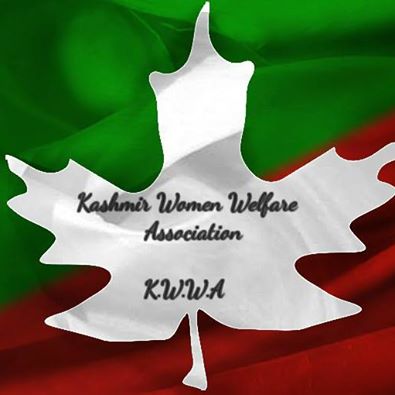 Interview with Imran Azaad from Kashmir.
The interview was taken by Sissy Vovou and Ioanna Memou, who also wrote the foreword.

Meeting in Greece a man who is a member of a women’s organisation in Kashmir and who is persecuted and prosecuted by extremist forces in his area is not very common. Mr. Azaad is a member of Kashmir Women’s Rights and Development Organization, from the area district Poonch, Rawalakot AJK of Pakistan occupied Kashmir. He was persecuted in his country one year ago and left for Europe, where is asking for political asylum on the basis of persecution due to women’s rights struggle.

The fight between India and Pakistan for the area of Kashmir started in 1947, after the departure of Britain from India. Since then, there have been military conflicts and wars and uprisings of the population who want independence of Kashmir. The population of Pakistan occupied Kashmir is today calculated to be nearly 5 millions, while India occupied Kashmir is more than 12 millions.

Only in the last 27 years, more than 70.000 inhabitants of Kashmir have been killed and many more wounded or imprisoned, in conflict with Indian and Pakistani military forces. Of course there have been many thousands of imprisoned by the Indian and Pakistani forces, who are calculated between 8.000 and 20.000 by human rights organisations. They are struggling for autonomy or independence, but there is no progress. 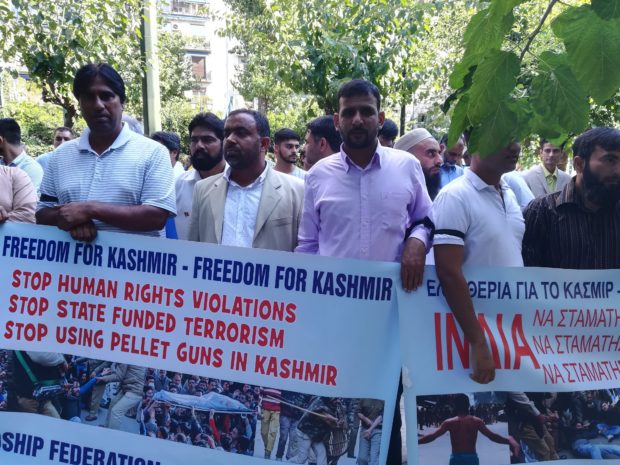 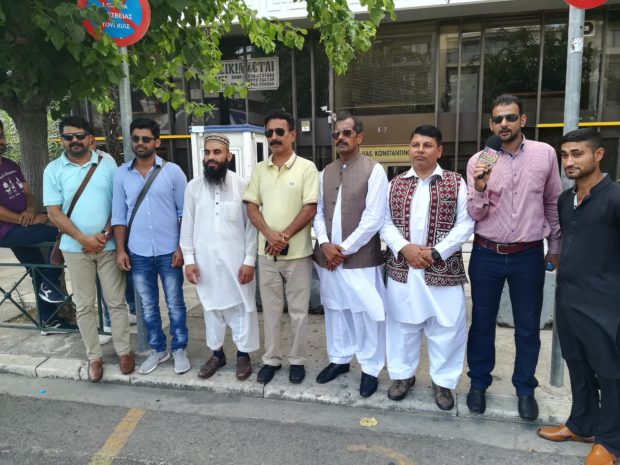 Demonstration Freedom for Kashmir, in Athens, August 2018, in front of the Indian Embassy. Mr. Azaad holding the microphone

Kashmir is the most militarised zone in the world. More than 700.000 of military personell of India is acting in this area. Also, about 200.000 Pakistani military personell. There is the highest rate of military versus civilians in the world. There is also represssion of the press. One example, a newspaper that wrote last year that 73% of the people want independence was banned.

Many protests have taken place in the course of all these years relating to women’s rights, for rape in war zones and conflicts and generally for any kind of violence against women. Many times women have risen against this violence, despite the strict life in which they are obliged to live.

An example of collaboration is Naila Khanin, aged about 60, who was working on women’s rights in Azad Kadhmir. She was vice chairwoman of UKPNP (socialist Democratic Party) and was collaborating with Kashmir Women’s Rights and Development Organization. She died in September 2018.

Many organisations for women’s rights or for human rights, are collaborating with state authorities. 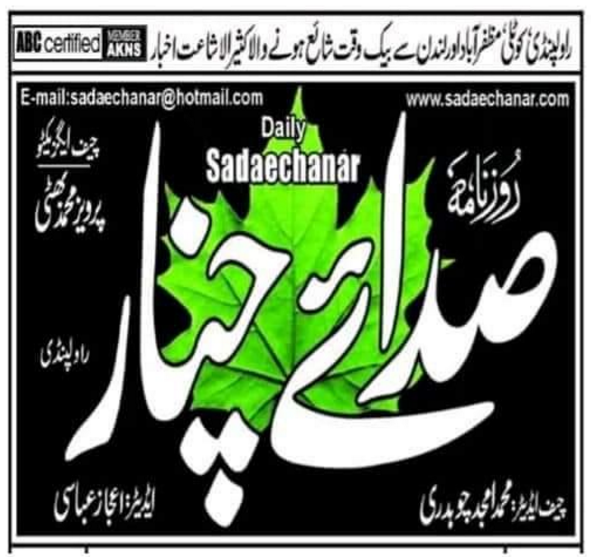 We posed questions to Mr. Azaad about everyday life and rights of girls and women, as well as about the organisation in which he participates:

— It is interesting to learn that, in a country that is so far from us and our experiences, there is struggle going on for gender equality and women’s rights. Of course we know about such struggles in the surrounding area, not only in India and Pakistan, but also in Afghanistan, where we have met extraordinary women’s rights fighters, like the Revolutionary Afghanistan Women’s Organisation. Can you tell us how is the position of women in the family there and how are the mentalities concerning women?

▶ In the northern areas, bordering with Afghanistan, the women are kept at home but they work with land and animals and they have to carry water, wood and food for animals. And the values in these areas are conditioned by the Pakistani army and by ideas of religious extremism.

— What about women in the cities?

▶ In cities there are some better conditions. They go to school but they pay privately and the parents accept to pay for some of the girls. About 90% of education of all grades have to go private for the kids that go to school.

In public education there are children, but many teachers who are not well educated for teaching use the old syllabus, which is outdated, but they get “good” wages as against the private schools, which have many children but few teachers, who use modern syllabus but get small wages. The teachers of public schools are appointed by municipalities and state, in the framework of favouritism. 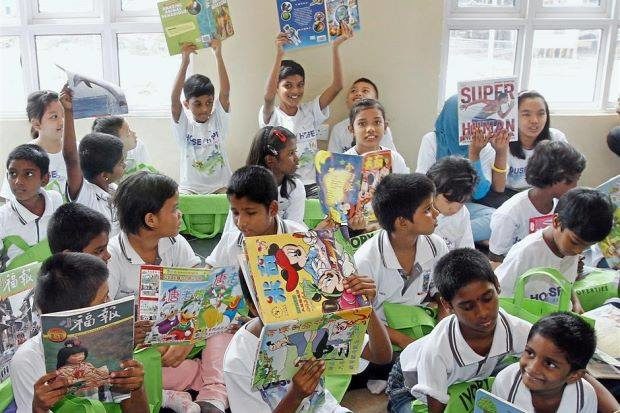 Photo of one of the activities of the organisation, giving books to children.

— What perentage of income do parents pay for private school?

▶ About 10%. We had some positive changes after the big earthquake of 2005 (more than 120.000 people died, two cities totally destroyed). International people came and gave informations on how to run the society. .

— What is the percentage of girls going to school?

— What is the age of marriage and what are the conditions for divorce?

Also, in many areas, Jirga (the council of elders in every area) decides to give girls for marriage as compensation to families which have suffered wrongdoing by other families.

— What are the motives of families that send girls to school?

▶ More than 80% of people send boys abroad. So they have to have some education. There are private schools in the afternoon. The same in public hospitals. Doctors have private clinics. After 2005 they were motivated by the Non Governmental Organisations (NGOs) and foreign people to send girls to school.

— Are there political parties that favour girls’ education?

▶ Some political parties are in favour of girls’ education, but they are not in parliament and they are not allowed to function publicly. Their names, National Awami Party, United Kashmere National People’s Party, Jamu Kashmir National People’s Party, United Kashmere. These parties are now allowed to take part in elections, they do function though. Also the Liberation Front (JKLF).

— Are the women obliged to cover their head by hijab?

— What about social life of the women? Do they go out to enjoy themselves?

▶ No one goes out, there is nothing in the villages, only the men occasionally go to a hotel cafe in the neighbouring citiy, to spend some time and to socialise. The women stay in the house.

— Are the women allowed to participate to demonstrations without the licence of their men?

▶ They have to take the licence or be accompanied. Demonstrations are mainly for national questions, and often they are met with repression. 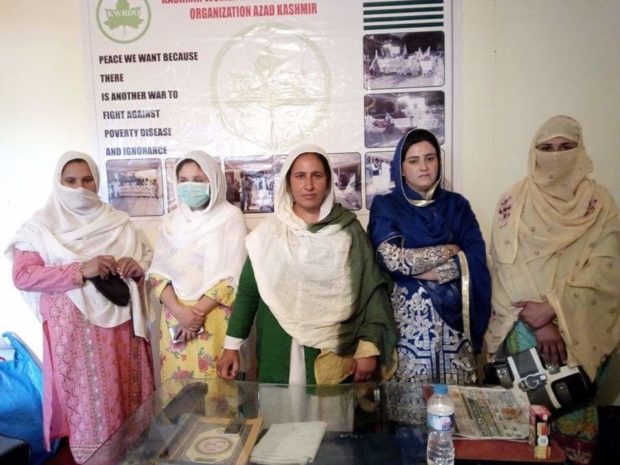 — Tell us more about your organisation, and the reason you were prosecuted.

▶ Our organiation is “Kashmir Women Rights and Development Organisation” and worked since 2007, but registered with Local Authorities in 2010. About 8 years ago, we made a campaign about family planning – we went door to door. But we faced too much pressure from religious and others. In previous decades, families had 6, 8 or 10 children. Now, more than 60% of the women make 2 or 3 children. We also motivate men for family planning. Medicine is provided by international organisation, UN Health Organisation.
Our organisation has more than 150 regular members women, about 100 regular members men. Many members help but from far away, in order to avoid problems of persecution and prosecution. All members are volunteers. Wa have a main office of the organisation in capital City District Headquarters. 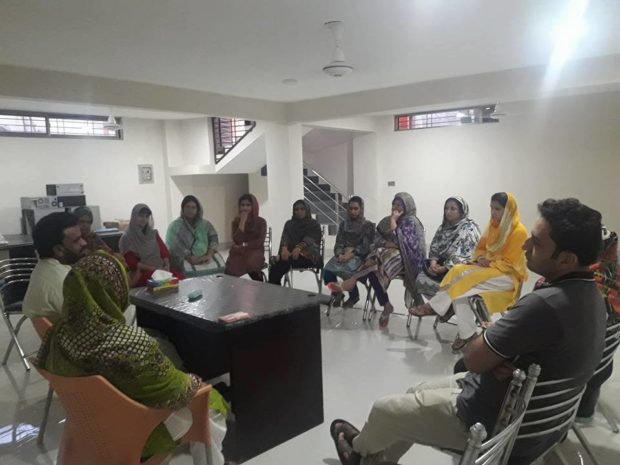 In the office of the organisation

28 October last year we started demonstrations. We had awareness programmes every month, in 3 or 4 places, in different towns.
In July they stopped because of Ramadan.

Then, there was a Fatwa issued against me, in November 2017 (photo and information at the end of the post). As an answer, there was one demonstration with more than 200 people, demanding to take back the Fatwa. The religious people called the police. There was conflict with the police. Women cannot be arrested, because there are not women in the police force. Only in the last two years some women were appointed in the police force.

In 2016 we had a demonstration outside the hospital district Rawhacut, because there was rape of a nurse by two men. We demanded the punishment of the rapists. For 5-6 days we sat in front of hospital main gate demanding the punishment. The nurse was with us. Two men did the rape, one was a nurse, the other military security. The place is near the border and is in a tribal area. We should note that in the cities there is no accountability of military and judges. 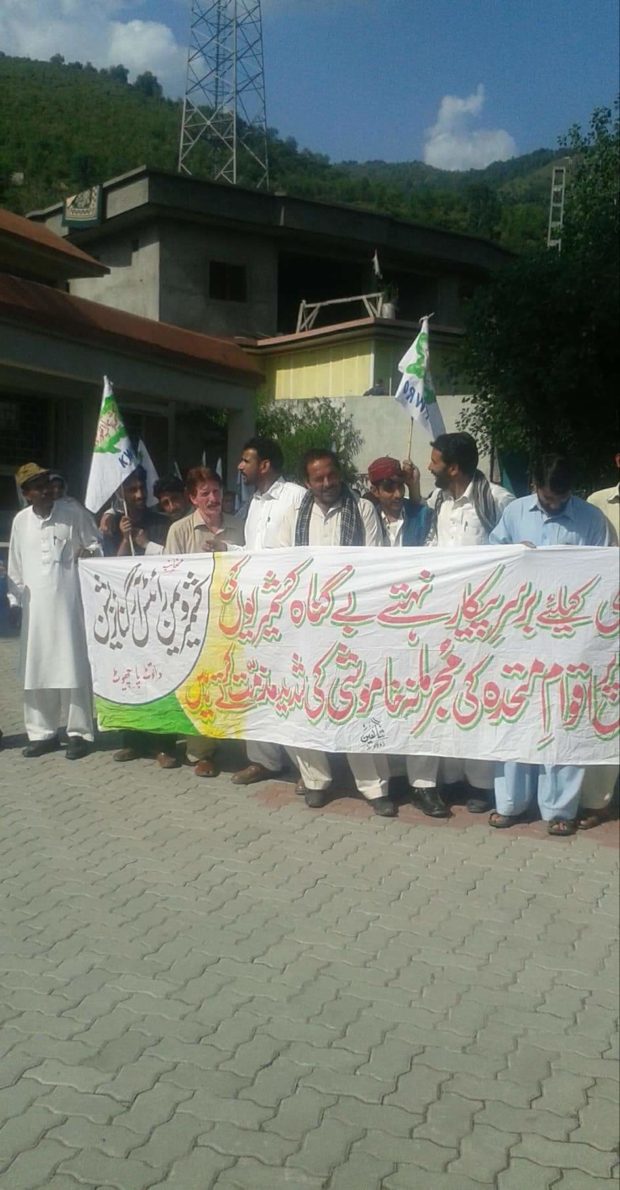 The photo in front of the hospital gate. Mr. Azaad second from the right. 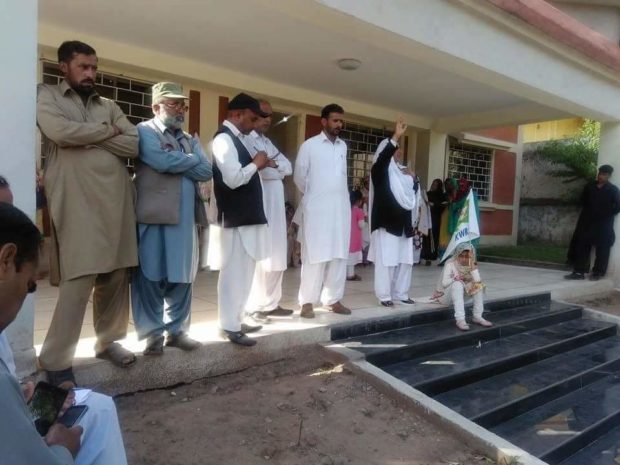 Subsequently to the protest in front of the hospital, myself and another three men were prosecuted by the police. I was taken prisoner for one week and I was also tortured and as a result I have permanent problems with my health. I managed to escape, and much later leave the country and come to Europe. The other three men also left the country, otherwise we would face long prison sentences. The organisation continues its function.

This interview will be published in our website, in English and Greek. We promised to come back to this discussion, in order to enrich the informations for our readers for this far away place. As we know, though, the struggle for women’s rights takes place everywhere.
The responsibility for the numbers and percantages in various fields referred in the interview by mr. Khan, lies with him. Of course we know that he spoke in the best of his knowledge.

Link for the organisation: Endlish translation of Fatwa: Today on 28th of October 2017 Muslim’s clerics council meeting was held in Central Mosque in Datoot (phoro below). This meeting was presided over by cleric Waseem ul Haqh president clerics council union council Pachiot 8. In this meeting they took strict and serious notice of Women’s Rights and Development Organization activities and said that this organization was carrying on anti- Islam activities by following foreign agenda. They issued a notice that Mr. Imran Azad vice chairman of Women’s Rights and Development Organization must stop his activities in this organization and distance himself from the organization , otherwise he would be stoned to death . They also blamed women’s Rights Organization for spreading obscenity and declared that there is no room for such things in Islam.