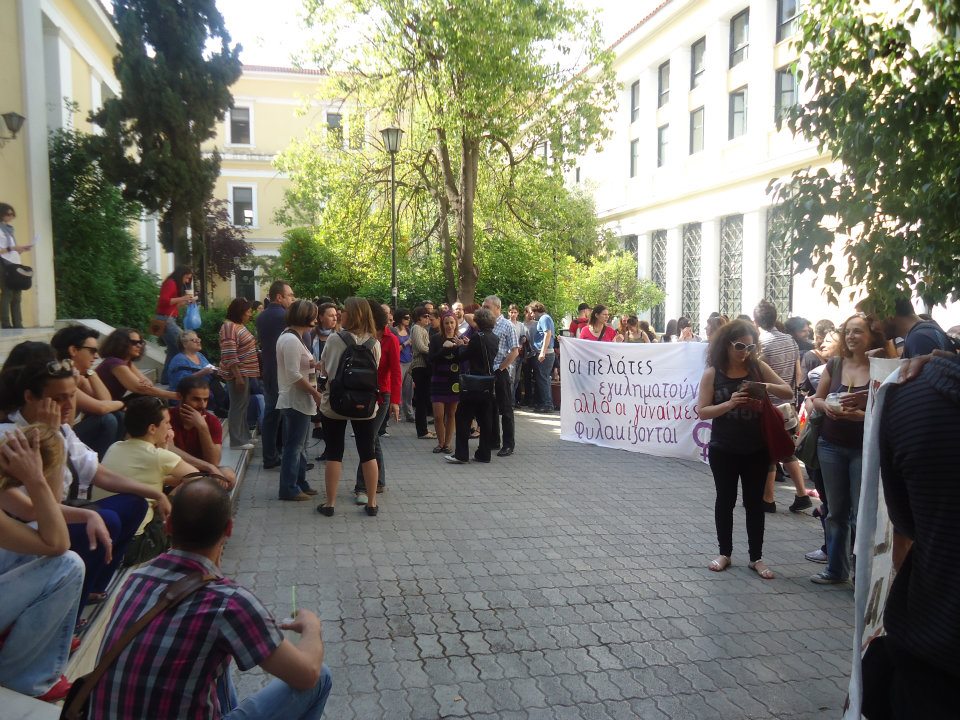 We are writing these lines in November 2018; 6 years after the Greek Ministry of Public Health and Social Solidary first issued Health Regulation No GY/39A, which gave the Greek police the power to detain drug users, amongst other groups, for forced HIV testing and compulsory hospitalisation and treatment (where deemed ‘appropriate’). The Health Regulation was issued amidst what was deemed a public health emergency. For the first time, the number of new HIV transmissions among people who inject drugs had exceeded the number of new cases reported among men who have sex with men. During the first seven months of 2011, new transmissions among people who inject drugs had increased more than tenfold. By 2012, approximately half of all newly reported HIV transmissions were linked to injecting drug use.

What followed has all the characteristics of a Greek tragedy, the difference being that modern Greeks showed a perverse sense of social [in]justice. During the time period the Regulation was in force, people who use drugs, and especially those who were suspected of engaging in sex work, were detained in police stations and submitted to forced testing for HIV and other infectious diseases, in police custody and often undergoing withdrawal.

Anecdotal evidence suggests that between April and December 2012, 2,160 people were detained under sex work legislation. Amongst those detained, women who use drugs were arrested and charged for causing intentional grievous bodily harm under Law 2734/1999. They were accused of knowingly and recurrently spreading HIV by engaging in survival sex – the hubris they supposedly committed.

In a misguided, to say the least, attempt to protect public health, Greek authorities decided to publicise the personal and confidential details of the accused; their photographs, names, places of residence, family details, and information from their medical records on their HIV-positive status. That was the nemesis imposed to them. A form of nemesis that encapsulates the weaponisation of stigma as a purported tool to protect public health. Pictures and personal details appeared in print and digital media, paraded in prime-time television; a vengeful form of nemesis the ancient Greeks called Adrasteia – one from which it is impossible to escape.

Objections were raised within Greece and internationally, highlighting blatant human rights violations. And, after months of government-sponsored crackdowns, the women accused were acquitted of all charges. Yet, to this very day, their details, medical records discussing HIV status and even photographs remain available online.

Greek authorities were quick to ascribe hubris and publicly inflict nemesis on the targeted women, with no exodus (i.e. conclusion) in sight.

Not long after, in Deus Ex Machina fashion, authorities publicly announced success. Indeed, in 2015 and 2016 the number of new HIV transmissions associated with injecting drug use began to fall, suggesting a stabilisation of HIV transmissions among this segment of the population.

However, this false sense of security that authorities were lulled into is worryingly misplaced. Greece is still crippled by structural factors that place its people at high risk for HIV outbreaks. The key barriers that hinder access to services for inadequately served populations have not been lifted; including policies and practices to tackle generalised stigma against populations in situations of vulnerability. 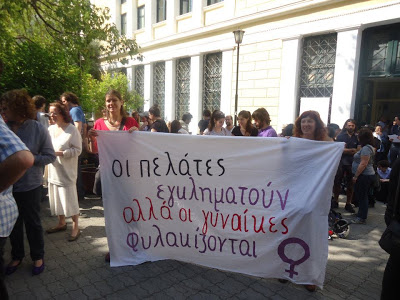 The two photos are from a protest in the court, where the imprisoned women were taken for interrogation. The banner says: The customers are the criminals, but the women are imprisoned.

More specifically, among others:

There is lack of adequate access to sterile injecting equipment. The number of syringes distributed in Greece in 2016 was 80 per person per year, a far cry from the 200 sterile needles and syringes per person per year recommended by the World Health Organization.

The 2008 financial crisis, and the austerity measures that ensued, led to significant reductions in the budget allocated to drug-related services. The budget for the Greek Organisation Against Drugs (OKANA), responsible for the delivery of harm reduction interventions in Greece, decreased its expenditure by 29% between 2009 and 2015. While this number increased in 2016, it has not reached pre-crisis levels.

Despite improvements, accessing opioid agonist treatment can still involve excessive waiting times. This is particularly the case in the Attica region (Athens), where most people who use opioids are situated, and where the estimated waiting time at the end of 2016 was up to two years.

Standard antiretroviral therapy (ART) is only provided within the premises of Special Units. Anecdotal reports from drug users highlight incidents of discriminatory, stigmatising or even violent behaviour towards them, with all the implications this may have for service accessibility.

In 2017, the number of new HIV diagnoses among people who inject drugs was marginally higher (86 new cases) compared to 2016 (81 new cases). Although this number represents an 84% decrease in comparison to 2012, it is still 438% higher than the 2010 number. The Greek Documentation and Monitoring Centre for Drugs interprets this could be interpreted as indicative of a continuing HIV epidemic among people who inject drugs.

Community empowerment has been identified as a critical enabler for the increased effectiveness of harm reduction policies and programmes, and as a way to redress human rights violations against the populations in question. However, in Greece, there is a marked lack of involvement of the peer community in harm reduction service design and delivery, including outreach work, as well as in the monitoring and evaluation of interventions.

Despite international good practice recommendations, drug use is still criminalised in Greece, with all the implications this has in relation to accessing services and suffering stigma and discrimination. In addition, the fact that the 2014-2020 Greek National Drug Strategy is still pending parliamentary approval does little to increase confidence in the seriousness of the political commitment to address drug related problems.

With collective memory weakening, and in the absence of decisive support for people who use drugs, what is to prevent another HIV-related witch-hunt in the future?

NB: Hubris and nemesis are two archetypical situations in the tragedies of ancient Greece. The former characterises outrageous acts that contravene the established moral codes, while the latter defines the punishment of hubris, often by divine intervention.