Paris-Geneva, January 11, 2019 – Human rights defender Israa Al-Ghomgham will appear before the Specialized Criminal Court in Riyadh on January 13, 2019 for participating in peaceful pro-democracy protests. After spending more than three years in arbitrary detention, she faces the death penalty and, if convicted, would be the first female human rights defender sentenced to death in the Kingdom. The Observatory calls for her immediate and unconditional release.

On January 13, 2019, Ms. Israa Al-Ghomgham, a human rights defender from the region of Qatif, an eastern coastal city with a Shia majority, will appear before the Specialized Criminal Court – a jurisdiction originally set up to prosecute terrorist acts which is in fact dealing with so-called cases affecting “national security” and has been criminalising dozens of peaceful activists, including human rights defenders.

The Observatory expresses its great concern over the physical and psychological integrity of Ms. Israa Al-Ghomgham, especially as she does not have access to her lawyer, who never got the authorization to meet with her before the hearings, and as she failed to attend the two precedent hearings, on October 28 and November 21, 2018 respectively. The reasons for her non-attendance remain unknown. The Prosecutor called for the application of the death penalty. Saudi Arabia executes death penalty mostly by beheading.

“We should not be misled by the apparent openness driven by Mohamed Ben Salman. The reality is that dozens of human rights defenders, including women, are arbitrarily detained and are exposed to torture. This fact reminds us that Saudi Arabia is still one of the most repressive country for human rights in the world. Israa Al-Ghomgham must be immediately released!”, said Alexandra Poméon O’Neill, Director of the Observatory at FIDH.

“Sentencing Israa Al-Ghomgham to death would send the most horrible signal to other human rights activists in the country. Increased repression against women’s rights defenders currently detained in the Kingdom is also to be feared. The international community cannot ignore Saudi Arabia’s attacks on human rights anymore. Such a horrendous prospect has to be stopped”, said Delphine Reculeau, Director of the Observatory at OMCT.

Ms. Israa Al-Ghomgham took part in peaceful pro-democracy demonstrations since 2011, during the Arab Spring, documented mass demonstrations in the Eastern provinces, and called many times for the respect of freedom of assembly and expression, the release of prisoners of conscience and human rights defenders and used to express her opinion on social media platforms. She was arbitrarily arrested on December 8, 2015, after the Saudi authorities launched a raid at her home, arresting her and her husband. She has been detained in Dammam’s al-Mabahith prison until now. 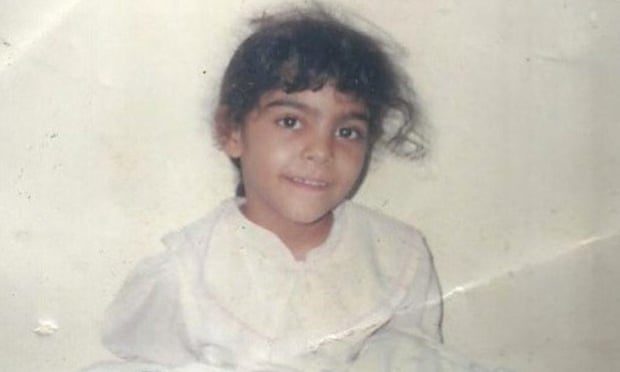 This is the only photo of Israa Al-Ghomgham available, as a child

The Observatory for the Protection of Human Rights Defenders (the Observatory) is a partnership created in 1997 by the FIDH and the World Organisation Against Torture (OMCT) and aims to intervene to prevent or remedy concrete situations of repression against human rights defenders. FIDH and OMCT are both members of ProtectDefenders.eu, the European Union mechanism for human rights defenders implemented by international civil society.

According to data in THE GUARDIAN, only in the first four months of 2018, 48 people were executed in Saudi Arabia. 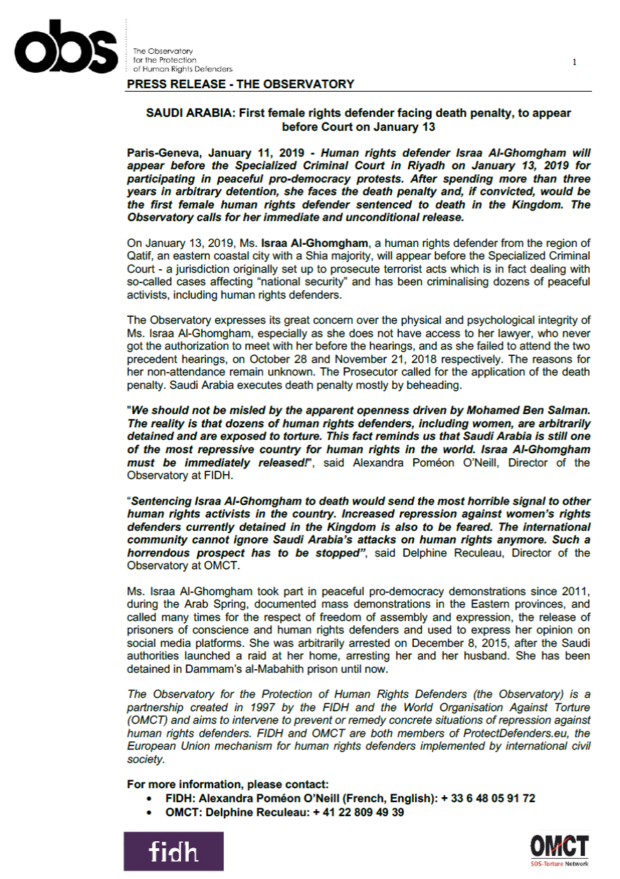