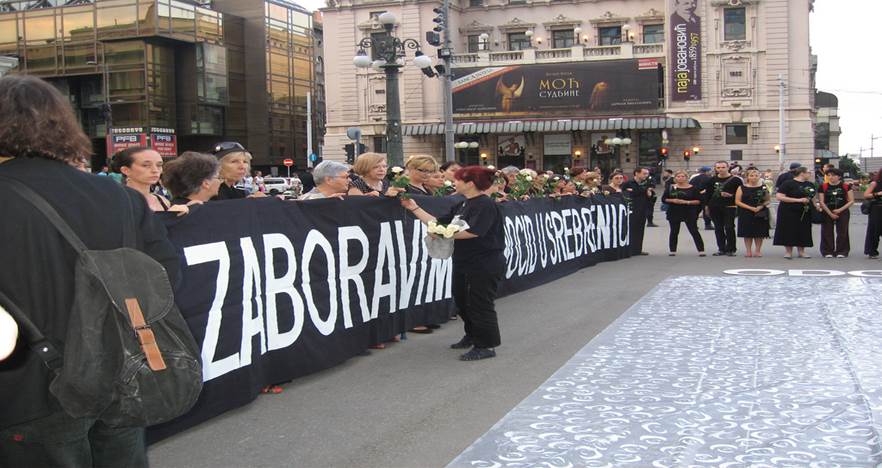 Women in Black, Madrid, recently published the call that follows

A presentation of the international network follows

2019 CALL FOR PEACE IN EUROPE FROM MADRID, SPAIN, WOMEN IN BLACK AGAINST WAR

A hundred and four years ago, more than one hundred English pacifist women wrote a letter to women in Germany and Austria calling for working together for peace.

At the beginning of 2019 we, Women in Black Against War from Madrid, believe that it is necessary to make a new call for peace in Europe.

We are concerned about the rise of fascisms that are taking advantage of popular discontent to grow in Europe. The far-right parties hold openly xenophobic, retrograde and anti-feminist speeches that are complacently permitted by the political and economic elites and reproduced uncritically by the media, giving the impression that those speeches are as valid as any other political position. But they are not. It is not acceptable the degree of dehumanization and backwardness that the messages of the far right contain and that are gradually penetrating in European societies, as it happened 80 years ago.

But we are even more concerned that Europe is at war here and now. Yes, Europe is at war on its borders. It is an open war against migrants and poor people, refugees, people fleeing hunger and climatic disasters. It is not a war that has been declared in international forums legally, or that is fought with bombs and missiles, but it has been killing thousands of people for years. Europe carries out war actions whenever a small boat with dozens of people is not rescued, leaving it to sink in the Mediterranean Sea; every time a safe harbor is denied to a rescue boat full of people, contravening the basic pillars of international naval law, or whenever a country closes a border with fences.

The European Union does not stain its hands with blood, because we Europeans are civilized. These services are outsourced and carried out by Morocco, Turkey or Libya. For example, the agreements with Morocco include financial aid and the implicit commitment that Europe does not question the abuses of Human Rights in the country. In return, Morocco accepts the “hot return” of migrants detained in the fence of Ceuta and Melilla, or even people already detained in the continent. It is known that sometimes the way to “manage” the problem that Morocco has had is to abandon them on its southern border, in the Sahara desert, without water or food, that is, Morocco has applied them a slow and inhumane death penalty.

The situation of migrant women is even worse, because in addition to being exposed to the same hardships, they are harassed by sexual violence, trafficking and the lack of specific resources for women. If migrants in general find thousands of obstacles to reach their destination, migrant women bear the brunt for they are victims of all kinds of abuses just for the fact that they are women.

Also children who are forced to leave their home and their family in search of a future are innocent victims of this war on the border. When they arrive in Europe they are harassed as criminals and denied their most basic rights: to education and dignified living conditions. Unaccompanied minors often end up sleeping on the street, where they suffer violence of all kinds and are forced to scrape by begging or committing petty theft, as Oliver Twists of the Twenty Fist Century.

We European anti-militarist and feminist women cannot remain silent in front of the European fortress that is being built around us. We do not want to be moral referents of anything, but we cannot stand by. Welcoming thousands of migrants is not charity, it is justice, because we are aware that our level of life and waste is based on the plundering of other peoples and territories. That is why we want to appeal to all the women of the Network so that, with regard to the forthcoming European elections, in resistance against xenophobic migratory policies, they will join the European action of May 5, “The embrace of the Peoples”.

We believe that another world is possible, that we can build a society based on Human Rights and a society that welcomes people with generosity and empathy wherever they come from. We also believe that we can create other economic relationships that do not imply the depletion of natural resources or the exploitation of others. We want to build new ways of living respectfully with others and with the planet. We want to build a better world together. 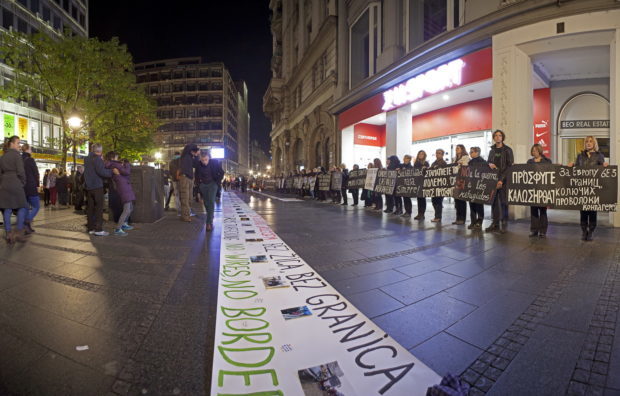 Blegrade, 2016, mobilisation on the occasion of the 25th anniversary of WiB

Women in Black is a world-wide network of women committed to peace with justice and actively opposed to injustice, war, militarism and other forms of violence. As women experiencing these things in different ways in different regions of the world, we support each other’s movements. An important focus is challenging the militarist policies of our own governments. We are not an organisation, but a means of communicating and a formula for action.

WiB vigils
Any group of women anywhere in the world at any time may organize a Women in Black vigil against any manifestation of violence, militarism or war. Women in Black (WiB) actions are generally women only. Our actions often take the form of women wearing black, standing in a public place in silent, non-violent vigils at regular times and intervals, carrying placards and handing out leaflets.

Other non-violent actions
We use non-violent and non-aggressive forms of action. In addition to vigils Women in Black groups use many other forms of non-violent direct action such as sitting down to block a road, entering military bases and other forbidden zones, refusing to comply with orders, and “bearing witness”. Wearing black in some cultures signifies mourning, and feminist actions dressed in black convert women’s traditional passive mourning for the dead in war into a powerful refusal of the logic of war.

A worldwide movement
It is impossible to know exactly how many Women in Black groups exist, how many women they include and how many actions have been held. When Women in Black in Israel/Palestine, as part of a coalition of Women for a Just Peace, called for vigils in June 2001 against the Occupation of Palestinian lands, at least 150 WiB groups across the world responded. Countries reporting vigils included: Australia, Austria, Azerbaijan, Belgium, Canada, Denmark, England, France, Germany, India, Israel, Italy, Japan, Maldive Islands, Mexico, Netherlands, Northern Ireland, Spain, Sweden, Switzerland, Turkey, and the USA. The organisers estimate that altogether 10,000 women may have been involved.

International women’s solidarity
International Women in Black conferences and encounters have been held in Jerusalem, Beijing, Serbia, and Brussels, Italy, Spain, India and will take place in South Africa in 2018. In 2001 Women in Black was awarded the Millennium Peace Prize for Women by the United Nations Development Fund for Women (UNIFEM) and International Alert. Women in Black in Israel/Palestine and former Yugoslavia (Serbia) were also nominated for the Nobel Peace Prize and the Right Livelihood Award.

A feminist perspective
Women in Black groups do not have a constitution or a manifesto, but our perspective is clear from our actions and words. It is evident for instance that we have a feminist understanding: that male violence against women in domestic life and in the community, in times of peace and in times of war, are interrelated. Violence is used as a means of controlling women. In some regions, men who share this analysis support and help WiB, and WiB are supporting men who refuse to fight.

Women’s different experience of war
Women-only peace activism does not suggest that women, any more than men, are “natural born peace-makers”. But women often inhabit different cultures from men, and are disproportionately involved in caring work. We know what justice and oppression mean, because we experience them as women. Most women have a different experience of war from that of most men. All women in war fear rape. Women are the majority of refugees. A feminist view sees masculine cultures as specially prone to violence, and so feminist women tend to have a particular perspective on security and something unique to say about war.

Women’s different and varied voices
WiB includes women of many ethnic and national backgrounds, co-operating across these (and other) differences in the interests of justice and peace. We work for a world where difference does not mean inequality, oppression or exclusion. Women’s voices are often drowned out in mixed actions of men and women. When we act alone what women say is really heard.

Choosing our own forms of action
Sometimes even peace demonstrations get violent, and as women alone we can choose forms of action we feel comfortable with, non-violent and expressive. Demonstrating together can give us a sense of the richness and scope of our varied experiences, and solidarity and purpose as women. Women in regions differently situated in relation to armed conflicts, including those that perpetrate violence and those that are victims of it, can lend support to each other. Together we can educate, inform and influence public opinion, and so try to make war an unthinkable option.

The initial image is from a mobilisation in Serbia