Open letter  To people of good will, solidarising with victims of the Christchurch massacre 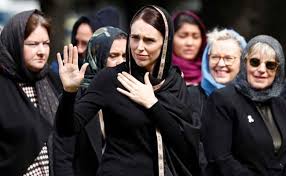 In response to massacres perpetrated by extreme-right white supremacists in 2 mosques in New Zealand on March 15 2019, several symbolic actions took place that aimed at conveying to Muslims – who were attacked as such, since they were praying in the mosque when it happened – that they could count on their fellow citizens’ solidarity. New Zealand’s Prime Minister was praised the world over for her humane response to the massacres.

While being moved by the generous intentions which motivated these symbolic actions, we nevertheless take distance from some of these which, in fact, will further increase the alas already prevaling confusion between personal religious faith and communal identity politics.

Here are two exemples.
New Zealand Prime Minister Ms Jacinda Ardern, followed by other officials (and then by ordinary citizens as well) saw it fit to wear a so-called Islamic head covering during their public functions.

We believe that there were many other symbols that could have been chosen in order to comfort Muslim believers, than one which is contested the world over by women of Muslim heritage, – believers and unbelievers alike.

Rather, it comforts fundamentalists in their efforts to gain political visibility through their wide spread promotion of the veil, thus also asserting their grip over Muslims and over Islam itself.

Iranian women – who, for the past few months, have been thrown into prison, flogged and tortured for taking out publicly that very veil which, for decades, has been imposed on them by law, and who have been holding it on a stick at crossroads in silent peaceful individual protests – may not, actually, feel very much conforted by these well meaning New Zealand’s top official women. Alas, it does not seem thay enjoy the same degree of support from the authorities and the people of New Zealand.

Nor are Algerian women who a few days ago commemorated in street demonstrations the numerous women and girls who were murdered in the nineties by fundamentalist armed groups for not covering their heads.
Nor are the women everywhere in Muslim contexts, from Mali to Afghanistan, from Sudan to Aceh, Indonesia, or throughout the Middle East, who were repressed and/or killed for the same reason, whether by fundamentalist states or by fundamentalist non-state actors.

No doubt, neither New Zealand PM nor those who followed her are aware of having made an unholy political choice by selecting the wrong symbol for expressing solidarity with victims. But isn’t it problematic, at such a high level in politics ? At the times of Al Qaeda and Daesch – i.e. when no one in the world can pretend to ignore what happens to women who do not conform – isn’t doning the veil somehow short sighted ?

Could they not find another symbol – less contested, less charged with women’s oppression – for Islamic identity, if that is the identity they wanted to emphacize? Any progressive scholar of Islam could have suggested more progressive and less anti-women alternatives. (What about zakat ( charity) for instance : it is one of the pilars of Islam, while the veil is definitely not one… ). And they could also have reflected on more secular symbols to re-assure the affected Muslims into their citizens’ rights to protection and equality of treatment.
°

Meanwhile – under the same pretext of respect for Christchurch victims, – the Mount Royal University’s autorities in Calgary, Canada, just de-invited Mr Armin Navabi, an Iranian-Canadian ex-Muslim atheist, who was scheduled to deliver a talk a couple of days ago. Mr Navabi had been invited by the Atheist Society of Calgary. He was persecuted in his country of origin for being an atheist; he is the founder of Atheist Republic, an online news and information site designed to provide support to “non-believers around the world.”
Said Navabi after being de-programmed:“ “What do they want? Do you want to have less conversation? Isn’t less conversation exactly what leads to people having extreme radical positions? I mean the less words exchanged between us, the more fists and bullets are going to exchange between people. Having more conversations is exactly what you need in the face of some tragedy like this”. That seems a pretty reasonable and dispassionate view, certainly not one which should be censored.

De-programming Mr Navabi is clearly taking side against those of us who fight for freedom of conscience and freedom of expression, and for Muslim fundamentalists who deny us these rights. The University authorities hinted at the fact that they were pressured by students and staff.
°
Rather than solidarity with victims, in both these exemples we see, alas, government and intellectual authorities taking – witingly or un-witingly – a political stand in favour of the Muslim extreme-right ; a stand that is also conforting the fundamentalist claim to be the only ones who truly represent Islam, Muslim believers and all citizens of Muslim descent.
°
While indeed solidarity is very much needed, we call on well-meaning people to select other symbols when showing solidarity with the Christchurch massacre’s victims. Symbols which would not lead to ideological compromising with the Muslim far-right, under the pretext of fighting the anti-Muslims xenophobic far-right.

It would be a major disaster if the racist homicides perpetrated in Christchurch against Muslim believers would, in the end, benefit the Muslim extreme-right. Let’s make sure it does not happen.

Marieme Helie Lucas is an Algerian sociologist, activist, founder of ‘Secularism is a Women’s Issue,’ and founder and former International Coordinator of ‘Women Living Under Muslim Laws.