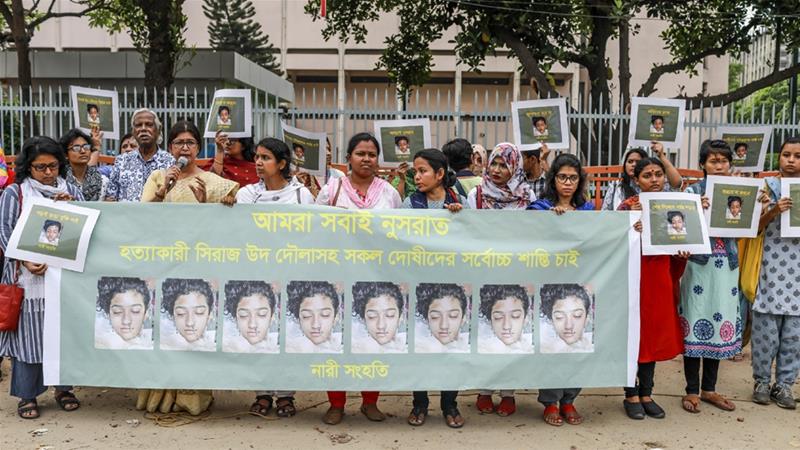 The 19-year-old was killed after she accused a teacher of harassing her, sparking protests in the South Asian nation.
Bangladeshi women hold banners and photographs of schoolgirl Nusrat Jahan Rafi at a protest in Dhaka [AFP]

19 April 2019 – A schoolgirl was burned to death in Bangladesh on the orders of her headteacher after she reported him for sexually harassing her, police said on Friday.

Rafi was lured to the rooftop of the religious school she attended where her attackers asked her to withdraw the sexual harassment complaint she had filed with police.

When she refused, she was doused in kerosene and set on fire. On April 10, she died from the burns, which covered 80 percent of her body.

Police said on Friday that one of the 17 people arrested in connection with her death had accused the school’s principal of ordering the attack.

The principal “told them to put pressure on Rafi to withdraw the case or kill her if she refused“, senior police superintendent Mohammad Iqbal, who is leading the investigation, told AFP.

Rafi had gone to the police in late March to report the sexual harassment, and a leaked video shows the local police station chief registering her complaint but dismissing it as “not a big deal“.

Iqbal said at least five of those under arrest, including three of Rafi’s classmates, had bound her hands and feet with a scarf before setting her on fire.

“The plan was to pass the incident off as a suicide. But it fell through after Rafi managed to come downstairs while on fire because the scarf burned and freed her hands and feet,” he said. 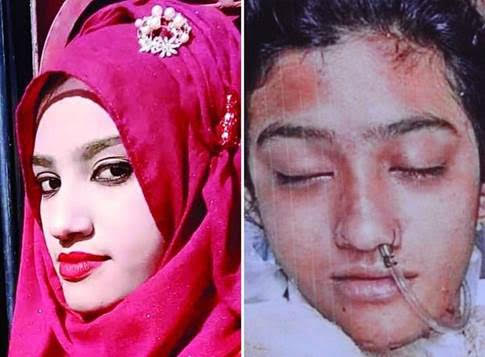 In the he ambulance, fearing she might not survive, Rafi recorded a statement on her brother’s mobile phone.

“The teacher touched me, I will fight this crime till my last breath,” she said. She also identified some of her attackers.

According to local media reports, Rafi also wrote a letter in her class notebook, before she was set on fire, describing how the principal sexually assaulted her.

Two young men have confessed involvement in Rafi’s killing. They include a man who admitted to holding a grudge against her for refusing his own advances.

Her family members said they have been receiving threats from the principal’s supporters since the filing of the case in March.