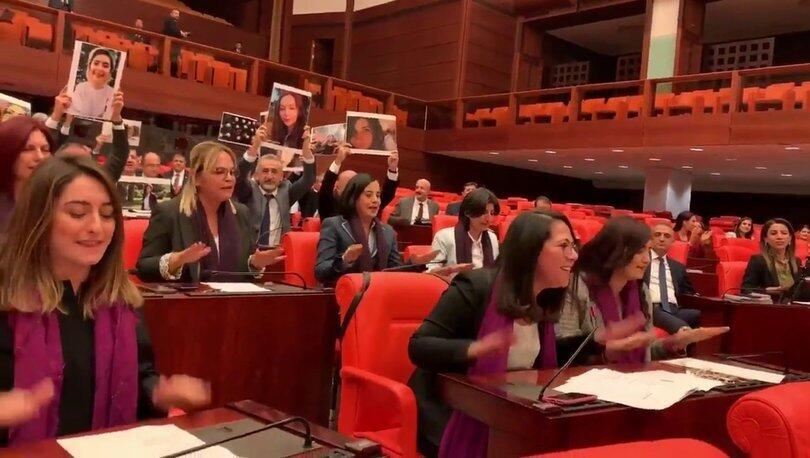 The protest was initiated by CHP lawmaker Sera Kadıgil during budget talks in parliament and was broadcast live on the Turkish Grand National Assembly TV.

“Mr. Interior Minister, there is a dance that started in Chile to draw attention to violence against women all over the world: Las Tesis. Thanks to you, Turkey is the only country to have [legislative] immunity to perform this action. Now, as women lawmakers, we will have two words for you on behalf of all women who have been subjected to violence,” she said.

Responding to the protest in parliament, Soylu stressed that each murdered women is a common pain for Turkey.

Soylu underlined the expressions in the lyrics of the song, saying, “If this issue is to be solved by saying these things, let parliament hear it. I am the interior minister, despite the law, despite the Constitution, I will use my widest right [to solve this issue],” he said.

“You are the rapist, you are the killer; cops, judges, state and president,” the lawmakers chanted, repeating the original lyrics of the song.

On Dec. 8, police dispersed a protest in Istanbul where women sang their rendition of the feminist protest song “A rapist in your path,” which has gained popularity around the world after it was first performed in Chile.

Violence against women is a widespread problem in Turkey. Women’s rights groups have blasted the Turkish government for not tackling the issue and for seeking to impose a conservative ideology that oppresses women.

According to figures provided by Kadın Cinayetlerini Durduracağız Platformu (We Will Stop Femicides Platform), which keeps a tally of femicides across the country, some 405 women were killed by men in Turkey in 2019.ISTANBUL