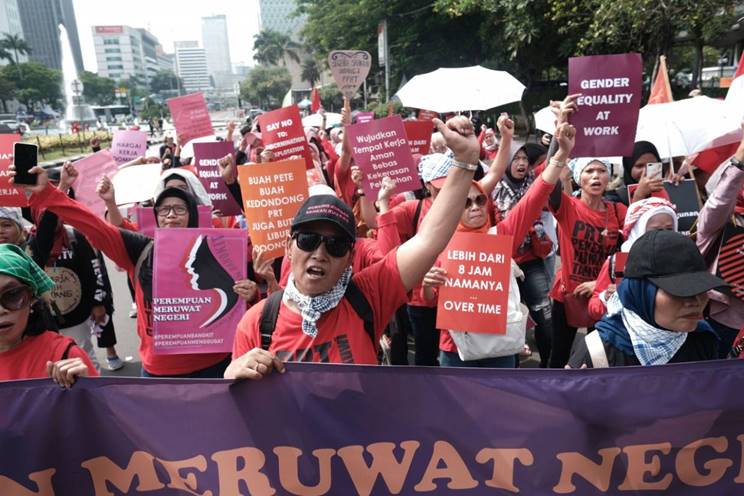 MANY BACKGROUNDS – CALL FOR RIGHTS & JUSTICE

Photo: Women from all walks of life taking to the streets during the ‘Perempuan Meruwat Negeri’ (Women Heal the Nation) rally in Central Jakarta on Sunday (Dec 22). The rally was held to reclaim Dec 22 as women’s awakening day instead of Mother’s Day as declared by first president Soekarno. – Jakarta Post/ANN

Hundreds of women from all walks of life, including young professionals, labourers, domestic workers and breastfeeding mothers, gathered at the Arjuna Wiwaha Statue (Horse Statue) and marched toward Aspiration Park near the Presidential Palace compound.

The date, Dec 22, was chosen as it was the anniversary of the first Indonesian Women’s Congress, which was held in 1928 and advocated for girls’ education and ending child marriage. The day was officially declared as Mothers’ Day by then-president Soekarno in 1958 and has since been identified more with women’s role as mothers rather than the women’s rights movement.

“The congress spoke about many problems that women faced, such as violence against women, women’s lack of access to education and the lack of access to many other things. That was in 1928 and now it’s 2019 and we still face the same problems, ” Valentina Sagala, spokesperson of the Women Rise Alliance that organized the demonstration, told protesters at the Aspiration Park. “We, the women of Indonesia have gathered here today to call on the state to really be present to fulfill our rights as women.”

The demands and motivations of the protesters were many and wide-ranging, as would be expected given their diverse backgrounds.

Dea Safira, a 27-year-old dentist and a co-founder of the Indonesia Feminis community, said that she and members of the Seni Berlawan Perempuan (SBP) collective joined the demonstration because they wanted to reclaim Mother’s Day for the women’s movement.

“This is really Women’s Day, but it has been co-opted to become Mothers’ Day by the New Order so we want to change this perception, ” Dea told The Jakarta Post on the sidelines of the demonstration. “We want to let people know that women have held congresses since a long time ago and from that time the demands haven’t really changed, but the state never listens.”

Dea and the other SBP members performed a dance in front of the protesters decrying violence against women and urging the passing of the long-awaited antisexual violence bill.

“This must be stopped: rape, harassment, violence, murder, whose victims are women, ” the SBP members chanted as they danced. “This is not my fault, not my clothes’ fault. This is not my fault; it’s the fault of your brain and your mouth and the patriarchy.”

Leila, a member of the Pasundan Farmers’ Union, meanwhile, focused on the need for agrarian reform.

“Even after 74 years of Indonesian independence, farmers in the villages, especially women, are impoverished because there are no just land rights for women in rural areas, ” Leila said in her oration at the demonstration. “Women are not heeded. That’s why our organization has fought for land rights and agrarian reform since 2000.”

The demonstration was also attended by members of the Indonesian Breastfeeding Association (AIMI), who brought their children and breastfed them at the sidelines of the event.

AIMI chairwoman Nia Uma, who brought her three daughters with her, including 15-month-old Naqia, said that the government had yet to completely fulfill the rights of breastfeeding mothers and their children.

“There are still a lot of products marketed as breastmilk substitutes and there are still no comprehensive health services for breastfeeding mothers, ” Nia told the Post. “We hope that this can be a good moment to demonstrate to everyone that women have reproductive health rights, including the right to breastfeed.”

The event concluded with a ruwatan (healing ceremony) led by women farmers from Kendeng, Central Java, who have long protested against the construction of a cement plant in the area.

The farmers prepared a variety of foods to serve as ubo rampe (a symbolic offering for the ceremony), including a tumpeng (cone-shaped serving of rice) symbolizing the prosperity of the country, a jar of water symbolising the blessings of Mother Earth and lepet (steamed sticky rice cooked in plaited palm leaves) symbolizing the need for correcting mistakes. –