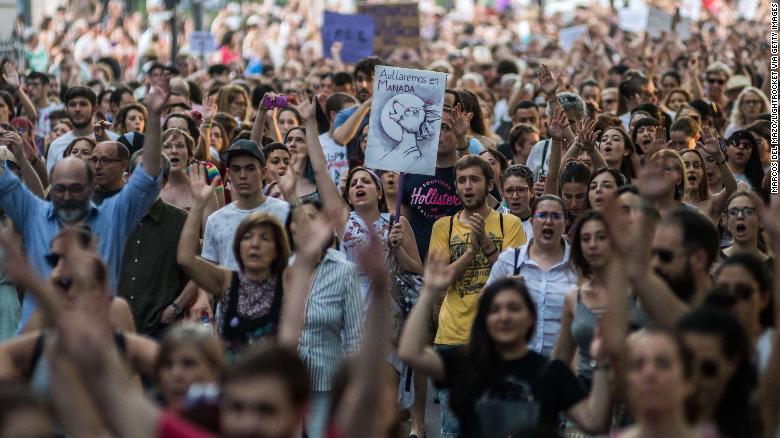 Madrid, Spain (CNN) Four of the Spanish men convicted in 2019 of raping a woman in Pamplona have been sentenced to further prison terms for a separate case of sexual abuse that occurred months earlier. Five men, known as the “wolf pack” were sentenced to 15 years in prison in June 2019 over the Pamplona rape. Four were arrested after the ruling, leaving one at large.

On Thursday a judge at Spain’s Cordoba Criminal court handed the four men additional prison sentences, after the group was convicted of sexually abusing a young woman in the southern city of Cordoba in May 2016.

The victim fell unconscious for “unknown reasons” before the abuse, according to the court’s written judgment.

The four men then “began to touch the victim’s chest both inside and outside her clothing” and one of them “even kissed her on the mouth,” the document added.
“While they were carrying out the touching, one of the accused made the (video) recording of said acts, with the prior acceptance of all others,” the court said.
The four men were also given a joint fine of 13,150 euros ($14,775).

One of the men was sentenced to an additional four years and six months in prison, while the other three will serve an additional two years and 10 months each. The group was also found guilty of privacy abuse, as well as sexual abuse.
The court gave the harsher sentence to the man who “disseminated the recorded images through two WhatsApp groups of which both the investigated and third parties were part,” according to the judgment.

The Pamplona assault occurred just weeks after the Cordoba one, in July 2016 at the city’s annual running of the bulls event. That case shocked Spain and prompted widespread outrage, after the men were initially convicted of sexual abuse but cleared of gang rape charges in December 2018.

The original ruling was made on the grounds that Spanish law requires evidence of physical violence or intimidation to prove a rape charge, a stipulation that has since been brought into question.
The country’s Supreme Court later reversed the decision and upgraded the group’s convictions.

Cover photo: People in Madrid protest against a court’s decision to release the “wolf pack” gang on bail on June 22, 2018.