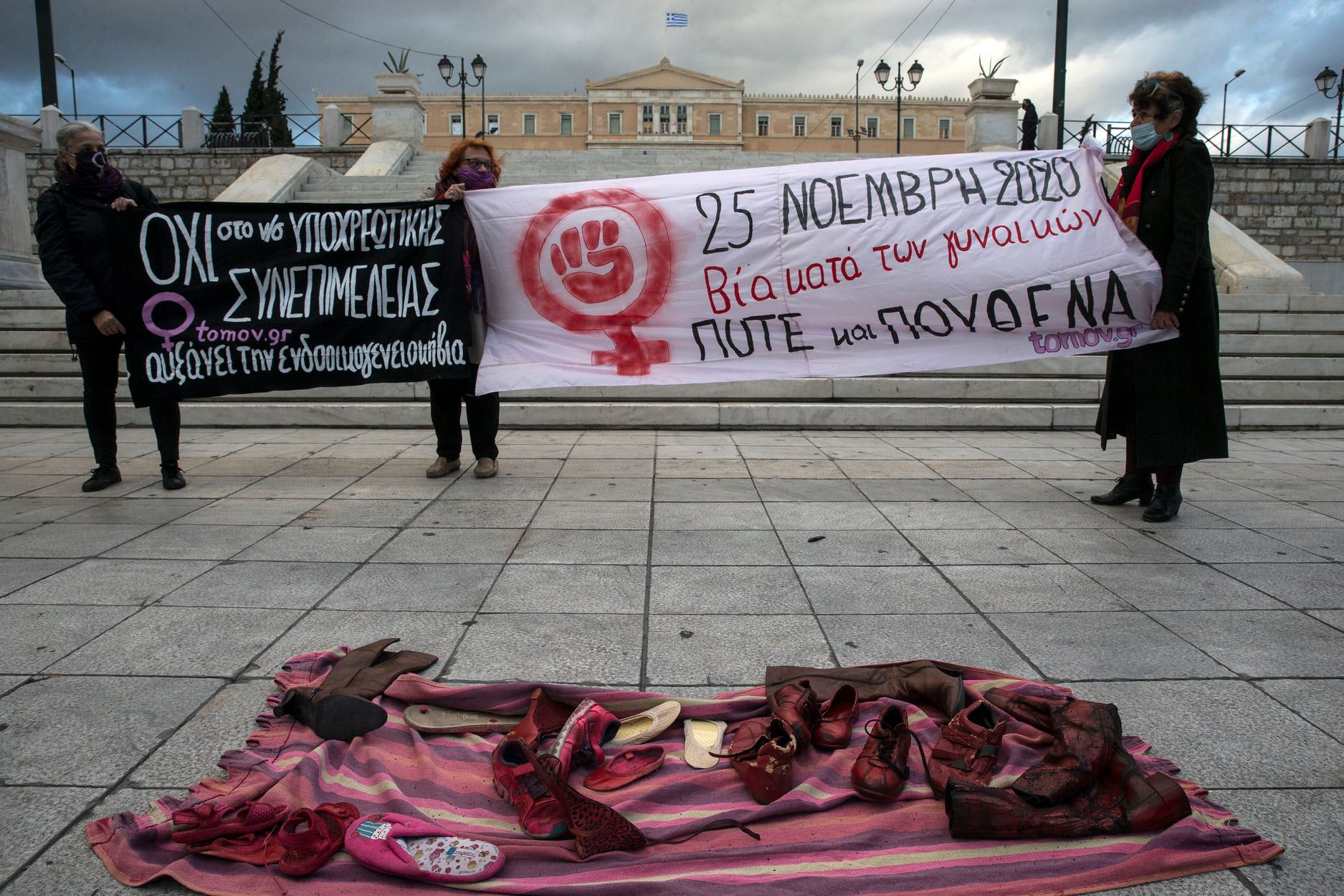 A different 25th of November, International Day for the Elimination of Violence Against Women. The small meetings which some of the feminist-women’s organisations had prepared, were turned into massive arrests, after hours of waiting in the police Station of Syntagma.
14 persons-women were taken to this specific Police Station (adducted), from 16.30 until 18.30, among which 2 men solidarians.  Of the 14 persons, 11 were officially arrested and charged. The court case will take place some time in the future. The only reason they were not kept for the night into the police station, was the danger for spread of Covid.

Why were we taken into the police station? We were not told initially. Hours later, when they were completing the arrest warrant, we were told that we are arrested according to the article 285 of the Penal Code, for the creation of hugienic danger.
They imposed a fine of 300 euro to each person, for “wandering without purpose”. The fine was post-timed, obviously in order for the police to hide the long detention. Therefore illegal. No-one signed the fine, according to wise advice we got.

Moving was the solidarity presence of 7 women lawyers who did the best for us, while one of the arrested was deprived of the right of presence of the lawyer during her registration, which we denounce as police bullying. She was very strongly pressed to sign.

Very moving also the presence of solidarians outside the Police Station, which had no enough space inside for all the detainees according to the measures for social distancing, thus we spent the hours on the narrow road, which was protected though by heavily armed policepeople, in the two exits.
In front of the Police Station slogans, banners (as the initial photo shows), while at about 19.00 hours more riot policemen come armed with everything, in order to create the atmosphere of omnipotence of the police as against detained citizens whose sole weapon was a banner or a plackard. The head policewoman in the police group of Syntagma Square, who had arrived in the police station meanwhile, said she called for reinforcements because “she was under psychological pressure”. 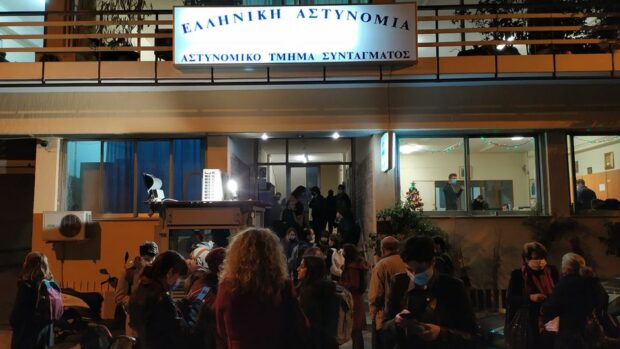 Present for solidarity in our protracted stay in the P.S. Were the Members of Parliament of the party MERA25 (DIEM 25) Maria Apatzidi and Giorgos Logiadis as well as the press representative of the party mr. Kritharidis, while inside Parliament our arrests were denounced by the party MERA25 and the Communist Party who demanded, in vain, our release.

A valuable, as usual, presence of the photojournalists in Syntagma Square Tatiana Bolari and Marios Lolos, whose photographs played an important role in the exposure of the illegal acts of the police.

Timetable of the arrests:

At 4 in the afternoon, our organisation TO MOV (meaning the purple colour) had called for a public protest for the international day. At this time, we were 4 women. We opened two banners, and immediately the police come, 6 police headed by a woman officer, and told us to leave, because we violate the hugienic measures and public meetings are not allowed. In vain went our arguments about the international day, the police head said she knew, she agreed with our demands, but the law does not allow public meetings. She called on the phone a superior officer in order to inform about our refusal to close the banners, or to legalize her act, we demanded to speak to this superior officer but she didn’t let us. Thus, it was obvious that the command come from higher in the hierarchy of the police. 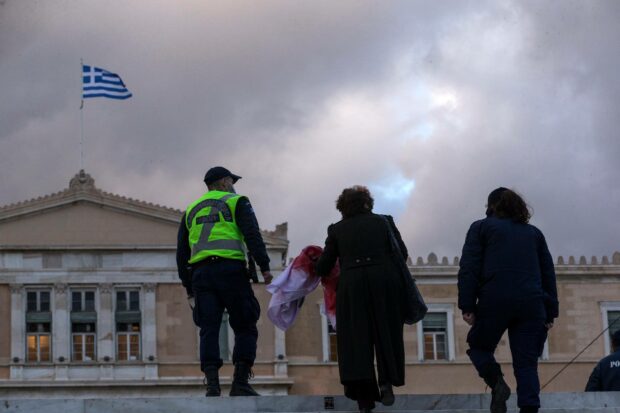 She asked us for identity cards. The undersigned refused to give, because this is an act for intimidation in face of a public protest. She also asked to see the SMS (necessary statements to move for a specific reason in the lockdown) and the reply was that I do have an SMS for moving, but I don’t show it for the same above reason. At once she ordered my arrest and I was driven to the police car about 4.25. At the top of the square, there were riot police moving, armed with everything, as usually. The other two members did give their identities, one was not asked at all.

The officer in charge ordered them to leave, our three friends said they wanted to spread the banners on the grass, but even this was not allowed. Also they banned the circulation of our leaflet.

In half an hour, about 5 o’clock, women were coming in response to the call of the Assembly 8th March, for the protest at 5, they started opening the banners, and immediately they were encircled by police, they were told they will be arrested and called to enter a small van that had arrived. They said they refuse to congest, and as a result they put them by 3, in cars. In total, 8 more women were arrested on the spot.

A bit further, in front of the Public bookshop out of the square, there were a few more persons, who saw the arrests at a distance of 100 metres, and they didn’t approach. But the police approached them and arrested them all the same. They were distributing trackts. What a crime!

All this enterprise for the repression of a small protest for violence against women was absolutely illegal and terroristic.

They asked where were the SMS messages we had sent, but all those that were presented, were characterized as illegal. Is there a provision for going to public activities? NO. The six numbers which we can use to move in the public space do not foresee it.

Are public events allowed? During the days for the commemoration of the Polytechnion revolt of 1973, the 17th of November, they had announced that public events are allowed for up to four persons. We were four in the beginning, when we opened the first banners, as is shown in the photo, they told us to disperse, with the threat of arrest in case of rejection (which they did). Therefore in practice even four persons cannot make a public protest.

Indeed, the minister for the Protection of the Citizen, mr. Chrysochoides, in an interview on the 17th of Nov. In the TV channel SKAI (that is a few days earlier) said public meetings are not allowed but political meetings are allowed, for the respect of the Commemoration. Thus they allowed political meetings to parties, of 50 and 200 persons in the building which was a torture place of EAT-ESA for laying wreaths, but the women’s organisations have no right even for four persons, much more if they were a few dozens. He also said that on such occasions we do not give a fine.

The charges and the fines must be annulled

The whole enterprise of the arrests of the women was one more demonstration of authoritarianism on the part of the government, and even more so a demonstration of misogynism, since it was made obvious that the women may be oppressed, but they should not protest.

We ask all the women’s organisations who were not present in the public activities, to condemn the authoritarianism of the government and to support our demands for the dropping the charges and the fines.

NOT MORE DISCRIMINATION AGAINST THE WOMEN

We demand that the international organisations like the European Women’s Lobby and the Committee Grevio for the monitoring of the application of the Instanbul Convention, which is ratified by Greece, to condemn the misogynist acts of the Greek Police and of the Greek government. We demand the annullment of the charges, cancelling of the fines and to let the women’s organisations continue with their activities without obstacles. We also ask of the European feminist organisations to send messages of solidarity to the mail below.

Finally, we demand from the General Secretary of Family Policies and Gender Equality to condemn the extreme authoritatian acts of its government.

We underline that in all countries of Europe and further, with the same Covid, there were demonstrations and events of women for the 25 of November, but there was not police repression. The Greek govermnent this year wanted to steal the “glory” of Erdogan, who in the last few years sends his police forces for the violent dissolution of relevant public demonstations.

Two days after the arrests, the minister mr. Chrysochoidis made an apology by saying that this was inappropriate, and asks to be forgiven by the “ladies arrested”. He didn’t mention anything about dropping the charges and the fines. Much more, he reminds us of the husband who has killed his wife and says he is sorry, he didn’t want it, it was the bad moment and wants to be forgiven.

Amnesty International produced a statement, on the arrests and the repression: