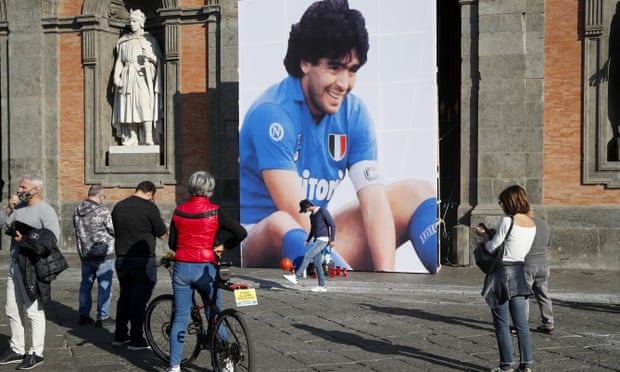 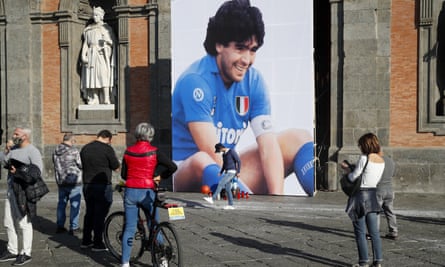 Imagine a man hitting his partner. The picture that comes to mind probably involves a scruffy individual, his hand raised and his face contorted with fury. We can all condemn that, can’t we? But what if the angry face is familiar, seen thousands of times in a very different context? If it belongs, say, to the world’s most famous and admired footballer, Diego Maradona?

Judging by the outpouring of grief that followed his death, at the age of 60, it seems too big an ask to admit that our heroes, especially our sporting heroes, have been credibly accused of domestic violence. Maradona’s face just doesn’t fit in that unpleasant picture – unless you’ve seen the video.

First aired on an Argentine TV channel six years ago, it appears to show Maradona hitting his then girlfriend, a former professional football player called Rocio Oliva, who was three decades his junior. Unsteady on his feet, Maradona shouts at her and then appears to strike her twice. The slaps are clearly audible on the soundtrack, as is Oliva shouting at him in Spanish: “Stop, stop.”

Maradona didn’t challenge the video’s authenticity, but he did deny hitting Oliva. “I grabbed the phone but I swear to God that I have never hit a woman,” he insisted. It wasn’t the first time Oliva accused Maradona of abusing her, although charges were never brought. Another incident occurred on a plane, in front of dozens of witnesses, when Maradona verbally abused Oliva before grabbing her by the neck. The couple split and got back together several times before Oliva left Maradona for good two years ago.

Maradona’s death on Wednesday happened to coincide with the international day for the elimination of violence against women. On the same day, official statistics revealed that a fifth of offences recorded by police in England and Wales during and immediately after the first national lockdown – amounting to more than a quarter of a million in three months – involved domestic abuse. These statistics might have given Maradona’s obituarists pause for thought, but they didn’t.

Domestic abuse is routinely overlooked or rendered invisible, especially if the alleged perpetrator is an elite sportsman or famous actor. When the Olympic athlete Oscar Pistorius shot dead his girlfriend, Reeva Steenkamp, commentators initially bought his story that he believed she was an intruder. It was only much later, and after protracted legal proceedings, that Pistorius was found guilty of murder.

Relationships in which women are abused are often described as volatile, depersonalising blame. But Maradona’s jealous outbursts – he once threw Oliva out of his home in Dubai after wrongly accusing her of flirting with the Manchester United goalkeeper, David de Gea – will be horribly familiar to any woman who has experienced coercive control.

Last month glowing tributes were paid to the Scottish actor Sean Connery – recipient of a knighthood, among other honours – who had died at the age of 90. Like Maradona’s, his biography had an irresistible rags-to-riches element, with lots of references to the fact that he left school at 14 and did manual labour before becoming a hugely successful actor. “Our nation is today mourning one of our best-loved sons,” said Scotland’s first minister, Nicola Sturgeon.

Predictably, most of the accounts of his life glossed over allegations that Connery was violent towards his first wife, the Australian actress Diane Cilento, leaving her bruised and battered. In her autobiography, published in 2006, Cilento described locking herself in a bathroom for protection after Connery hit her in the face, knocking her to the floor, and a second blow “sent me flying”.

It’s not even as if he was a repentant abuser. “I don’t think there is anything particularly wrong about hitting a woman – although I don’t recommend doing it in the same way that you’d hit a man,” he said in an interview with Playboy in 1965. “An open-handed slap is justified, if all other alternatives fail and there has been plenty of warning.” He confirmed his views in an interview with Barbara Walters in 1987, not condemning domestic violence until 2006.

It is not as though these men are exceptions. There are a great many of them, and they aren’t defined by class, wealth or education. Abusers can be talented and attractive, something that fans of the actor Johnny Depp evidently struggled to believe when the judge in his libel action accepted most of the allegations made by his former wife, Amber Heard.

It may be painful for fans of elite sports stars and Oscar-winning actors to admit that their heroes have abused women. But domestic violence is an epidemic, and it won’t stop while it’s being airbrushed from fan sites and obituaries. We all have a responsibility in these matters – and it can’t be shrugged off because of someone’s talent.

• Joan Smith is a journalist and chair of the mayor of London’s violence against women and girls board.