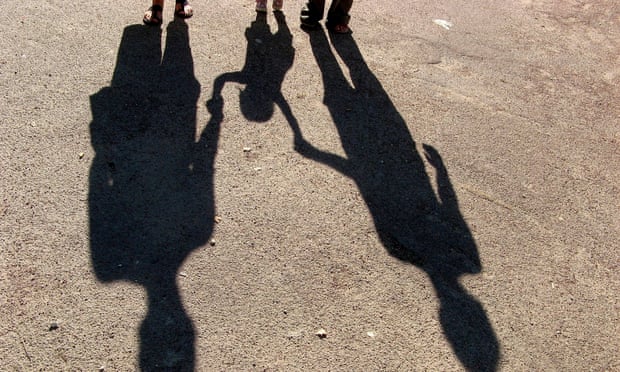 Evidence shows that the disproportionately male judiciary is more likely to rule against abused women and children
If you’ve binged on the BBC drama The Split, which follows a family of glamorous divorce lawyers, you might be forgiven for thinking that this corner of the law is all about multimillion-pound footballer pre-nups and the fallout from ministerial affairs. But the reality of family courts couldn’t be more different. By far the most fraught issue that crops up is not money, but contact with children. The family courts are equipped with some of the most intrusive powers the state has: not just the power to remove children, but the power to determine how much separated parents get to see them. Most of these judgments are never published, meaning the scrutiny into how those powers get used is utterly inadequate.
Two in five marriages end in divorce, and there are more than 40,000 cases a year that come before the courts that relate to custody and contact with children, a majority including allegations of domestic abuse. These can be life-and-death decisions – at least 50 children have been killed as a result of contact with abusive parents after separation in the last 25 years. Yet judges need to be confident that if they are going to severely restrict a parent’s contact with their child, that parent must probably pose a risk to the child’s welfare.

these decisions are made has allowed a dangerous narrative to prevail: that the system is biased against fathers. Next year is the 20th anniversary of the formation of Fathers 4 Justice, a guerilla campaign perhaps best remembered for flourbombing Tony Blair at Prime Minister’s Questions. It has become progressively nastier since then – including a “crummy mummy” campaign singling out famous women for criticism.

Fathers 4 Justice demand the law enshrines a presumption of 50-50 contact. Their claims of court bias against men have gained broad traction in the debate around the subject, despite evidence to the contrary: a review of published court decisions found that they promote as much contact as possible with fathers, even in cases of proven domestic violence. A 2011 review of family law drew on evidence from Australia, where a legal presumption of shared parenting has been associated with poorer emotional outcomes for children. It concluded that there should be no legal change that “might risk creating a parental ‘right’ to any particular amount of time with a child” as it would undermine the principle that a child’s welfare is paramount. This did not stop the government introducing a garbled reform in 2014 that told courts to presume that, unless shown to the contrary, a parent’s involvement in their child’s life will always be to the child’s benefit.

But there is growing evidence to suggest women who have suffered domestic abuse and are worried for their children’s safety face an uphill battle to be taken seriously. Some judges have no understanding of domestic abuse – as highlighted in an excoriating high court ruling that overturned a finding by a senior male judge that it wasn’t rape “because she didn’t fight back”. That hasn’t stopped the judge involved continuing to preside over family court cases involving domestic abuse allegations and making a similar ruling in another case.

It’s also a well-known truth amongst lawyers and domestic abuse charities that there are judges on the circuit who take against women alleging domestic abuse, and I’ve heard horror stories from domestic abuse survivors about their treatment at the hands of judges: think being called “the girl who cried wolf” as the judge ignores evidence to the contrary.

There is evidence that the system is too quick to assume domestic abuse affects only mothers, not children; and that women and children are safe once a relationship is over. Women can find themselves in a catch-22, told by social services they must leave their abuser or risk their children being taken into care, but then disbelieved by a judge when that abuser applies for contact.

Two things have made the situation worse. Cuts to legal aid means many mothers and fathers end up representing themselves, which means women can find themselves in the awful position of being cross-examined in front of a hostile judge by their abuser. Recently introduced provisions to try to protect women who say they have been abused – such as the use of screens in court – are used only patchily.

And in recent years, the junk science of “parental alienation syndrome” has gained traction. This idea was developed in the 1980s by Richard Gardner, a crank psychiatrist who thought child sexual abuse is not necessarily traumatic, and that mothers who don’t fulfil their partners sexually are to blame for fathers sexually abusing their daughters. Gardner believed that many mothers who claim they have been abused are liars, poisoning their children against their partners, and called it “parental alienation syndrome”, asserting that it was even more damaging to children than sexual abuse.

Despite not being subject to empirical testing, Gardner’s beliefs have somehow become influential in family courts around the world. Here, parental alienation is often used as a counter allegation against mothers by fathers accused of abuse. The “symptoms” have much in common with those of children traumatised from witnessing or experiencing abuse by their father. There is evidence of an increasing willingness in recent case law to transfer the residency of children from “alienating” mothers to their fathers. As a result, women have to think carefully about bringing abuse allegations to court – even where they may be evidence – in case they get accused of making false claims and lose custody as a result.

A review of how parental alienation gets used found it dominated proceedings to the exclusion of all else, including allegations of domestic abuse, and that although it is purportedly gender neutral it was only men who got any traction with it. It’s hard to imagine a more effective route for abusive men to silence the voices of women and children. A woman accused of parental alienation told me that one judge said in court “for all I know the mother may be a manipulative cow who is emotionally abusing her children”, despite her former partner having served jail time for sex abuse of young children in his family, and social services telling her she had to get the family courts to formally restrict his access to their children.

Family court judges have to grapple with unenviable decisions, with legal aid cuts making it harder to accurately assess risks to children. But putting these decisions in the hands of an unaccountable and disproportionately male judiciary, untrained in domestic abuse, some of whom seem to have no problem slipping their social biases into the courtroom, is bound to cause problems. Given the capacity for errors in human judgment, of course there may be fathers who have heartbreakingly had access to their children unjustly restricted. But the balance of evidence points to a system that is biased against abused women and children, not innocent, falsely accused men.

• Sonia Sodha is a Guardian and Observer columnist