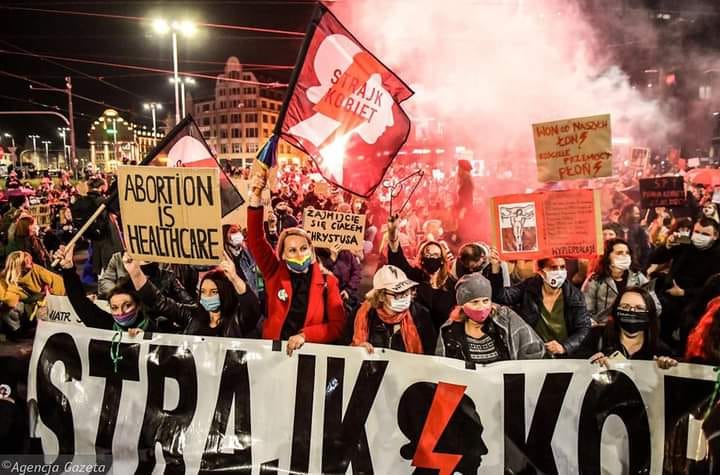 Today, 30 January 3 days after the ruling of the Constitutional Court came into force that enforces the near total ban of abortion in Poland, we want to again express our solidarity with all the women, men and gender non-conforming persons, young, old, migrants, non-migrants, queer, lesbian, gay, and all others that have come to public spaces to stand up for reproductive and the human rights of women* and for democracy.

The women’s strike in Poland is a manifestation of immense power and determination, which we share. As feminists in different localities across Europe, including Belarus, we call on all people in Europe to keep expressing their solidarity in any way they can. The struggle in Poland and other countries is one demanding a long breath, but when we keep demanding for change together we will achieve the protection of women’s human rights.

We want to condemn not only the almost complete ban on abortion. We also strongly oppose the lack of respect for democratic rule by the ruling party PiS.  It has used its tactic of a continuous erosion of the rule of law by appointing their favoured judges into the Constitutional Court because earlier democratic attempts to discuss it in Parliament were not successful. On top if that they are instrumentalizing the pandemic and promote a violent and oppressive response by police and special forces that is intimidating protesters and leaders of the movement.

In recent days peaceful protestors, including one of the leaders of the women’s strike Klementyna Suchanow, were arrested and brought to police stations outside the centre of Warsaw, which seems part of an ongoing and intensified tactic of intimidation.

We resist these attacks on our common rights to our bodies and to our political voice, #StrajkKobiet.

The WIDE+ Feminist network, bringing together many feminists activists, scholars, women’s rights and development organisations in Europe in partnerships with feminists elsewhere, stand in solidarity with women’s rights protesters in Poland.