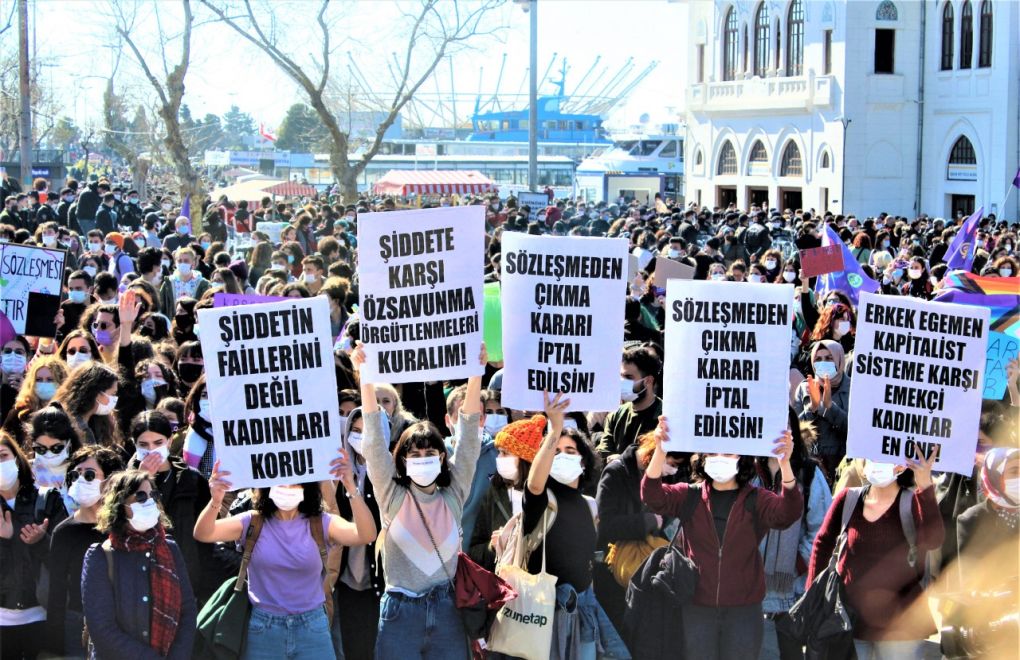 On April 11th, EAST members, women and LGBTQIA+ people from Turkey, Poland, Greece, Italy, Bulgaria, Romania, […], drawing from Turkey’s withdrawal from the Istanbul Convention, gathered together in a public assembly. This assembly was called to organise transnationally in our fight for women’s and LGBTQIA+ people’s freedom.

Erdogan’s overnight withdrawal from the Istanbul Convention sends a clear message to all women: male violence against women must be accepted as the tenet of the family and its order. E.A.S.T. stands together with the women fighting in Turkey, and calls on all women, essential workers, migrants and LGBTQIA+ people to organise together a transnational response to the patriarchal backlash we are experiencing in every corner of Europe and beyond. The ratification of the Istanbul Convention does not mean that its principles are applied, nor that such a document that offers no sanctions for non-implementation would be a solution for patriarchal violence. However, we know that a document like this comes after long-standing transnational feminist struggles, and its withdrawal is a direct attack against us all.

Erdogan’s attack on women’s freedom is not an isolated event. It did not start with the Istanbul Convention, it  continues other attacks on hard-won rights of women and it already has a critical impact on women’s lives: injunctions are harder to get and restraining orders are granted for shorter periods. Patriarchal violence intensifies as we speak. This attack comes amidst an organised barrage of policies and actions against women and LGBTQIA+ people by conservative political figures and governments throughout and beyond Europe. In Poland, the government has recently approved a law that further limits the possibility to get a legal abortion and women responded with an extraordinary mobilisation that had a transnational resonance. On March 30th, the Polish Parliament passed a bill called ‘Yes to family, no to gender’ to design an alternative convention that would lead to withdrawal from the Istanbul Convention. In the whole of Eastern and Central Europe, the Convention has been under attack since late 2017 and has not been ratified in countries like Bulgaria, Slovakia, Hungary, impinging on long-term struggles by women’s organisations against domestic and gender-based violence. This goes hand in hand with policies implemented in Greece, Italy,  Hungary, Czech Republic and in several other countries, that are designed to put the idea of the traditional family before women’s freedom. In many places, shelter homes for women fleeing domestic violence are defunded, and it is getting harder to get a divorce or to obtain custody in cases of abusive relationships. In many places, to get a free and legal abortion is almost impossible.

This coordinated attack that is taking place across Europe and beyond is happening in the midst of a global pandemic. For many women, the lockdown has meant living in a deadly cage. The pandemic has been used by governments as an opportunity to put women back in their “traditional” place: at home, taking care of  the family. This is all the more unbearable since we have been the ones doing the most essential jobs, in healthcare, sanitation, domestic labour, keeping society afloat. Capitalist societies need our poorly-paid labour in these sectors as well as our free labour at home. These attacks are clearly against our attempts to escape what is considered our “natural” obligation. Besides, those of us not doing essential jobs have been massively fired, something which reinforced our economic dependency from our partners, precarity and isolation.

We reject the colonialist rhetoric of a cultural clash between a progressive and liberal West and a backward and uncivilized East. Our shared albeit diverse experiences of oppression have demonstrated that we are constantly attacked by structural mechanisms that are put in place to protect capital accumulation processes everywhere. In this context, the EU is ready to turn a blind eye to this attack on women if Erdogan’s regime keeps refugees outside EU borders. The withdrawal from the Istanbul Convention will deny women escaping male violence the possibility of getting  asylum, and in the refugee and detention camps at the borders of Europe, from Libya to Morocco, from Turkey to the Balkan Route, male and state violence is daily perpetrated against migrant women. When they cross Europe’s borders, the link between the residence permit and family status or labour contract ties women to their partners or family members – even when these are violent! – and pushes them to accept unbearable work and wage conditions.

We know that the welfare systems of many countries in Western Europe would collapse without the cheap domestic labour of hundreds of thousands of migrant women, especially those coming from Central and Eastern Europe. These women are accused by their governments of disrupting their families. At the same time, they won’t find better conditions in the destination countries, where they are exploited, harassed and exposed to institutional racism. We are not buying the lie of the EU acting as a defender of women and LGBTQIA+ people’s rights because its governments allow for us to be killed  and raped every day, that we are exploited, overworked and discriminated against.

We denounce all attacks on LGBTQIA+ people and the so-called ‘gender ideology’, the criminalisation of which  is meant to defend and strengthen the  ‘traditional family’ as the inescapable destiny for everyone, while women, especially migrant ones, as well as LGBTQIA+ people have been practically subverting it. The family must be violently reasserted not only as a symbolic institution but also as a shock absorber of poverty in the face of the dismantling of welfare systems. In these circumstances, reinforcing gender roles means preserving the hierarchy between men and women: legitimising male violence through the abrogation of the Istanbul Convention means giving men and patriarchal institutions authority to punish women who do not comply with their supposedly ‘natural’ role as mothers, wives or daughters.

We say it out loud that the struggle against the subordination of women in the family and the struggle of LGBTQIA+ people for sexual freedom and against criminalisation is a common struggle and has a common goal: the subversion of the neoliberal reproduction of patriarchal society!

We are not afraid because we already fight against violence every day. It is clearer than ever that this fight requires today a stronger transnational organisation, from East to West, from North to South . To our sworn enemies we say: run, run, run, the women are coming after you…

To join forces and organise a transnational mobilisation before the summer, we will meet again on May 23rd (for further info follow us on facebook: https://www.facebook.com/EASTEssentialStruggles)

For collectives and organizations to sign the statement please write to essentialstruggles@gmail.com