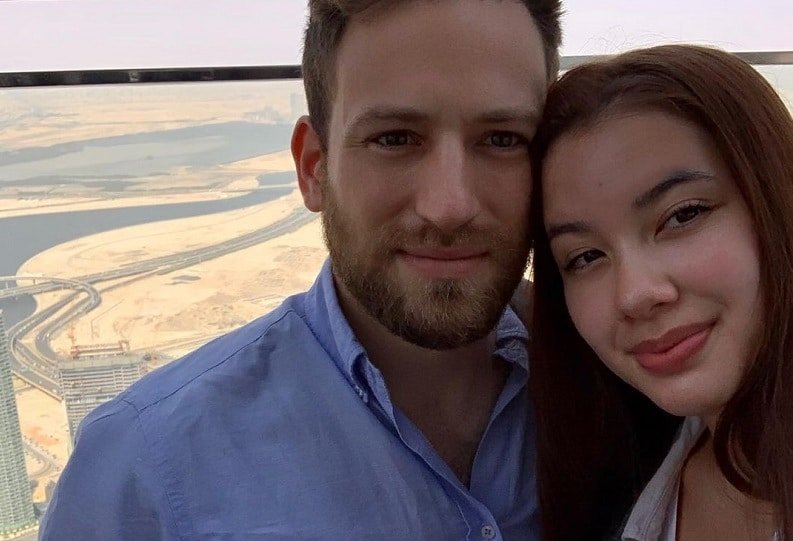 The Greek husband of murdered Briton Caroline Crouch has confessed to killing her in front of their baby when she threatened to walk out on him – before inventing the story of a gruesome robbery to cover his tracks.

Babis Anagnostopoulos had initially told police that burglars broke into the family home near Athens in the early hours of May 11, tied up him and his wife, threatened their infant daughter with a gun, strangled Caroline to death, then fled with £10,000 in cash in a case which shocked Greece.

But now police say Babis has confessed to stuffing cloth into Caroline’s mouth and then smothering her to death during a row in which she had threatened to leave him along with their child, before spending the pre-dawn hours staging the robbery.

As part of his cover-up, detectives say the 33-year-old helicopter pilot drowned the family dog and hanged its body from an a stair banister – something he would later blame on the ‘raiders’.

But his story fell apart when a fitness tracker on Caroline’s wrist showed her heart had stopped beating hours before the alleged break-in took place.

More tracking data from Babis’s phone also showed him moving from the attic to the basement of the house and back again, despite claiming to have spent all night tied to the bed.

And data from a security camera at the home showed its memory card had been removed at 1.20am – again, hours before Babis claimed the break-in happened.

Police said Babis broke down and confessed when confronted with the evidence during an eight-hour questioning session that ended with a statement of his guilt issued by officers at 9.36pm local time yesterday.

He told police in his statement: ‘That night we were fighting early. At one point she threw the child in the crib and told me to leave the house.

‘She pushed me and punched me. I lost my temper, I suffocated her with the pillow. Τhen I made up the robbery.’

Babis is now being held in custody in Athens and is expected to be hauled before a magistrate today when he will be formally charged with murder.

‘When faced with the evidence he confessed,’ said Apostolos Skrekas, a police spokesman.

‘The tracker contradicted his initial testimony that he had been roped up and gagged by three assailants. Instead, what we found was that he moved around the house, going from the attic to the basement.’

Greek police said in a statement: ‘Investigation of the homicide of a 20-year-old native (or resident) that took place on May 11, 2021 in Glyka Nera.

‘The perpetrator is her 33-year-old husband, who confessed to his act.’

The confession comes five weeks after Babis led mourners at Ms Crouch’s funeral and read a eulogy while standing over her grave.

‘Our loved ones are the most important people to us all,’ he said at the time – wiping away tears while holding their baby daughter in his arms.

‘You should always look after your loved ones and enjoy your time together.’

On social media, the young couple appeared to enjoy a blessed life – 20-year-old Caroline posting family snaps of the couple with their daughter, or else showing off their idyllic-seeming life in Greece as she wandered on sunny beaches in bikinis.

The pair had met while Babis was on holiday to the Greek island of Alonissos where Caroline, who was born in the UK, had lived with her parents since the age of eight.

They were married in 2018, and she gave birth to their first child – a daughter – in June last year.

But friend said last night that the idyllic images were merely a mirage – in fact, Babis was a jealous and controlling husband and Caroline was deeply unhappy. 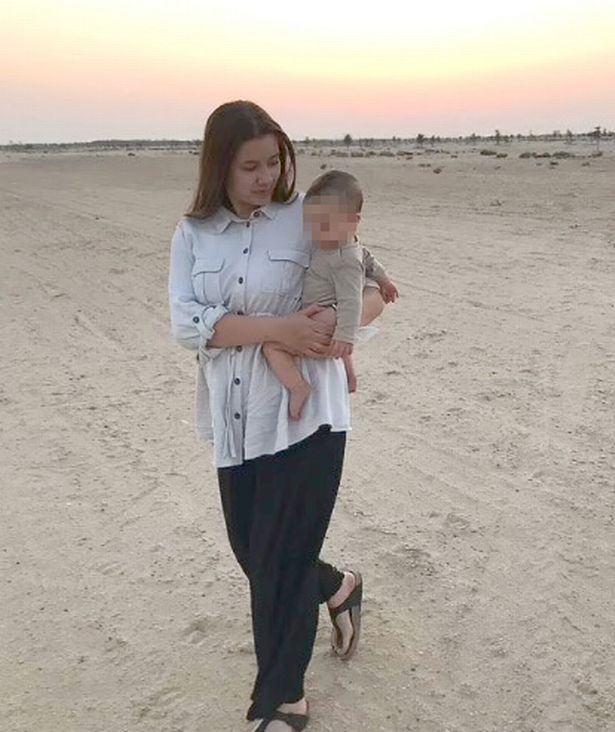 ‘She could not have the time she wanted with her friends and she was constantly expressing her complaints about his behavior,’ a source told Greek news site Ethnos.

Police had also revealed during their investigations that both Babis and Caroline had been in therapy at the time of the killing, speaking to the same psychologist but during separate sessions.

At the time, it was reported that Caroline was suffering from post-natal depression. Officers did not say what Babis was being treated for.

Texts found by police on the coupe’s phones backed up suspicions of a less-than happy marriage, according to police, with messages exchanged in English showing one had called the other ‘stupid.’

On the night of the murder, Caroline had allegedly messaged a friend saying that she was leaving Babis.

Phone data also showed that Caroline had attempted to book herself into a hotel on the night she died, detectives said.

Police also revealed on Thursday that officers had ‘immediately’ suspected Babis of committing the murder, after noticing his ‘cold’ demeanor when they arrived at the crime scene on the morning of May 11.

One officer even told how he took Babis’s daughter away from him and handed the girl to her grandmother out of fear that he might harm the girl, Protothema reports.

But detectives agreed to pursue the burglary theory while keeping their suspicions about Babis under wraps to avoid ‘spooking’ him into fleeing.

That included allowing him to attend a memorial service for Caroline on the island of Alonissos with Caroline’s family on Wednesday.

But, following the service, officers arrived and asked Babis to come with them to answer some more questions after a ‘breakthrough’ in the probe – telling him that the evidence was so urgent that it ‘could not wait’

A boat was used to take Babis to the neighbouring island of Skiathos where a police helicopter whisked him to Athens, and the eight-hour interrogation session began.

His confession ends a month-long investigation into what authorities billed ‘a near-perfect murder’ for the lack of evidence the killer left behind.

Anagnostopoulos, who trained as a helicopter pilot in Liverpool, had married Miss Crouch in May 2018 after they met while he was on holiday to Alonissos.

Miss Crouch, a student at the University of Piraeus, had a British passport. She moved to Alonissos with her mother Susan Dela Cuesta and father David Crouch, 78, when she was eight.

Three days after her death, every shop, bar and restaurant on the island of Alonissos closed as its 2,000 residents laid to rest the British woman they had adopted as their own in a hilltop cemetery overlooking the Aegean.

Earlier, her killer had brazenly addressed the mourners from the altar of the island’s Greek orthodox church.

‘One thing that makes me even more sad than her death is the fact that our daughter will grow up without remembering her beautiful mother, who was the joy of life, though our daughter will always be with me and with all of us.’

Anagnostopoulos spent 37 days expertly playing the part of the grieving widower, providing the police with a detailed account of the robbery and even descriptions of the intruders.

He claimed that three men had broken into the house through a downstairs window, disabling security cameras before strangling the family dog on their way upstairs to the couple’s bedroom where they found them asleep.

Babis claimed he was blindfolded and gagged, then tied to a bedpost with his back towards Caroline, who was also restrained.

He said the men had somehow known the couple were keeping £10,000 in cash at the house, hidden inside a Monopoly box, which they had planned to use for building works on a new plot of land they had bought.

Babis said he quickly gave up the location of the money to avoid an altercation, but the men were not satisfied and began demanding more valuables.

Through a gap in his blindfold he claimed to have seen the men – who he said spoke Greek to him but a foreign language among themselves – point a gun at his baby daughter’s head while making their threats.

That had caused Caroline to scream, he said, after which the burglars bundled her to the bed and suffocated her before fleeing the property and leaving him tied up.

He claimed to have spent hours in that position, before managing to free himself just enough to crawl to a phone and dial a neighbour’s number with his nose.

The neighbour then summoned police, who arrived to find the grisly scene.

Police had initially pursued the burglary narrative, and even arrested a suspect – a Georgian with a history of violent burglaries who tried to leave the country on a fake passport – but failed to link him to the crime.

DNA evidence collected from underneath Caroline’s fingernails as she fought her attacker has also proved to be inconclusive.

Babis shared a tribute to his wife Caroline Crouch last month after her death. Under the photo taken on their wedding day he writes: ‘Together forever. Have a nice trip my love’

But the investigation now appears to have been a ruse, concocted so that Babis would remain calm and stay in Greece while they pursued him as the real suspect.

During that time, Babis had given several interviews to the media while allegedly playing the grieving husband – telling reporters ‘imagine how I feel’ when questioned about the tragedy.

He was also frequently pictured with Caroline’s parents, even hugging her mother at the funeral which took place last month.

Babis had also sat down for two lengthy interview session with police, sticking to his story about the break-in both times.

Suspicions around him only crept into public view a few weeks ago, when it emerged the police had interviewed the couple’s therapist.

At the time, detectives said they had uncovered ‘vital evidence’ about Babis and Caroline’s relationship that they believed would help solve the case.

Babis is expected to be formally charged with murder on Friday. It is unclear whether he will enter a plea at the same time. 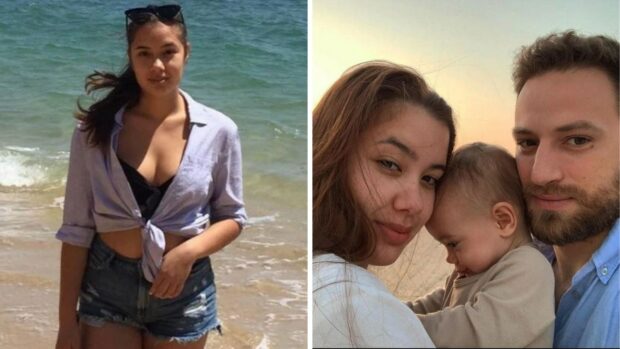