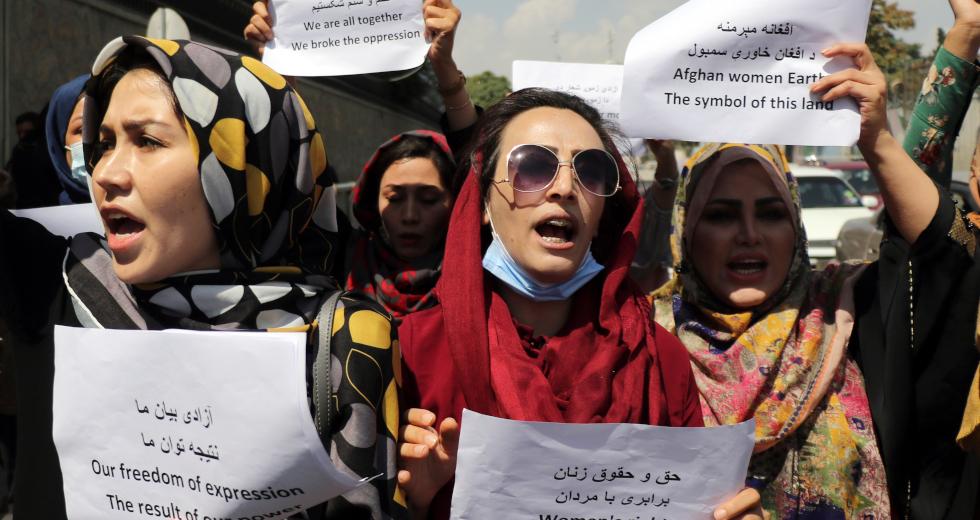 We, independent Iranian women’s organizations declare our solidarity with women of Afghanistan in their struggle against Taliban’s resurgence and their taking control of Afghanistan. We deeply share the pain and suffering that is imposed on them. Women of Afghanistan and Iran have a shared experience in confronting political Islam, and suffer from the medieval oppression imposed by misogynistic and retrograde governments.

We are determined to be with them at this difficult time, and to raise our voice with them against the reactionary fundamentalists and misogynists. We strongly condemn any kind of abuse and violation of human and women’s rights in the name of the law, religion, and tradition.

We condemn the recognition of Taliban (the Islamic Emirate of Afghanistan) by any country on the pretext that they have “changed” or have become “moderate” and stand by them. Taliban by recapturing political power and exertion of their rule over Afghanistan have forced the young girls and women of Afghanistan into the sex slave of their foot soldiers in the name of “jihad marriage”

We in unison with the women of Afghanistan emphatically state that to be ruled by Taliban, neither today nor before, has ever been the choice of Afghani people, especially women. We respect the right of Afghani people, in particular Afghani women, in deciding where to live and support the provision of help for them to enter and seek safe haven in other countries.

Political asylum is the right of every woman who is escaping Taliban’s reign of terror and their medieval misogynistic rule. The unconditional recognition of their right of asylum, and transfer to safe countries which is approved by the UNHCR is one of the basic rights and should be extended to them.

The struggle of Afghani women against the reactionary political Islam and Taliban has a long history. Although in the period 1996 and 2001 they suffered extreme gender-based brutality and were denied of their human and individual rights such as right of being outdoors without male guardians, education, employment, and social activities, they courageously showed that they were able to stand up to Taliban and the patriarchal and medieval government of Afghanistan. They are now stronger and will not allow themselves and their children once more to become victims of the misogynistic and inhuman policies of Taliban.

We, the undersigned independent Iranian women’s organizations, while protesting against the tragedies that have befallen and been imposed on women and people of Afghanistan, are expressing our solidarity with them against political Islam. We call for immediate actions by the international community in addressing the basic needs of people of Afghanistan and ask for the support of progressive movements, feminists, and human right organizations for the realization of this demand.

· The Organization for Emancipation of Women

· Women of Iran for sustainable Equality