By the signers below, Nuclear Wakeup Call, February 16, 2022

We are women from the United States and Russia who are deeply concerned about the risk of possible war between our two countries, who together possess over 90% of the world’s nuclear weapons.

We are mothers, daughters, grandmothers, and we are sisters, one to another.

Today we stand with our sisters in Ukraine, East and West, whose families and country have been torn apart, have already suffered more than 14,000 deaths.

We stand together and we call for peace and diplomacy, with respect for all. 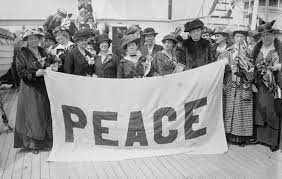 We are united in the belief that diplomacy, dialogue, engagement and exchange are urgently needed to end the current crisis and avert a catastrophic military conflict that could spiral out of control — even push the world to the precipice of nuclear war.

For the U.S. and Russia, the only sane and humane course of action now is a principled commitment to clear, creative and persistent diplomacy— not military action.

At this perilous juncture, rather than allocate blame, we should be seeking 21st century alternatives to senseless military conflicts and wasteful spending on war. It is a time to redefine security so that women, families, and our children, can live in peace.

At a time when we find ourselves in perhaps the most dangerous moment since the Cuban Missile Crisis, we call on the media in both our countries to stop fueling the flames of war. We call on the media to fulfill their ethical responsibility as journalists to remind us of the price of war, the bloodshed and loss of human lives, to demand evidence when claims are made that can escalate tensions, and to have the courage to sound the alarm on the risk of escalation to a nuclear war that would mean the end of life as we know it.

At a time when poverty is increasing in the U.S., Ukraine and Russia, when the world collectively faces the existential threat of climate change, a pandemic that has taken 5.8 million lives and caused rising “deaths of despair,” declining life expectancy and extreme inequality, isn’t it time to think anew?

How might we seize the day and lay out a 21st century vision — that not only advances peace and security, but can unite the world — essentially a new realism? What could creative, humane diplomacy look like? If done thoughtfully, it could do more than resolve the standoff in Ukraine — it could pave the way for broader cooperation between the U.S., Russia, and Europe and beyond on climate, disarmament and more. It could lay the seeds for a new, demilitarized and shared security architecture.

We independent women, seekers of peace and security, understand the vital importance of engaging minds and hearts. We call on you to share this call for peace and urge our governments to keep talking, to pursue clear, creative and persistent diplomacy.

These are times of fear but also of hope and possibility. The world is in motion, the future is not written. As Americans and Russians, we have a compelling stake in deescalating tensions between our countries. The approach we suggest surely is more realistic, more wise, than preparing for a military conflict that could lead to unthinkable nuclear war.

We stand together and we call for peace. Stand with us. #WomenCall4PeaceUkraine

Sandra Cline, Trustee Emerita for Biosphere Foundation, Founder and Editor of Dance of the Spirit, Writer and Novelist

NuclearWakeUpCall.Earth, Board Member, American Committee for US-Russia Accord

Marina Pislakova-Parker, Ph.D Sociology, Founder and Chair of the Board, ANNA – Center for the Prevention of Violence, Author, Researcher

Ann Wright, Colonel, US Army and Former US Diplomat, Veterans For Peace Advisory Board Member

Natalia Zhurina, Research and Education Officer, Agency for the Prohibition of Nuclear Weapons in Latin America and the Caribbean