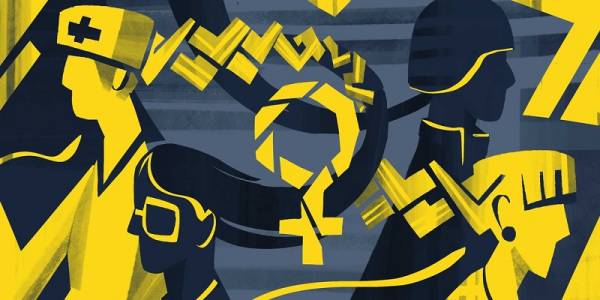 We, feminists from Ukraine, call on feminists around the world to stand in solidarity with the resistance movement of the Ukrainian people against the predatory, imperialist war unleashed by the Russian Federation. War narratives often portray women* as victims. However, in reality, women* also play a key role in resistance movements, both at the frontline and on the home front: from Algeria to Vietnam, from Syria to Palestine, from Kurdistan to Ukraine.

The authors of the Feminist Resistance Against War manifesto deny Ukrainian women* this right to resistance, which constitutes a basic act of self-defense of the oppressed. In contrast, we view feminist solidarity as a political practice which must listen to the voices of those directly affected by imperialist aggression. Feminist solidarity must defend women’s* right to independently determine their needs, political goals, and strategies for achieving them. Ukrainian feminists were struggling against systemic discrimination, patriarchy, racism, and capitalist exploitation long before the present moment. We conducted and will continue to conduct this struggle both during war and in peacetime. However, the Russian invasion is forcing us to focus on the general defense effort of Ukrainian society: the fight for survival, for basic rights and freedoms, for political self-determination. We call for an informed assessment of a specific situation instead of abstract geopolitical analysis which ignores the historical, social and political context. Abstract pacifism which condemns all sides taking part in the war leads to irresponsible solutions in practice. We insist on the essential difference between violence as a means of oppression and as a legitimate means of self-defense.

The Russian aggression undermines the achievements of Ukrainian feminists in the struggle against political and social oppression. In the occupied territories, the Russian army uses mass rape and other forms of gender-based violence as a military strategy. The establishment of the Russian regime in these territories poses the threat of criminalizing LGBTIQ+ people and decriminalizing domestic violence. Throughout Ukraine, the problem of domestic violence is becoming more acute. Vast destruction of civilian infrastructure, threats to the environmental, inflation, shortages, and population displacement endanger social reproduction. The war intensifies gendered division of labor, further shifting the work of social reproduction – in especially difficult and precarious conditions – onto women. Rising unemployment and the neoliberal government’s attack on labor rights continue to exacerbate social problems. Fleeing from the war, many women* are forced to leave the country, and find themselves in a vulnerable position due to barriers to housing, social infrastructure, stable income, and medical services (including contraception and abortion). They are also at risk of getting trapped into sex trafficking.

We call on feminists from around the world to support our struggle. We demand:

– a just peace, based on the self-determination of the Ukrainian people, both in the territories controlled by Ukraine and its temporarily occupied territories, in which the interests of workers, women, LGBTIQ+ people, ethnic minorities and other oppressed and discriminated groups will be taken into account;

– international justice for war crimes and crimes against humanity during the imperialist wars of the Russian Federation and other countries;

– effective security guarantees for Ukraine and effective mechanisms to prevent further wars, aggression, escalation of conflicts in the region and in the world;

– freedom of movement, protection and social security for all refugees and internally displaced persons irrespective of origin;

– protection and expansion of labor rights, opposition to exploitation and super exploitation, and democratization of industrial relations;

– prioritization of the sphere of social reproduction (kindergartens, schools, medical institutions, social support, etc.) in the reconstruction of Ukraine after the war;

– cancellation of Ukraine’s foreign debt (and that of other countries of the global periphery) for post-war reconstruction and prevention of further austerity policies;

– protection against gender-based violence and guaranteed effective implementation of the Istanbul Convention;

– respect for the rights and empowerment of LGBTIQ+ people, national minorities, people with disabilities and other discriminated groups;

– implementation of the reproductive rights of girls and women, including the universal rights to sex education, medical services, medicine, contraception, and abortion;

– guaranteed visibility for and recognition of women’s active role in the anti-imperialist struggle;

– inclusion of women in all social processes and decision-making, both during war and in peacetime, on equal terms with men;

Today, Russian imperialism threatens the existence of Ukrainian society and affects the entire world. Our common fight against it requires shared principles and global support. We call for feminist solidarity and action to protect human lives as well as rights, social justice, freedom, and security.

We stand for the right to resist.

If Russia lays down its arms, the war will end.

Daria Saburova, Researcher, member of the “European Network of Solidarity with Ukraine”

Olga Kostina, Member of the initiative group “Equals in Kryvyi Rih” promoting and supporting gender equality in the city of Kryvyi Rih

Natalia L., Co-author of a fanzine about women and trans people in precarious work settings

Alona Lyasheva, Member of the editorial board of Commons: Journal of Social Criticism

Anastasia Chebotaryova, Member of the “Feminist Lodge”, a grassroots initiative of young feminists

Daria Gorobets, Member of “Yafa”, a feminist group from Zaporijjia

Liza Kuzmenko, Head of the NGO “Women in Media”

Anastasia Fischenko, Student at the Taras Shevchenko National University of Kyiv, member of the vegan and anarchist organization “Solidarity Kitchen”

Oksana Pavlenko, Editor-in-chief of the divoche.media

Kateryna Tarasyuk, Lecturer in Slavic languages and cultures at the University of Strasbourg

Anastasia Ryabchuk, Associate Professor, Department of Sociology, NaUKMA, member of the editorial board of Commons: Journal of Social Criticism

Julia Dupeshko-Jus, Community activist, feminist, member of “Steps to the Future” and “One of Us” initiative

Natalia Omelchuk, activist, co-organizer of the “One of Us” initiative

Daria Yemtsova, Historian in the Memorials Brandenburg an der Havel

Lilia Hryhorieva, Member of the Union of communication workers of Ukraine

Sfera/Sphere, Organization representing the LGBT+ community and the women of Eastern Ukraine

Insha/Different, LGBTQI+ feminist and inclusive organization from city of Kherson

QueerLab, Cooperative that provides workplaces and/or necessary services and products to refugees

Institute of Gender Programs, Organization promoting human rights and gender equality in the defense sector in the context of Russian aggression

Center for Empowering Refugees and Immigrants, mental health and social services for refugees and immigrants (USA)

Where Are The Women, Gender Sensitisation Training (India)