Proposed for publication by Fotini Sianou

We Give Up NOT A WORD of the Istanbul Convention, despite the Council of State’s Decision!

On July 19, 2022, the Council of State, Turkey’s highest administrative court, announced its decision on a series of lawsuits filed for the annulment of President Erdogan’s decision to withdraw from the Istanbul Convention. The court pronounced the withdrawal decision legal.

Unfortunately, this court decision and its legal reasoning set a precedent that can enable Turkey’s withdrawal from other international conventions that protect fundamental human rights by a single person’s decision. Despite the fact that the investigating judge, the prosecutor, and two of the court’s five judges stated that the President’s decision was bluntly unlawful, regrettably, the other three judges on the court did not, or could not, reach a verdict that was based on law and conscience. 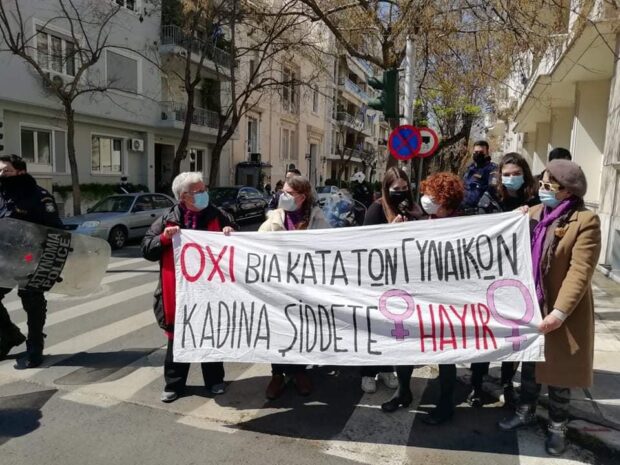 Here the protest of Greek feminists on the 26/3/21, in front of the Turkish embassy, where all 7 of the protesters were arrested and taken to the local police station. Soon they were released and charges were not pressed.

This verdict and the preceding events confirm what we have known for some time: in Turkey, there is no independent judiciary. It should be noted that the President, who was the defendant in the annulment cases, had visited the Council of State in person; he had appointed new judges and prosecutors to the Council of State; and the renewal of the seats at the Council of State Administrative Litigation Chambers had been prevented to ensure a majority that opposed the Convention. Thus, this decision, which ravages the principle of the rule of law, is a political decision – not a legal one. The loser in this case is the rule of law, as well as the entire country.

Should this verdict be upheld, all other international conventions and progressive national laws would be in danger. Not only the principle of the rule of law would be destroyed, but also the legal protection for the entire country and every citizen’s rights would be obliterated.

We will never accept this decision!

We hold the signatories of this ruling responsible for every single femicide committed in this country, for all violent crimes against women and LGBTI+ persons, and for the usurpation of the rights of the entire society by a one-man regime.

At this juncture, we invite all opposition parties to defend the Istanbul Convention explicitly and unequivocally, to implement its provisions in all areas, and to declare that Turkey will become a party to the Convention again, immediately after the elections.

There should be no doubt that we will appeal this decision; if needed, we will take the case to the Constitutional Court, and we will take all necessary legal actions, including applying to the European Court of Human Rights. We will give up neither our rights, our lives, nor the Istanbul Convention.

The Women’s Platform for Equality –EŞİK