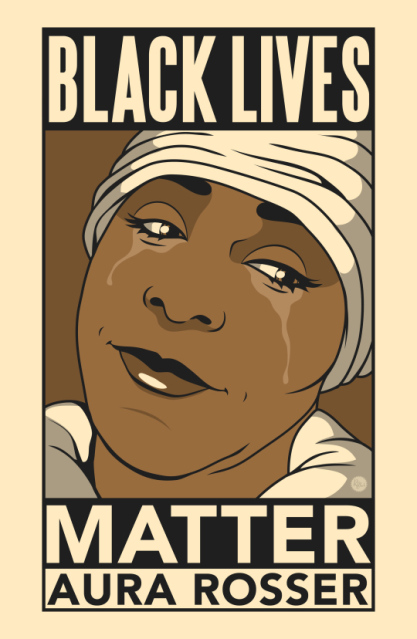 1. On November 9, three months to the day after Ferguson police officer Darren Wilson executed Mike Brown, Ann Arbor police officers killed a black woman named Aura Rosser in her home on the west side of the city. The official story released by the police is that Aura “confronted” the officers with a “fish knife.” Her boyfriend dismissed that claim,demanding “Why would you kill her?” Aura’s sister noted that she had worked in the food service industry for years and loved to cook, especially when she was upset. It helped her relax. The police shot Aura as she was coming out of the kitchen. She was probably cooking seafood.

In spite of the ongoing rebellion against police violence in Ferguson and around the country, not much happened in the first couple weeks after the killing of Aura Rosser. The local media reported the story the way the cops told them to, criminalizing Aura and her boyfriend and speculating about toxicology reports. It’s a familiar script. Ann Arbor is a mostly white, liberal college town. Maybe it’s not surprising, then, that the organizing first started somewhere else. Far more racially and economically diverse, largely due to alegacy of segregated housing, Ypsilanti also bears more of the brunt of Washtenaw County’s policing apparatus. It was there that a group of activists calling themselvesRadical Washtenaw organized the first demonstration in the area. It was a small gathering in downtown Ypsi, maybe about 40 or 50 people, who spent an hour holding signs, meeting each other and chanting to get the word out, writing emails and letters to the city council to demand justice.

What really kicked things off was the grand jury decision in Ferguson. Responding to the national call for actions in the wake, a small group of organizers called for a demo in Ann Arbor with the hope that 50 or 60 people might come out. It was set up as a “vigil” because the organizers weren’t sure there wouldn’t be enough people to march. Candles were acquired. But the grand jury decision was a spark that during the next 24 hours caught and spread like a prairie fire. The demo on November 25 was unlike anything folks have seen in Ann Arbor for years, even decades. Upwards of 1000 people came out to hear speeches by black, Palestinian, and Mexican students and community members articulate the specificities of anti-black racism and its overlaps with and divergences from other forms of racialized state violence both in the United States and abroad. Then, behind a glittery banner reading BLACK LIVES MATTER, the crowd easily took the streets and marched through downtown to the police station, blocking traffic the entire way.

There, a young black woman who had shared a jail cell with Aura Rosser grabbed the megaphone. “If you don’t know, we are at war! And you can’t fight war with peace. Tomorrow we go to war, ” she yelled. An older white woman in the crowd, a product of the New Left generation, yelled back, “No, tomorrow, we go to work, to work together.” The young woman responded, “Ya’ll ain’t hearing me.”

Energy was high after the march. An assembly was called for the following Friday, and 250 people showed up and collectively decided that the next action would take place at the Ann Arbor city council meeting on December 15. A smaller group of about 50 people signed up to organize the action. On a Monday night, in the middle of finals, 200 people came out and took the streets again. Chanting “How do you spell murder? A-A-P-D!” they again blocked the streets of downtown Ann Arbor until they pulled up outside the County Building where the meeting was being held. As chants of “No justice, no peace” echoed off the downtown town buildings, the mayor, agitated, came out, “Who is in charge of this?” “It’s America, you have the right to protest, but what are you planning on doing?” During the public comment section of the city council meeting, four demands were presented: fire the killer cop, suspend his paid leave, pay for the burial of Aura Rosser, and address the structural racism of policing in Washtenaw county. A second speaker called for three minutes of silence, one minute for each of Aura Rosser’s children. After fifteen seconds, the mayor tried to move on to the next agenda item. The gallery erupted into a volley of boos, feet stamping, and cries of “shame” and “three more minutes,” and he was forced to yield and sit quietly until the speaker stepped away from the podium.

It’s worth pausing for a moment to emphasize how out of the ordinary this is. In this respect, Ann Arbor is a testament to the emptiness of liberal politics. Speaking at city council is preferred to rallies, and rallies are preferred over marches, and marches, when they do happen, happen on the sidewalk. One friend who grew up in Ann Arbor told us she couldn’t remember any marches like these. The anti-war protests in 2003 may have been a little bigger, she continued, but they had a totally different character.

Could Ferguson really be everywhere? ask the white liberals. Yes, white supremacy is at work even in a mostly white, liberal college town like Ann Arbor. But isn’t this the point? Of course policing is racist here. How could it be otherwise? If anything, it is in places like this that white supremacy is at its most intense. Following Saidiya Hartman, we might decide to look not to the “terrible spectacle” of racist killer cops and turn instead to “those scenes in which terror can hardly be discerned.” This approach might lead us to consider, among other things, the anti-racist organizing that took place on the campus of the University of Michigan last year, without which none of what is happening in response to Aura’s killing would have been possible. The #BBUM campaign, to take one example, highlighted not only declining black enrollment at the university but also the daily experiences of racism of black students in this overwhelmingly white space. A black student from Detroit named Dan Green described the unsettling feeling of traversing and inhabiting this space: “I feel less safe in Ann Arbor than I do in Detroit.” The liberal white college town operates as a machine for the surveillance and policing of black bodies.

To express surprise that “this” could happen “here” is only to ignore or erase the historical processes of gentrification and the racialized production of surplus populations at work throughout southwest Michigan. “Ann Arbor” is not a place, governed autonomously by a progressive city council, but a node in a national and global network of capital flows and accumulations. The overwhelming whiteness of the city—in large part a function of the overwhelming whiteness of the university that dominates it—cannot be separated from the unthinkable quantities of capital that have pooled and congealed there, or the relative blackness and poverty of nearby Ypsilanti and Detroit. To put it another way, Ann Arbor itself is a testament to the fact that “this” has already happened “here.” It was “this” that made “here” what it is.