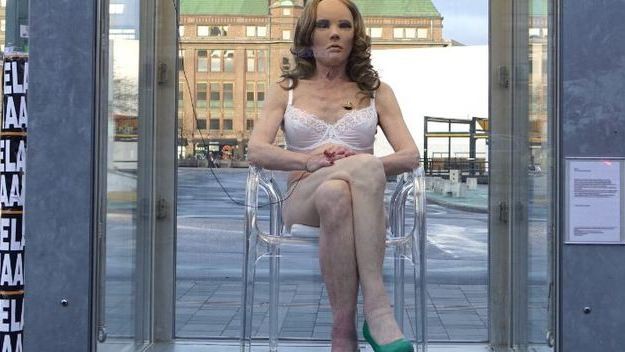 By The Art Newspaper. From In The Frame
Published online: 26 November 2014

An 83-year-old flasher—that’s what Finnish police saw in Dries Verhoeven’s performance piece Ceci n’est pas mon corps (This is not my body), which came to Helsinki earlier this month. For the work, part of the Baltic Circle International Theatre Festival from 9 to 16 November, a different scene was played out each day in a transparent cube installed in the city centre. One scene, about the aging body, features an older woman sitting naked on a chair wearing a mask of a younger woman’s face. Since public obscenity is outlawed in Finland, the performance was only allowed to continue after the woman put on underwear. Police were alerted to the work following calls from the public about another scene, in which a half-naked girl sat on an older man’s lap—although this was allowed to go ahead unchanged. The full piece was previously shown in eight European cities without incident, including Hamburg, Strasbourg and Basel, leading the festival’s director, Eva Neklyaeva, to say she was “ashamed” about the censorship, and a legal complaint has been filed against the city.