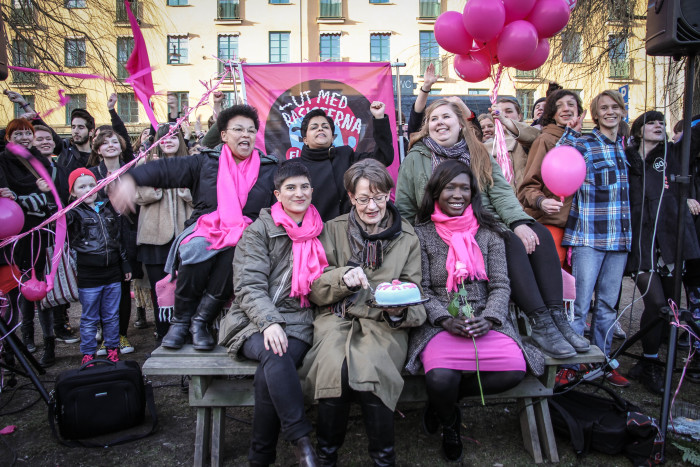 Democratic countries tend to believe, at least in theory, in the concept of equality and shared responsibility for society. Whether it is working conditions, voting rights or health care, countries vary on how well they achieve these goals. While the United States has historically been held up as a beacon of democratic ideals, and often rightfully so, many European countries have done more to put these ideas into action. They have figured out how to provide a social system that supports its citizens from birth through retirement with things like universal health care and quality education.

Of course, no system is perfect and there are always those that wish to maintain a certain power structure. Recent years have seen a rise in far right political groups who rail against liberal European policies, and a rise in anti-immigrant sentiment, frequently filled with racism. Like the rest of the world, they are also dealing with gender inequality.

All of these issues were highlighted in Sweden’s general elections earlier this month. For much of the 20th century, Sweden had been ruled by the left-leaning social democrats. The parliamentary government has been praised for its social policies, including family friendly reforms which allowed for both men and women to take parental leave. In 2006, the Moderate Party, a group described as “center-right democrats” ushered in an era of pro-market and tax reduction reforms. This coincided with a rise in xenophobia and racism, a response to the increase in refugees from war-torn nations in the Middle East and Africa. In the 2014 elections, the far-right anti-immigration Sweden Democrats became the third largest political group in the parliament and the nation.

However, it was the left wing of the political spectrum, led by the Social Democrats, that was able to wrestle the majority of votes this year, helped in large part by the rise of a new party called the Feminist Initiative.

Founded in 2005, the Feministiskt initiativ (Fi) begins with the premise that equality is the answer to the majority of society’s ills. Their election platform points out that equality is not about economics (though that is important). It means that everyone should be able to ”participate and feel reflected in the cultural, political and economic spheres.” Of course, in a patriarchial, male-dominated culture, it is women who are disproportionately affected by inequality. When factors such as race, disability and sexual orientation are added to the equation, equality in society is pushed even further out of reach.

The Fi speaks to all who believe this has to change.

The rise of a feminist party in Sweden is not incredibly surprising. In addition to allowing up to 12 weeks of paid parental leave for both men and women, Sweden was the first nation to introduce a gender-neutral pronoun (hen), and has a formal gender quality measure in its constitution. They also have a generous subsidized childcare program. However, most of its corporations and boards are headed by men, who still earn more money than women. Women are also more likely to be in lower wage jobs and retire into poverty.

This is why the Feminist Initiative proudly proclaims themselves the first feminist political party.

After a much-hyped genesis that included financial support from the likes of Jane Fonda and Benny Andersson, a founding member of Abba, Fi was slow to find its political footing. Their founder, Gudrun Schyman, was a lightning rod of attention and controversy. She famously burned 100,000 Swedish Crowns ($15,000) to protest unequal pay. A former contestant on the Swedish version of Dancing With the Stars, her first proposal — a tax on men to help combat domestic abuse — caused many to not take them seriously. However, with each subsequent election, more and more people were paying attention to their message. In May, their hard work paid off when Sweden elected a Fi party member, Soraya Post, to the European Parliament.

Soraya Post is also a Roma, considered one of the most maligned minorities in Europe.

In Sweden’s general election this month, Fi fell short of the 4 percent threshold needed to gain a seat in parliament. However, it’s campaign for a broad and inclusive anti-racist feminism in the political discourse forced the other left leaning parties to incorporate similar ideals into their platform. While Fi will not be directly involved in the new government’s herculean task of forming coalitions, they will no doubt have a great deal of influence. Of the 3.1 percent of Swedes that voted for the party, nearly 70 percent were under the age of 25. This makes them the largest party outside of parliament.

This could mean that the Feminist Initiative is the political party of the future, not just in Sweden, but possibly the world.