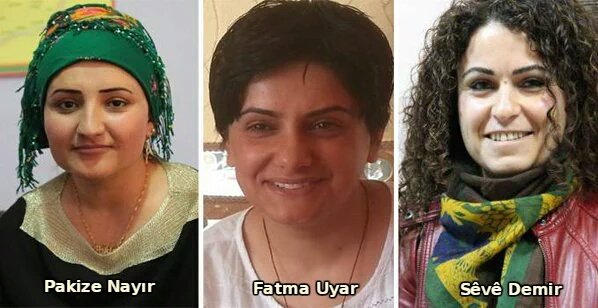 We from World March of Women, feel particularly very struck by this crime. In 2015 crises and war at global level could not constrain the WMW from organising its 4th International Action everywhere including conflict areas, rural places, suburbs and mountains wherever women are in resistance. As part of the global action, the European Feminist Caravan was launched in the Kurdish territory of Turkey to reinforce and support Kurdish women in their struggle for autonomy and self-determination over their bodies and territories. We also drew attention to the alternative models to this capitalist, colonial and patriarchal system constructed by women in resistance.

On 6-7th March 2015 thousands of local women from both sides of border joined forum debates, concerts, marches and activities organised for the launch of the 4th International Action in Nusaybin, a territory divided by the Turkish-Syrian border. Women taking active role in constructing a new society shared their inspiring experiences from self-defence to local communes.

Unfortunately conflict restarted with the failure of peace talks after general elections in June 2015. Hundreds of civilians, most of whom are women and children were killed, hundreds injured and thousands jailed in this conflict. Unfortunately, the conflict between the Turkish government and the Kurds has resumed due to the failure of peace talks after the Turkish general elections in June 2015. This new moment of conflict results in the death of hundreds of civilians, mostly women and children, hundreds of

injured and thousands of incarcerated people. Popular assemblies in Kurdish towns and cities declared self-governance as a response to violent state policies targeting towns and cities. 17 co-mayors were arrested, including Sara Kaya hosting us during the 4th International Action in Nusaybin.

Curfews have been declared in the towns declaring self-governance where electricity, water, communication are cut; whoever goes out of the door whether it’s a child, an elderly, a pregnant woman or a sick person is killed by snipers; As people are injured they cannot seek medical assistance. People cannot bury their dead. The curfew leaves people abducted from their homes for weeks without nothing to eat, this exacerbated the health situation. In this situation the increase in spontaneous abortions has increased. In this situation spontaneous abortions has increased.

In Nusaybin curfew was declared 7 times and the last one declared on 14th December still goes on.

Lastly three female Kurdish politicians were slaughtered by security forces on 4th January in Silopi. One of them was Séve Demir who coordinated the 4th International Action events of the World March of Women in Nusaybin.

* To end impunity and bring perpetrators to justice

* To end the assassinations of politicians, human rights advocates and journalists

* To withdraw military and paramilitary forces from Kurdish towns

* To declare ceasefire and resume the peace talks

* To stop abuse, insults and maltreatment of people and specially women

We will continue marching until all women are free!