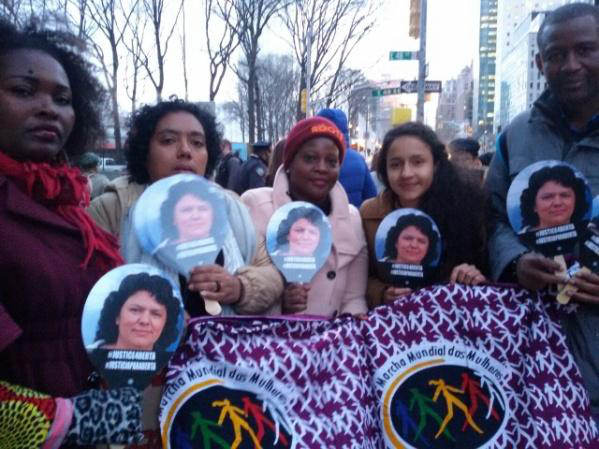 The rage, the anger and the pain we’re feeling for our friend and sister Berta Cáceres’ loss is still strong in our heart.
Berta was an indigenous leader and a spokes woman for the Council of Popular and Indigenous Organizations of Honduras for more than 20 years. She was also a tireless campaigner for the rights of farmer communities and for the Honduran Lenca people, and she has also inspired other organizations and activist movements’ social struggles both regionally and internationally.

In the early hours of the 3rd of March 2016, Berta was brutally murdered while sleeping at home by armed men. Her activism and work were a threat to the interests of neoliberal capitalism, stealing the common good and imposing massive projects displacing whole villages and violating Mother Nature.

As Berta did, other sisters, activists and fellow fighters are also protecting, together with their communities, the Sisters from the WMW with Berta Cáceres ́ water, the land, the air and the woods from big daughter multinationals who are just concerned with their own profits. In different corners of the world these brave women keep on their fight to protect their life, even while experiencing physical aggression and death threats. This year’s celebration on the 8th of March, commemorating international women’s fights, is marked by this loss and by this violence. But this gives us a reason to keep the efforts and our resistance.

That’s why we want to declare that, despite our sorrows after Berta’s murder, our eyes will not cloud over, and the lump in our throat will not stop us shouting out for Justice. Because the World March of Women is an unstoppable international movement. And because we’ll strengthen our fight; our resistance will be stronger and our answers to the aggressions from the neocolonialist and patriarchal capitalist system, better coordinated, faster and more effective. Because an injury to one, is an injury to all.