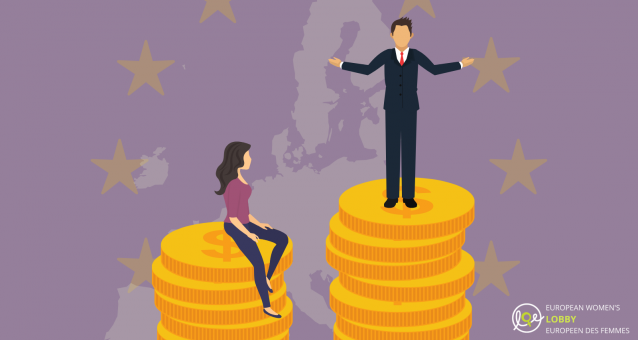 [Brussels, 19 March 2021] The European Women’s Lobby (EWL) welcomes the recently adopted legislative proposal on pay transparency by the European Commission, which has been long overdue. While there are many positive measures in the proposal including a definition of ‘work of equal value’, the EWL regrets that mandatory reporting on the gender pay gap only concerns companies with 250 workers, which excludes many sectors where women work, particularly in Small and Medium Sized Enterprises (SMEs).

We welcome the measures to facilitate the right of workers to access information to assess whether they are being discriminated against in comparison with other workers in a similar position. The EWL particularly welcomes reference to the concept of ‘work of equal value’, which provides some clarity in order to define how this can be established within companies and especially across sectors. Furthermore, we welcome measures calling for ‘gender neutral objective criteria’ to compare and determine the value of work. It is crucial that this includes people-related skills and responsibilities in establishing this criteria and ultimately in the transposition of the directive.

This is crucial to close gender gaps in the labour-market which remains highly gender-segregated and in which women are concentrated in a limited number of specific people-centred sectors, such as health, care, education, retail, – sectors that are characterised by poor pay, less favourable working conditions and high levels of part-time work. As such, this new legislative proposal must complement the legal framework on part time work concluded by the Social Partners in 1997 1, which clearly states that part-time work should be ‘voluntary’, ‘non-discriminatory’ with no ‘less favourable conditions’, and provide the possibility to ‘transfer from/back to full-time/part-time’. In line with the measures outlined in the pay transparency legislative proposal, it is urgent to monitor the application of the part time work framework, to ensure that wages are in line with the full time equivalent to address the gender pay gap in part time occupations.

For the EWL, the proposed directive is an important milestone in closing the gender pay gap and in particular in recognising the intersectional axes of discrimination on the basis of sex, ethnic origin, religion or belief, disability, age or sexual orientation. However, the EWL questions whether this legal instrument is enough to address the long-term persistent and structural dimensions of inequality between women and men, which are related to gender stereotypes and mirrored in the labour-market. Pay transparency alone will not address the deep-rooted gender inequalities, but it is a first step in the right direction. An encompassing legislative and policy framework at EU level is necessary to close the gender pay gap, and address the gender lifelong earnings, pension and subsequent poverty gaps.

Additional necessary measures include mandatory pay audits in all companies, regardless of the size of the workforce. Women working in SMEs and/or smaller structures where neither human resources and/or trade unions are present should also be able to provide mandatory pay audits and receive technical support to do this. All companies should establish mandatory gender action plans, including transparency in pay composition and other measures to address the gender pay gap and that is monitored annually.

The EWL looks forward to engaging in the next steps in the process of adopting a meaningful pay transparency proposal that will bring effective change to all European women in their lives.