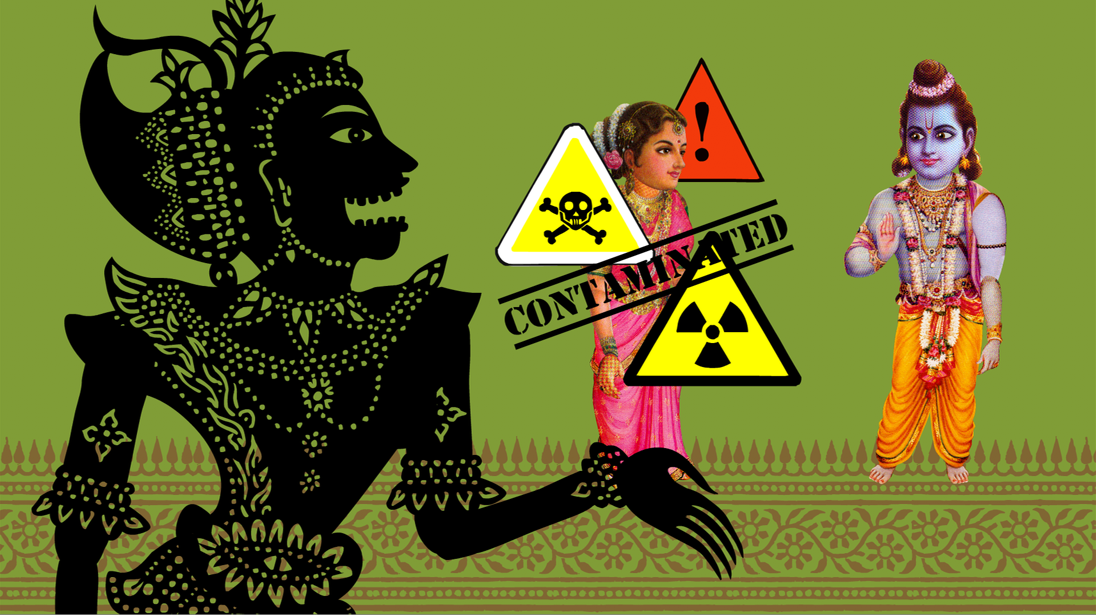 Nina Paley is the writer, director, animator, and producer of the highly acclaimed animated feature film, Sita Sings the Blues. At one point, her film was illegal due to copyright laws; sharing it with audiences was technically a Federal crime. The film is now legal, and free to share (see sitasingstheblues.com). Nina is now artist-in-residence at Free Culture advocacy nonprofit QuestionCopyright.Org. Prior to her feature film debut, Nina was a syndicated cartoonist. A 2006 Guggenheim Fellow, Nina is currently producing a series of animated shorts about intellectual freedom called Minute Memes.

encountered a story where that kind of martyrdom was so exalted. Trivandrum had art everywhere and I was really overwhelmed by all of that art so I tried to process it somehow. I started making drawing and designs from the Ramayana, but they were very cartoony . During the days I would go to my then-husband’s office, which was an animation studio, and I saw that they had the walls covered with very Western-style art. Everything outside of that was very Indian; I think that my subconscious was just trying to process it all, and the characters that I drew eventually became all of the characters in the film. I was making these drawings on a laptop.

When I went to New York on a business trip and my then-husband broke up with me by email, I developed a very new and different attitude toward the Ramayana. I was immersed in the story, not fully understanding it, but wanting to understand it. I was finding that even though the characters’ behaviors were incomprehensible to me, I was drawn in on a deeper level. I found myself becoming even more obsessed with the story. If someone could have built me a funeral pyre to hop on top of, I would have; I was devastated. I was wanting my ex back even though he treated me badly. I thought that my life had no meaning without him. I was going through what many people go through when they break up, and I had the idea that these feelings were foolish, and that as a modern feminist that I should not have these feelings. So I felt that by getting closer to this story and the characters that it really helped me explore and accept myself and these feelings that were so difficult and hard to accept.

BT: How long did it take to finish Sita Sings the Blues
NP: The whole project took about three years of work, but the full process took about five years. The first drawings that eventually became the film were drawn in 2002.

BT: How many people worked on the project?

NP: I did all of the animation and all of the designs. For audio I hired actors, and the voices of the narrators were friends of mine. Greg Sextro did all of the audio mixing. There were also musicians that I commissioned for the film.

BT: What do you think has prevented this film from going into theaters?
NP: It actually is going into theatres, slowly. It’s not following the process that most movies do; this film is going to have a very long, gradual release. All of the major distribution companies turned it down, but as I am sure you know independent film distributors are having a crisis. The smaller distributors don’t have a lot of money, many of them have gone bankrupt and because of this they have become very conservative and do not want to take any risks. Distributors have to pay a lot of money for advertising, but my film is going into theatres based mostly on word of mouth. So the film is actually getting around, its getting around slowly. Some the bigger films are released with great fanfare and advertisng and never heard from again, but “Sita” has been building up momentum and will continue to be heard about through word of mouth.

BT: You tell this story with a very interesting style, how did you come up with this style?
NP: I was just trying to be honest. I encountered the Ramayana when I was 35 years old, I came to it as an adult and also as a cultural outsider. I did not come across a single, “true” Ramayana; I encountered many different versions, and I was just trying to figure out what they meant. When I asked Indian friends about the Ramayana, men would tell me one thing and women would tell me another thing, older people would tell me something else and I was just trying to figure out what it was. I’m sure that if I had grown up with a native Ramayana tradition, then I would have clung to one version, but I did not grow up that way and I was not sure which version to take.

BT: I heard that many of the locals did not like your take on the story, is this true?
NP: The Hindutvadis (fundamentalists) hate it. For them there is only one true story, and that is the TV series form the 80’s. If it is not from the TV show then it is wrong. As far as they are concerned that is the true one and they need not bother with any other translation. I think that because “Sita” is a feature film they assume that there is money behind it and that by protesting then they will gain more publicity for themselves, but their actions are actually garnering publicity for the film itself.

BT: Do you have any plans for another animated project?
NP: I’m making short films about intellectual freedom. I am definitely a free culture advocate. I think that one of the reasons that the film has done so well is that I have given it to the audience. I want people to really think about what price we are paying for these elements of media that are controlled by these large media corporations.

BT: What has the response been from the younger generation?
NP: I have gotten great responses to this film. It takes a while for people to see the film, but I have had fabulous responses.

BT: How did you decide on the music in Sita Sings the Blues?

NP: I was homeless in New York and staying with people and I was in the midst of my breakup. I was sleeping on the sofa of an old record collector. From his collection I heard Annette Hanshaw. Her voice was great and she was doing so many songs about heartbreak. She even did some songs about suicide! Her voice just really got me and, along with Sita’s story, motivated me. It could have been easier and less controversial to not deal with her music or the Ramayana, but they both just got me. It is more important to follow my heart and my inspiration than to just do what is safe.

BT: What are some of your favorite animated films?
NB: I really enjoy Allegro non Troppo by Bruno Bozzetto. It is from 1976 and it is fantastic. I still like The Yellow Submarine. There are a lot of short films, such as Art and Theft, but I could not begin to list all of the great animation I love.