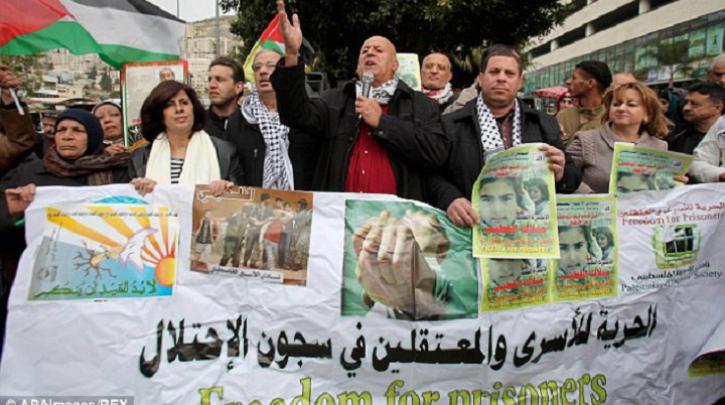 A 14-year-old Palestinian girl who was tried before an Israeli military court for throwing rocks at passing cars in the West Bank has been sentenced to two months in prison.
The case of Malak al-Khatib, from Betin, in the West Bank, has gripped Palestinians who say her treatment demonstrates Israel’s ‘excessive’ measures against stone-throwing youths.
Arrested last month, she is one of only a few underage Palestinian girls who have ever been arrested and sentenced by Israeli authorities.
Palestinian officials say she is the youngest girl ever detained and sentenced by Israel — a claim Israeli officials and rights groups said they were not able to confirm.
On December 31 Malak walked to a West Bank road used by both Israelis and Palestinians and began throwing stones at passing cars, officials told her parents.
Israeli security forces arrested her and said they found a knife in her possession.
Malak was charged with stone-throwing, attempted stone-throwing and possession of a knife.
Under a plea bargain, she was sentenced to two months in prison and a $1,500 fine.
Her father Ali al-Khatib, said: ‘A 14-year-old girl won’t pose any threat to soldiers’ lives.
‘They are well equipped and well trained so what kind of threat could she have posed to them?’

Under a plea bargain, she was sentenced to two months in prison and a $1,500 fine. Malak al-Khatib, 14, was tried before an Israeli military court for hurling rocks and has been sentenced to two months in prison. Her mother Khawla Al-Khatib holds a poster of her daughter at her home in Beitin village

Having spent four weeks in detention since January 31, she has another four left weeks left at a central Israeli prison for women.

Out of more than 5,500 Palestinians currently held by Israel, about 150 are underage and the vast majority of them male, according to official figures provided by Israeli human rights group B’Tselem. Arrested last month, Malak is one of only a few underage Palestinian girls who have ever been arrested and sentenced by Israeli authorities

Malak is among just a handful of underage girls ever held by Israel.

Palestinians and rights groups have criticised Israel for its response to rock-throwing.

Israel views rock-throwing as a dangerous tactic and at times a life-threatening attack, and claims it can be the first step toward militancy.

Palestinians see it as a legitimate way to resist Israel’s occupation.

Israel was hit by a wave of riots by Palestinians in east Jerusalem last year, following the killing of a 16-year-old Palestinian boy by Jewish extremists in revenge for the abduction and murder of three Israeli teens.

Up to 1,000 protesters were arrested, many of them for stone-throwing.

Israeli police said many of those arrested were underage.

Some of them, schoolbags still strapped to their backs, hurled stones at security forces on their way to and from school.

Protests in the West Bank since then have been more subdued but still occur frequently with Palestinian protesters clashing with Israeli troops — incidents that often end in arrests.

Stones and small rocks have become a much-used weapon in the West Bank.

In the past six years, more than half of all arrests of Palestinian youths have been over stone-throwing.

‘These kids grow up with news about clashes, about oppression of Palestinian people in the West Bank and the Gaza Strip and they go to express themselves,’ Mr al-Khatib said.

Mr and Mrs al-Khatib said their daughter’s feet were shackled and she was handcuffed when she appeared in court.

Since her arrest, the case has received much media attention in the West Bank and spawned countless memes and caricatures, some showing Malak behind bars and holding a teddy bear. Protesters hold banners to show solidarity with prisoners in Israeli jails and highlight Malek’s case. They are pictured in Nablus, West Bank, yesterday

One drawing shows a cherubic Malak — whose first name means angel in Arabic — tied to shackles held by an Israeli soldier. On Twitter, supporters are using the hashtag #FreeMalak.

At her home, Malak’s bedroom shows the interests of a 14-year-old girl steeped in the realities of day-to-day life in the West Bank. Bracelets and necklaces bearing the colours of the Palestinian flag and a poster of a man from her village killed in clashes with Israeli forces contrast with a picture of Real Madrid forward Cristiano Ronaldo.

Sarit Michaeli from B’Tselem said that under Israel’s military justice system, Malak will not be afforded the same rights and protections as Israeli minors under Israel’s legal system.

‘An Israeli child will not be held in detention for three weeks, not even a boy, yet alone a girl, because of these protections provided to children by the Israeli youth law,’ she said.

Israel captured the West Bank, along with east Jerusalem and the Gaza Strip in the 1967 Middle East war – territories the Palestinians claim for their hoped-for state.

Palestinians living in the West Bank are subject to Israel’s military justice system, but Jewish settlers and Israelis fall under a separate legal system.

Issa Karake, head of the Palestinian government’s Prisoner Affairs Department, said Malak’s case is ‘just another in a policy meant to break the spirits of young people resisting the Israeli occupation’.

‘The Israelis show no tolerance with the Palestinian children,’ Karake said. ‘The Israelis are crushing a whole generation.’