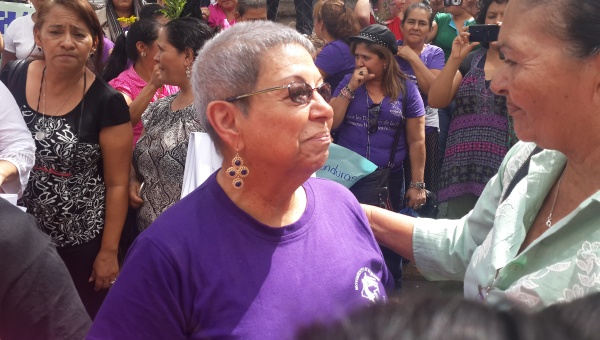 Gladys Lanza’s defense indicates they will continue fighting for her.

Feminist leader Gladys Lanza has been found guilty on the charge of defamation against the public official Juan Carlos Reyes, and is facing up to four years in prison and is barred from participating in political organizations. However her defense says that this is not the end of her trial.

“The court has made the announcement, she was declared guilty. Now what is left to do is decide how many years she will be condemned to prison for the crime of defamation and barred from civil activism. That will be decided by the trials court, but obviously that’s not where the process ends. We will go to the last recourse according to the law and appear before the judges of the criminal division,” explained Gloria Garcia, who is Lanza’s Defending Lawyer.

The official, Reyes, was accused four years ago of sexual harassment by one of his employees. The employee looked for support in the Feminist Organization Visitacion Padilla, that is coordinated by Gladys Lanza. The organization has been accompanying the victim for the last four years. Two years ago the public official began a trial against Lanza.

Feminists from the Visitacion Padilla organization demonstrated in front of the Supreme Court after the verdict against Lanza. The initial charge against her was only defamation, but now the prosecution has also put forward charges of gender crimes against his client, Reyes, claiming that Lanza is attacking him because he is a man. This would add two more years on the possible four year sentence.

“This means for the regional feminist movement a criminalization of the defense of women’s rights and that is clear now. They are taking out their claws, now the prosecution is adding new charges for the crime of discrimination because he is a man. We can see how the laws and institutions that were initially thought to protect the minorities are inverted and used against the most vulnerable people when there are so high rates of impunity,” commented Daisy Flores, Regional Coordinator Just Associates JASS, an organization that supports feminist movements throughout the world.

The judge announced that the final verdict, including how many years Gladys Lanza will have to go to prison, will be given on March 6. After this date the feminist leader will have one last opportunity to try to avoid a prison sentence. Meanwhile the Honduran feminist movement guarantees that they won’t remain silent.

If Lanza is put in jail it will be the country’s first time that a human rights defender is punished for doing her work supporting a victim that is looking for justice. In Mexico and Central America several feminist organizations are organizing solidarity actions to stop the Honduran government from imprisoning one of the most emblematic figures in the fight for the respect of women’s rights in the region.