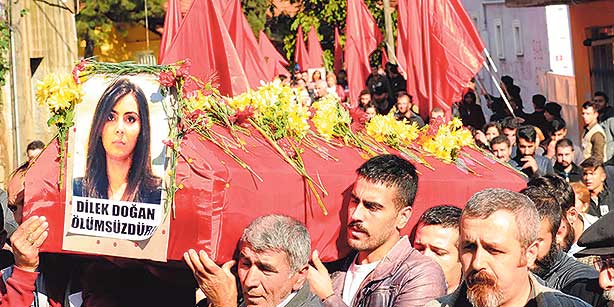 A number of opposition lawmakers have criticized the government over the death of 25-year-old Dilek Doğan, who was shot by police in her house during an anti-terror raid and later died of her injuries, saying that nobody should commit crimes in the expectation that the Justice and Development Party (AK Party) will protect them because the AK Party will not be in power for ever.

Doğan was shot Oct. 18 during a raid that the authorities said was to search for a suspected Revolutionary People’s Liberation Party/Front (DHKP/C) militant in İstanbul’s Küçükarmutlu neighborhood. She died of her wounds at an İstanbul hospital on Sunday evening.

Pro-Kurdish Peoples’ Democratic Party (HDP) Co-chair Selahattin Demirtaş described Dilek’s death as a “huge tragedy,” saying: “Will the prime minister go out and ask people to jeer [her family] or will he share the pain of her death [with her family]? Will he have the perpetrators removed from their posts?” Demirtaş’s quote was a reference to Berkin Elvan, a teenager who died after being hit by a tear gas canister fired by the police during the Gezi Park protests in the summer of 2013. On March 14, Erdoğan asked a crowd to jeer Berkin’s mother during a rally in Gaziantep.

“Justice will be sought for these massacres and these killings. Nobody should commit crimes relying on [the AK Party to cover them up] because they will not continually be there to have your backs,” Demirtaş said, pointing to the fact that the AK Party lost its 13-year parliamentary majority in the June 7 general election.

“Everybody should abide by the law. The rule of law will be instated in this country and all of these crimes will be accounted for, everyone can count on it,” Demirtaş told workers at the Serapool factory in İstanbul’s Pendik district, who have been on strike for 137 days.

“If freedom, peace, democracy are not [instilled into our lives] together, we cannot lead just lives and we cannot ensure freedom,” he added.

A funeral ceremony has been held for Doğan in a cemevi — an Alevi place of worship — in the Pir Sultan Abdal Culture Association Boğaziçi Cemevi in İstanbul’s Sarıyer district. She was later placed in another cemevi from where she will be taken to her native province of Kahramanmaraş for burial.

Sezgin Tanrıkulu, a deputy from the opposition Republican People’s Party (CHP), called the death “yet another incident that we will hold the government to account for.”

“A young woman was murdered because she told the police not to go enter her house with their shoes on,” CHP lawmaker Barış Yarkadaş told reporters at the hospital. “We will fight together with the family so that those responsible will be brought to justice. We will not let them get away with it.”

Doğan’s family said that a police officer shot her in the chest after she insisted that the police officers wear overshoes before entering the house, while the police said she was shot during a scuffle that erupted when a family member attempted to snatch a gun from one of the officers.

Aysel Doğan, Dilek’s mother, said during the funeral ceremony that she would be able identify the police officer who shot her daughter. “The moment he entered the house, a gun went off. I thought he was shooting [a warning shot] into the air. It [the bullet] went into my child. I saw my child fall into a heap next to my feet,” she said. “I know his face. Let [the government] bring him; they won’t, they don’t have that courage. [The police] panicked and ran away.”

Oya Aslan, a lawyer representing the family, told reporters: “Dilek has been murdered and the killer is hiding. The truth will emerge about [the government’s] lies about a clash [in the neighborhood] and a suicide bomber.”

“The killer will be caught and punished sooner or later,” she added.

An investigation has been launched into the incident but the authorities quickly issued a secrecy order to block access to the investigation files.

While speaking to university students on Monday, Prime Minister Ahmet Davutoğlu said that the matter of Doğan’s death is being “investigated” and “if anything wrong has been done, the necessary action will be taken.”

Deputy Prime Minister Numan Kurtulmuş conveyed his condolences to the bereaved family and said that the culprits would be found. “During operations against [terror], we have to ensure our citizens’ safety,” he said on Monday according to a report in the Habertürk daily.

Kurtulmuş mentioned that the police officers who dragged the body of Hacı Lokman Birlik, the brother-in-law of HDP Şırnak deputy Leyla Birlik, behind a police car were suspended. “The next day [after images of Birlik emerged], we told everyone to be calm and that we would find whoever did this,” Kurtulmuş added.

Protesters staged a demonstration in front of the hospital where Doğan died and the forensics department where her body was brought for an autopsy. Social media users have also expressed their outrage at the death.