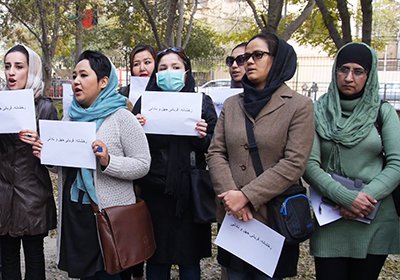 Dozens civil society activists gathered in capital Kabul to seek justice for 19-year-old Rokhshana who was stoned to death by the Taliban in western Ghor province.

The activists, mainly women, strongly denounced the public execution of a woman and called it an un-Islamic and inhumane act.

Forced to marry against her will, the young Rokhshana was stoned to death by the Taliban last week after she was caught eloping with another man.

The act saw global condemnation after footages of the stoning, which went viral on social media on Monday, showed her in a hole in the ground as scores of violent men casually hurl stones at her.

President Ashraf Ghani and CEO Abdullah both in separate statements condemned the incident and assured to bring the perpetrators to justice.

However the activists on Friday accused the government of being silent on what they called a “barbaric” killing of a woman in public.

They released a resolution in which they asked the government to identify what they said the Taliban and the religious scholars who decreed the stoning.

In the statement, they also demanded the government to interrogate the Police Chief of Ghor and the local officials over the incident.

The activists called upon all the people of Afghanistan to stand united against the tragic incident which they warned if neglected, “the women of the country would no longer be safe.”

This is not the first case a woman stoned to death in public. A number of similar cases have occurred in the past during the Taliban regime, ousted in 2001. 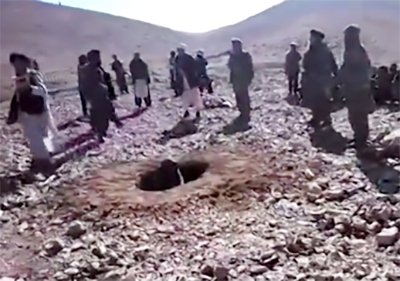