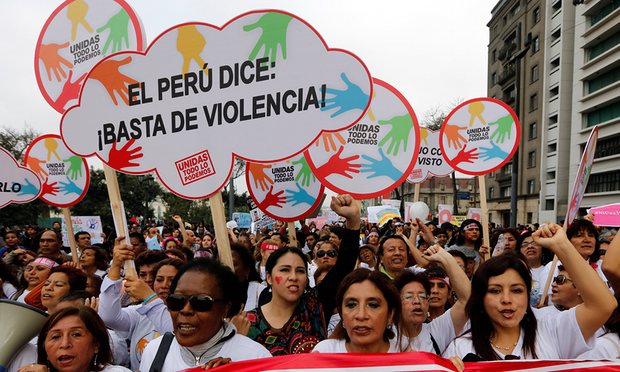 More than 50,000 people marched in Peru’s capital and eight other cities on Saturday to protest violence against woman and what they say is the indifference of the judicial system.

Officials said the size of the protest against gender violence was unprecedented in Peru and followed several recent high-profile cases in which male perpetrators were given what women’s groups said were too-lenient sentences.
The march in Lima ended at the palace of justice.

“Today, the 13th of August, is a historic day for this country because it represents a breaking point and the start of a new culture to eradicate the marginalisation that women have been suffering, especially with violence,” said Victor Ticona, president of Peru’s judicial system. Ticona said a commission of judges would receive representatives of the protesters.

“What we don’t want in Peru is violence against anyone, but especially against women and children,” he said.
Earlier in the day, Kuczynski said his government is “going to ask for facilities for women to denounce violence because abuse flourishes in an environment where complaints cannot be made and the blows are absorbed in silence and this is not how it should be”.

Peru’s march follows similar protests against gender violence in other Latin American countries, including Argentina and Brazil, held under the slogan #NiUnaMenos #NotOneLess.

Published in The Guardian