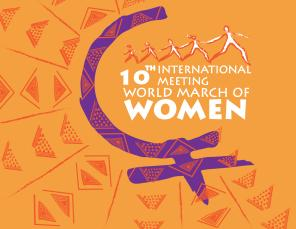 The World Social Forum took place from the 9th to the 14th August in Montreal, Quebec, a territory that we acknowledge as indigenous territory of the Mohawk people. This acknowledgement makes visible the colonization of these territories, as well as to take collective responsibility of the challenges faced by these peoples.

We, women of the WMW, denounce the visa denials that several militants have faced, most of them coming from the global south. We strongly denounce the restrictive migration policies implemented by governments and that contribute to the criminalization of militants from social movements. This situation prevented some leaders of the resistance against capitalism, patriarchy and colonialism in their respective countries from attending.

The meeting of our WMW militants allowed us to reconfirm the linkages between the different local struggles and connect on a global level the defense of our bodies, Mother Earth and territories.

We, Women from the WMW, denounce the coup d’Etat in Brasil, as well as the current government that took over. A government that is far right, sexist, racist, authoritarian, that also has the support of the mass media who rejectedcalling it a coup (using the word impeachment instead), and that is contributing to the criminalization of social movements.

Brazilian women resist, with the critical contribution of young militants. They are mobilized and developing feminist political training, for example, through the occupation of secondary schools that promote the understanding of the issue and resistance. In addition, in Brazil, as in some other countries in Latin América and Europe, feminists struggle for the right of abortion for all women and the fundamental right to control our own bodies.

In Brazil and the Americas, after 10 years of debate on the Free Trade Area of the Americas (FTAA), some left-wing movements are calling for a global day for democracy and against neo-liberalism. This is a very important step to develop anti-capitalist and anti-patriarchal international solidarity with the overall goal of articulating social movements between different countries. This day will end with a great mobilization on the 4th November under the slogan: “No step backwards!”.

In the United States, militants of the WMW, are mobilizing against the public policies of their country that are impacting women and other marginalized populations in the US and in any other part of the world from an anti-imperialist point of view. They are working to strengthen women’s leadership, as well as other people directly affected by oppressive systems and marginalized. They are also working to raise awareness of the many challenges faced by LGTBQ people in order to promote a greater inclusiveness within women’s movements and the WMW.

We, stand in solidarity with the Palestinian women in their struggle against colonization and for the freedom of their occupied territory. We denounce the violent repression against the Palestinian people, in particular against women who are at the core of the struggle for self-determination.

We stand also in solidarity with the Sahrawi women in the struggle to take back control over their territory.

In other countries of the Arab world, women are at the core of popular movements defending democracy, demanding women’s access to education, health, political participation and citizenship. Feminists in this region work to enforce laws and ensure equality for all women. With them, we speak out against the rise of religious fundamentalism and the tragic effects of imperialist policies.

Militants of WMW in Quebec are extremely proud to host militants from all over the world in the place where the WMW was born in 1998 and to share with them the current challenges that women from Quebec suffer.

In the current scenario, where the conservative right is rising, feminists are mobilizing to struggle against austerity measures and the privatization of public services that are impoverishing even more women and other people. They are also resisting to preserve water, as the source of life, and they are condemning this exploitation.

The activists of the WMW in Quebec, indigenous and non-indigenous, bonded and strengthened the solidarity around the decolonization between our peoples. We support the struggle of indigenous women for their right to self-determination and we demand a real investigation into the killing and disappearance of indigenous women in order to give visibility to the deep impact of sexism and racism on women’s lives and their communities.

We, the women of the WMW, participated in different workshops and actions organized in the WSF to speak out against climate change, different types of violence against women, privatization policies and austerity measures, the rise of fundamentalism, the control and militarization of territories in favor of capitalist goals, and the consequences of forced migration and the closure of borders in western countries.

Coming out of the failed COP21, as governments continue to allow the Earth to burn, it is important that we continue to lift up the voices and solutions of women in communities most impacted by disastrous climate decisions and impacts.

The rise of the reactionary right and fundamentalism is not isolated to individual countries, but represents the global crisis of how capitalism fuels racial and gender violence.

We, the World March of Women, participatedin the actions of resistance against the extractive industry and the impunity that multinationals have. Among those, there are many Canadian companies grabbing natural resources, destroy life, expropriate communities and criminalize Human Rights and Earth defenders.

We highlight the big role played by women in all these struggles in many different countries of the world, from Honduras to the Philippines to the Democratic Republic of the Congo, resisting the mining companies and governments responsible for the murder and disappearance of many militants.

We salute our compañera Berta Cáceres, indigenous feminist who struggled against the construction of a mega-dam project in her country, Honduras. She was brutally murdered in March, along with several others since then.  Two of her daughters, Bertita and Laura, were here with us in the World Social Forum in Montreal to bring their mother’s voice. We speak up with them that our struggle will continue: “Berta did not die, she multiplied! Berta lives, the struggles continues!”

We, women from the World March of Women, will meet this October in Maputo, Mozambique to hold our 10th International Meeting of our movement. We will keep building our feminist alternatives and strengthening our feminist solidarity.

We will be on the march until all women are free!

The World March of Women

at the World Social Forum 2016 in Montreal.