Speech of Sissy Vovou* in the Summer University of Rosa Luxembourg Foundation in Belgrade,  3-10-2018

More than 150 participants from 90 countries, majority women, in the summer University of Rosa Luxemburg Foundation in Belgrade, 30-9 to 4-10 2018. Unfortunately due to many obligations I was unable to make a timely presentation of the whole event. Today I post my speech in the workshop “We want ourselves alive-Fighting violence against women”and very soon I will give a global picture of the very rich 6 day meeting, with many discussions and many events. Sissy Vovou 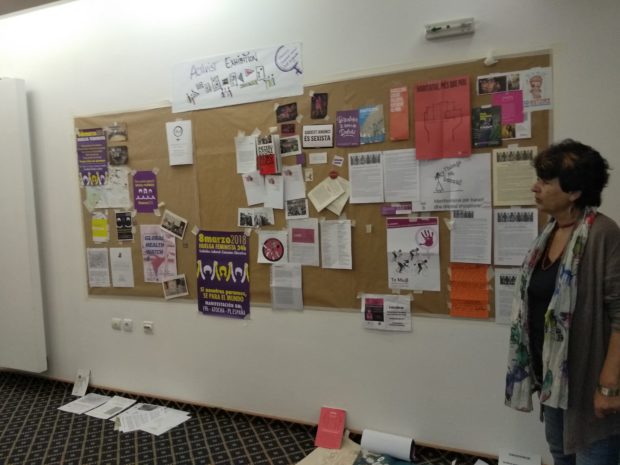 Signs, posters and announcements on the board in the entrance of the conference main hall

Mahatma Ghandi used to say that the utmost form of violence is poverty. We can accept this as a general statement, but being women you have another source of violence, which is diachronic, inter-class and global.

We use to say that violence undermines gender equality and women’s self-determination. And this happens because it is structural, in the patriarchal “norms” that permeat society and “arrange” the role models of the two sexes.
Of course many things change, and gender equality is now on the agenda of every international organisation. Yet, the process for the elimination of violence against women is very slow, and also assumes new dimensions, related to developments.

We see that in the present period of crisis of capitalism and increased militarism, many forms of violence resurge, increase, spread, including gender violence which maybe structural, but its forms and intensity follow the general developments in society.

Especially we see in the last few decades the resurgence of violence and gender violence connected to militarism and armed conflicts imperialistic, nationalistic or interstate, and is important to note this in a country like Yougslavia or Serbia, and we are confronted with the resurgence of forms of violence against women connected with migration and refugees, mostly in the form of trafficking for sexual exploitation. Trafficking is no new, the violence of prostitution is not new, yet in the recent period we have a resurgence of these phenomena. We have also witnessed in the last few decades the return of the so called traditional roles of women in many societies, in the form of dress codes or moral conduct of the women. We also see the broadening of genetic technology and of mother surrogacy, connected with profit. Thus, the commodification of women’s bodies finds new realms.

As an example, I can present some forms of gender violence in my country, Greece, for the years 2010-2017, produced recently by the police, on the basis of special records they are keeping. (These records are posted in the website of the Greek Police www.astynomia.gr. All in the Greek language, of course).

On the other hand, for the same period, we see a fall in reported rapes, for ages above 18, again despite social information that we have, which shows increase. In this registration, reported rapes in 2010 were 215, decreasing to fall to 141 in 2017. Almost all the victims of rape were women. Obviously minors are in other registration charts. And we know very many cases of minor girls or even boys, falling victims of rape very often, but not exclusively, by fathers or intimate partners of mother. Let’s not forget that reported rapes do not end up in court always, as the victims are terrified, bribed or both, or think of the consequences in their social environment. Those that end up in court are terribly traumatic for the victims or survivors, who need to pay lawyers, to undergo degrading questioning from the court, aggressions from the perpetrators’ lawyers, and very often the rape “is not proven”, the perpetrators-accused acquitted, so they end up traumatised manyfold. Here we should underline that the worst service in Greece diachronically but even more so in the situation of crisis, is the delay in bestowal of justice. From the time of the crime or reported crime until justice will give verdict in the second degree, the appeals court, usually there are 8-10 years. All those years are totally traumaic for the victims. And here we should add that often the police has important omissions in its research at the time of the crime, and also the courts more often than not are very lenient on the perpetrators-accused.

Considering femicide due to gender, the registration has 26 women assassinated in 2010, decreasing down to 9 in 2017. Most probably many of the general crimes against women are not registered accurately, as the sum total of women killed start from 33 in 2010 to decrease to 23 in 2017. Maybe some of the gender crimes are allocated to the general crimes. We shouldn’t forget here, that on many occasions a gender crime is characterised as “passion crime” or “family tragedy” sometimes by the police, and more usually by the media.

This chart concerning the numbers is most probably accurate, because death cannot be hidden, concealed or ignored. Concerning the causes though, as stated above, maybe it has important omissions.

Our organisation has long history to the solidarity to the survivors, in the trials for rape and trafficking, with sensitisation of the citizens and public manifestations inside or outside of the courts.

We also see in the last decades gender violence connected with women entering the public space and paid employment. The “Me too” movement which erupted in the last few years, reveals a small part of the sexual violence or abuse exercised to women at work, and brings to the surface centuries long undergrading of the women at work, be it a glamorous work or a humble work.
The right to work is undermined continuously through gender violence and abuse, and women very often had to quit their work or succumb to sexual apetites of the superiors of even the colleagues. Now, there is a thin light in this field, where accepting openings and abuse at work is no longer self-evident, despite mentalities that confuse abuse with flirt and gender relations.

We live in conditions of revolt of the women, which is the result of decades of work of the women’s and feminist movements.

So, we can say that there are contradicting developments concerning the area of violence against women, we have steps forward and steps back.
Steps forward is the resistance of women, in any form. Steps back is the return in the traditional roles, supported to a great extent by the extreme right or fascist movements or the movements inspired by religious intolerance. Sometime the return to the traditional roles is supported by women or even by feminists, tired from unemployment, from humble and tiring jobs for women.

The resurgence of the ultra right and the fascist right is the most important enemy of women’s rights and it is by no accident that women resist more vigorously these movements.

Now we live in the time of resistance, nothing is given, nothing is certain, the gains of the women in the 1950s and 1960s, and even before, are at stake.
So, in this summer school and in every feminist or womens’ rights gathering, we can talk about organising resistance and furthering gains.

The main area of gender violence remains, even today, the family. Femicide claims many women’s lives, in all areas of the world (small example we gave above) and in all classes. Laws are changing, but not very quickly and not very drastically. This is proven by the Istanbul Convention, which is a big step forward, but more radical laws are needed, and there is also a need for their application. And here we can state that Justice remains one of the bastions of patriarchy, with the well known double standards. So, even when fair laws are made, Justice does not often take decisions that will change reality and mentalities.
● One of the very important examples in the question of rape is its designation. What is rape? When the woman says no, or when the woman does not condede for a sexual act but is unable to express herself due to fear, freezing or other circumstances? In some national Penal Codes this development is already made. In others, in most, it has to wait for decades.
● Another example is self defense. When a woman resists a sexual assault, self defense may end up with serious wounding of the attacker or his death. Some laws in Europe in the last few decades have changed, accommodating the self-defense element when it exists, but mostly the women get severe punishments for resisting an attack. On the other side, the husband or partner ofren are confronted with mercy and understanding by the courts.

Here we must point out that often women kill their husbands after many years of violence, and the courts rarely accept this violence as a cause that led the women to homicide.

We find that solidarity to women who resisted violence is an important area of feminist activity, and in Greece currently we have four such cases, three resulting in homicide and the fourth to severe injury.

There are laws in the Penal Code providing for self defense, and sometimes they are used in court. For example, if someone comes with a weapon inside your house and you resist and kill him, this can be accepted by the court as lawful self defense. But nowhere can we find special understanding and provision for self defense for women who resisted violence in their own homes or in the public space when they were attacked. This must be one of our proposals for law change.

When the ratification of the Istanbul Convention was discussed in Greece, two proposals made by feminist organisations for law change, one for rape as described above and one for self defense, were not accepted. This means we need another 10 or 20 years until the next change in the Penal Code. Unfortunately.

What are the relations of trades unions or other social organisations with violence against women and women’s rights? What is the representation of women in the boards of every kind of organisations committed to social justice?

Unfortunately, traditionally the left has not paid much attention to women’s rights, as patriarchy and all the oppressions and discrimination in entails, are considered “secondary matters” as against the “primary antithesis” which is the class.

Very idicative that the left government of SYRIZA that was elected in Greece in 2015, with many hopes on all fields (which in the meantime have evaporated), had 14% women ministers and 25% women MP’s of the party. 60 feminist groups of the Spanish state wrote a letter to the new government in 2015, protesting the exclusion of women, but they got no answer. The feminist section of the party at the time was totally marginalised, because “we had more important matters to attend to, like the troika and the memoranda”. And here we can inform you that there is no facility for women’s organisations activities by any municipality or by government in Greece. No space, no money, no infrastructure. We have to do it all alone, collecting donations from women who are struck by the crisis.

My feminist group, tomov.gr, is not left or right, not connected to any political party,  is simply feminist, committed of course to social justice in all its forms. We carry many activities in the field of violence and any other. We have a very vivid webside, with four languages, with daily posts, which you can visit.

My conclusion is that only the independent feminist movement can elaborate policies, can carry out mobilisations like the ones in the last few years and can awake for women’s rights the sleeping left. Because we must not forget that this is a man’s world at all levels, and we are here to change it.

Sissy Vovou*  is a member of the feminist collective TO MOV (meaning the purple colour) and member of the editorial board of the website: tomov.gr