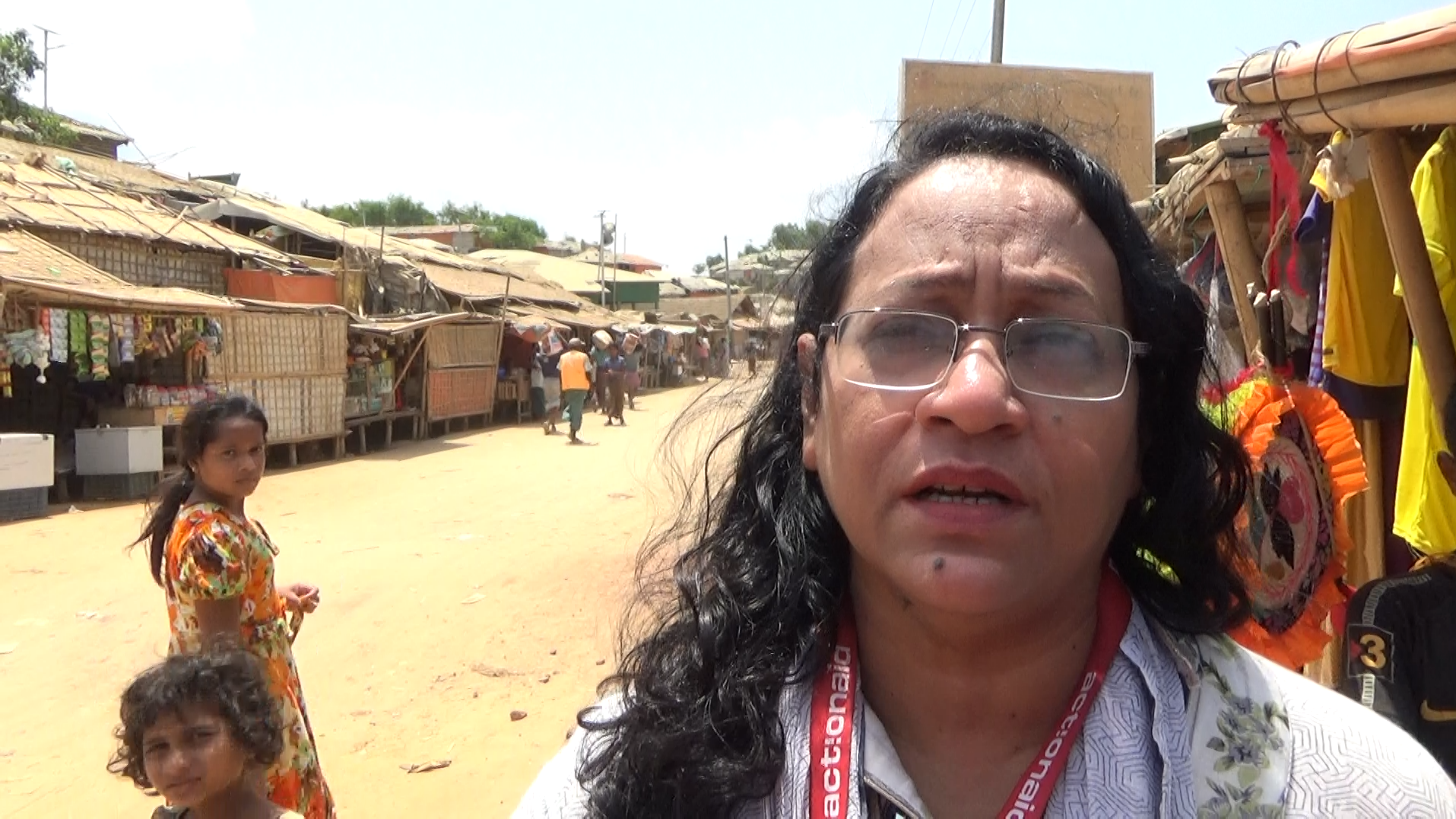 – Hello and thank you for speaking to our feminist organization The Purple (To Mov) from Greece. Please introduce yourself and tell us about the valuable work you are doing here.

– Thank you for giving me the opportunity. This is Shahnaj Parvin, I’m working as Protection Coordinator in ActionAid Bangladesh. More than 1 million Rohingya refugees fled from Myanmar to Bangladesh in August 2017. It was one of the largest influxes of refugees. ActionAid Bangladesh immediately responded by providing support in protection and site management. Regarding protection ActionAid provides a lot of support to women and girls in addressing gender-based violence, including sexual violence and domestic violence. Rohingya women and girls face less sexual violence now, but they still face a lot of domestic violence, and they mainly stay at home, they don’t go out, they have no work here. In general Rohingya is a very conservative and closed community and they don’t know about the modern life today and what is happening in the world. Even they don’t have any idea about family planning and contraception. They make a lot of children and they always believe that God will feed them. So there is a lot of poverty here.

– Do they know their rights or you also provide raise awareness programs for their rights? And also what is their legal status?

– Actually they have no idea about their rights because they are illiterate. They have never had an awareness program or even seen a television program. Now we provide them a lot of awareness sessions through interactive theater and our regular outreach work. We have created friendly spaces for women and girls and we raise awareness about the hygiene, family planning, and gender-based violence, including domestic violence and early marriage. But in Bangladesh they have no legal support. They are not declared as refugees, so they are not protected under international law. They are neither covered under Bangladeshi law. They even don’t have the citizenship of Myanmar; Myanmar doesn’t accept them. And they are not declared as refugees.

– And why they were forced to leave from Myanmar?

– Actually they have suffered, they have been tortured by Myanmar since long time ago, because Myanmar thinks that they are not their people, and they even exclude them from the education system. They came here without having any education opportunity before, and this is so painful for us too. Especially the girls are totally blocked in the house, they don’t go out. This is the reason they go to get married early. So actually they have no rights, no human rights. A lot of Rohingya people were tortured by the army of Myanmar, and they were forced to leave in order to save their lives.

– So they are also victims of sexual violence, rape?

– Yes, a lot in Myanmar, like during any conflict. After crossed the borders and reaching Bangladesh, the Bangladeshi government provided them safety, security and a lot of support. This was an achievement of Bangladesh, even though it is a poor country and has a lot of problems.

– How much is the population of the Rohingya refugees in the camps now? And what is the female percentage?

– It is more than 1 million, and the female percentage is high. They also give birth a lot, we had 60.000 newborns in the camp previous year. This is a huge population and I personally feel very pain because they have no future. They need a lot of support, technical education, income generating activities and lots of things so that they can survive. If they stay here in these camps in Bangladesh they need to be able to manage themselves and fulfil all their human rights. If they can have the chance to go back to Myanmar they need to be able to utilize their skills and expertise. ActionAid Bangladesh is working to support their better survival, and we need more support to be able to provide them more opportunities.

– So it’s very important that we also support ActionAid and also donate because we see here in the field from the first moment fast response from ActionAid and how you really address the needs of the refugee population here. So more is welcome. Thank you so much once again.