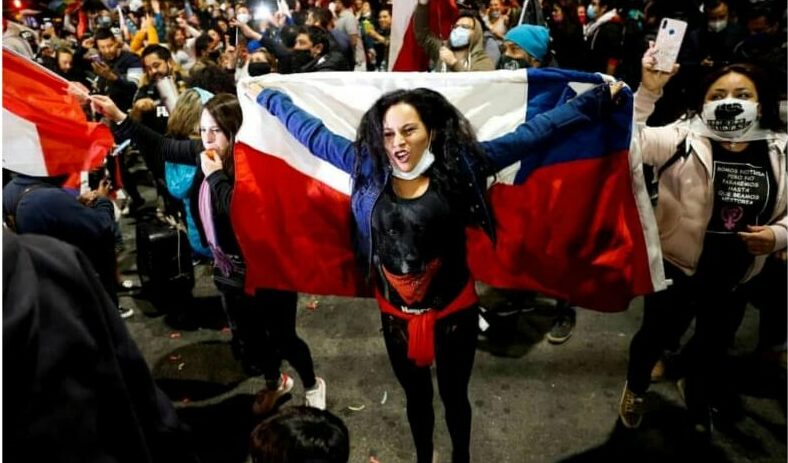 Women’s rights activists in Chile say that the country’s new constitution will catalyze progress for women in the country – and could set a new global standard for gender equality in politics.

In a two-day vote this weekend, Chileans will elect a 155-strong citizens’ assembly to write a new constitution for the country – the first anywhere in the world to be written by an equal number of men and women.

“It’s a game-changing moment, like when women won the right to vote,” said Antonia Orellana, 31, who is running as a candidate in the capital, Santiago.

A new constitution for Chile emerged during an anti-government uprising in October 2019, when calls for equality and fair access to health, pensions and education broadened to a demand for an overhaul of the entire political framework.

The current constitution – drawn up in 1980 during the Pinochet dictatorship and chiefly authored by a conservative Catholic lawyer, Jaime Guzmán – prioritizes a market-driven economy but has been broadly criticized for failing to adequately guarantee healthcare, education and pensions.

During the uprising, women were among the most fervent advocates of a constitutional rewrite to enshrine equal rights and greater public participation.

Although Chile’s current constitution guarantees equality or non-discrimination based on sex, it does not ensure women’s rights to equality in marriage and stipulates the protection of “life to be born” – a clause that has blighted access to legal, safe abortion in the country.

Orellana, a journalist and founding member of feminist political party Social Convergence, says her commitment to women’s rights was bolstered after experiencing a clandestine abortion over 10 years ago.

Rushed bleeding to the hospital, she miscarried before a doctor threatened to report her to the police.

At the time Chile had the strictest abortion laws in the world, prohibited in all circumstances. Eleven years on, progress has been slow, with abortion access only permitted in limited cases.

Orellana is campaigning for a constitution that will include diverse reproductive and sexual rights – “not only health rights considered under the male perspective,” she said.

Aleta Sprague, a legal analyst at the World Policy Analysis Center, said the assembly has “a lot of potential” for gender equality: the new constitution will be the first drafted in the wake of the global #MeToo movements and a wave of feminist activism across Latin America, which has led to protests against femicide and in favour of legal abortion across the region.

“At this moment, there’s a growing recognition of the full range of rights (necessary) to securing gender equality,” she said, citing women’s bodily autonomy and freedom from violence as examples.

Chileans voted by a 79% landslide majority in favor of a popularly elected citizen assembly with gender parity – as opposed to a mixed assembly of politicians and citizens without a regulated gender quota – during a referendum in October 2020.

For Orellana, the scale of support for parity demonstrates that gender equality is much more than a niche demand.

“Feminism in Chile is not just restricted to a single organization, but part of a wider public conversation,” she said. “It is flexible and is seen on many levels.”

US-based attorney and co-author of 2018 report A Women’s Guide to Constitution Making, Nanako Tamaru said Chile’s constitutional process is significantly distancing itself from traditional constitutional-making scenarios, when “the leading parties write a constitution that preserves the most power for themselves”.

“(Parity) is a big deal,” she said, citing examples of women’s participation in the recent drafting of Tunisia and Zimbabwe constitutions, in 2014 and 2013 respectively. “When we’ve seen more women and more diverse representation it addresses the broader issues around human rights, around justice.”

In Chile, feminist constitutional candidates stress that parity in the new constitution does not only benefit women, but any minority group that has been excluded from political spaces, including the country’s indigenous communities, LGBT groups and gender non-conforming people.

“It’s about parity of power rather than a binary interpretation of men or women,” said Amaya Alvez, 50, a law professor running as a candidate in Concepción.

Orellana acknowledged that not all women in the assembly will share feminist values, but she remains hopeful for change. She said: “It’s time to anchor feminism and use it to open up democracy.