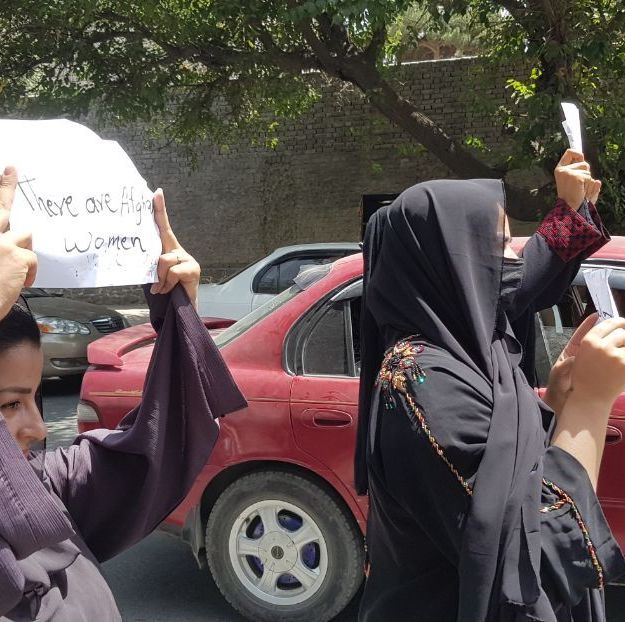 In Afghanistan, which for decades has been the stage of proxy wars, power was handed over to the misogynistic Taliban as a result of the dirty policies of the global hegemonic powers. This situation, which caused great rage and anger among women and the peoples in Afghanistan and all over the world, once again revealed the following truth: There is no power we can lean on other than self-power, self-organization and self-defence. What happened in Afghanistan yesterday exposed very clearly the hypocrisy of the Western states. The NATO powers have clearly shown that for them, values such as democracy, freedom and women’s rights were merely tools to find an excuse for their own dirty policies. Those who tried to legitimize their occupation with “women’s rights” 20 years ago now leave the lives of millions of women to the mercy of the Taliban.

Those who handed over Afghanistan to the Taliban today and those who occupied Afrin, Serêkaniyê, Girê Spî to the Turkish Republic yesterday are the same powers. Those who gave the green light to the Turkish invasion of Rojava and North East Syria yesterday, repeat the same scenario in Afghanistan today. From the perspective of the peoples, and especially of women, there is no great difference among those who are in power as a result of dirty deals.
By saying “We have nothing against the Taliban’s beliefs”, Erdoğan, the head of the fascist Turkish regime, himself admitted that they share the same mentality. In fact, the USA’s plan to hand over control of the airport of Kabul to the fascist Turkish Republic has to be understood within this frame.
The handover of the control of the airport to Erdoğan must be seen as a further step to strengthen Turkey, which runs their politics by way of gang organization. This is a great threat and danger to the peoples and especially to women.

Just as in Afrin, where the YPJ, which inspires women from all over the world, was founded, and where today women are subjugated and murdered as a result of the policies of the global hegemonic powers, also the women in Afghanistan face the same threat now. This is foreshadowed by the increase of violence against women in the past months and assassinations of pioneering women.

As the Kurdish people and women, we know very well that the only way to defend our existence and will against the imperialist and colonial policies of the global hegemonic powers is through organization. Without self-power, self-organization and self-defense, it will not be possible to build
and maintain a free life. Both as people and as movement, we have experienced and still experience this reality very heavily. The international plot against our leader Abdullah Öcalan on the 15th of February 1999 is the most concrete example for this. From the ISIS occupations in Rojava and Başûrê
(Southern/Iraqi) Kurdistan, especially in Shengal and Kobanê, to Turkey’s occupations here, the colonial and genocidal policies we face are based on the balance of the interests of global capitalism.

In the same way, the handing over of control over Afghanistan to the Taliban, the enemy of women and peoples, happened in the context of the geostrategic interests pursued by the Western states, especially the USA, in the Middle East and Central Asia. Once again, we see that for the powers in
question, the wishes, the will, the dreams, hopes and efforts of the peoples living in these lands do not matter at all. Because they do not only objectify those lands, which they only view from the colonizer-perspective, but also the people living in those lands. There is nothing that the holders of these 20-
years old policies won’t do in order to fulfil their own interests. That’s why searching for red lines, for any humanitarian or genuine in Western state policies is not even naivety, but ignorance. Those who claimed to fight the Taliban for their own interests and who have sacrificed the lives of 200,000
people, today make dirty deals with those same powers as if nothing happened.

During the years of occupation and the Taliban regime, those who fought and resisted the most for real democracy, freedom and a dignified life were women. In the most difficult period, under the most difficult circumstances, the women of Afghanistan found ways to organize. With the power and
support we give, and the solidarity and the defence we show as women, we have full faith that they will weave their resistance not only against Taliban but against all misogynistic powers and mentalities. From Kurdistan to Afghanistan, a free life and real democracy will be built under the
leadership of organized women. As women from Kurdistan, we stand with the Afghan women and peoples today just as we did yesterday. We call upon all women, especially upon the women in the Middle East, to stand in solidarity with our sisters in Afghanistan, to raise their voices, and to defend
their lives, achievements and dreams. Let’s enhance our women’s alliances against these patriarchal, misogynistic powers!