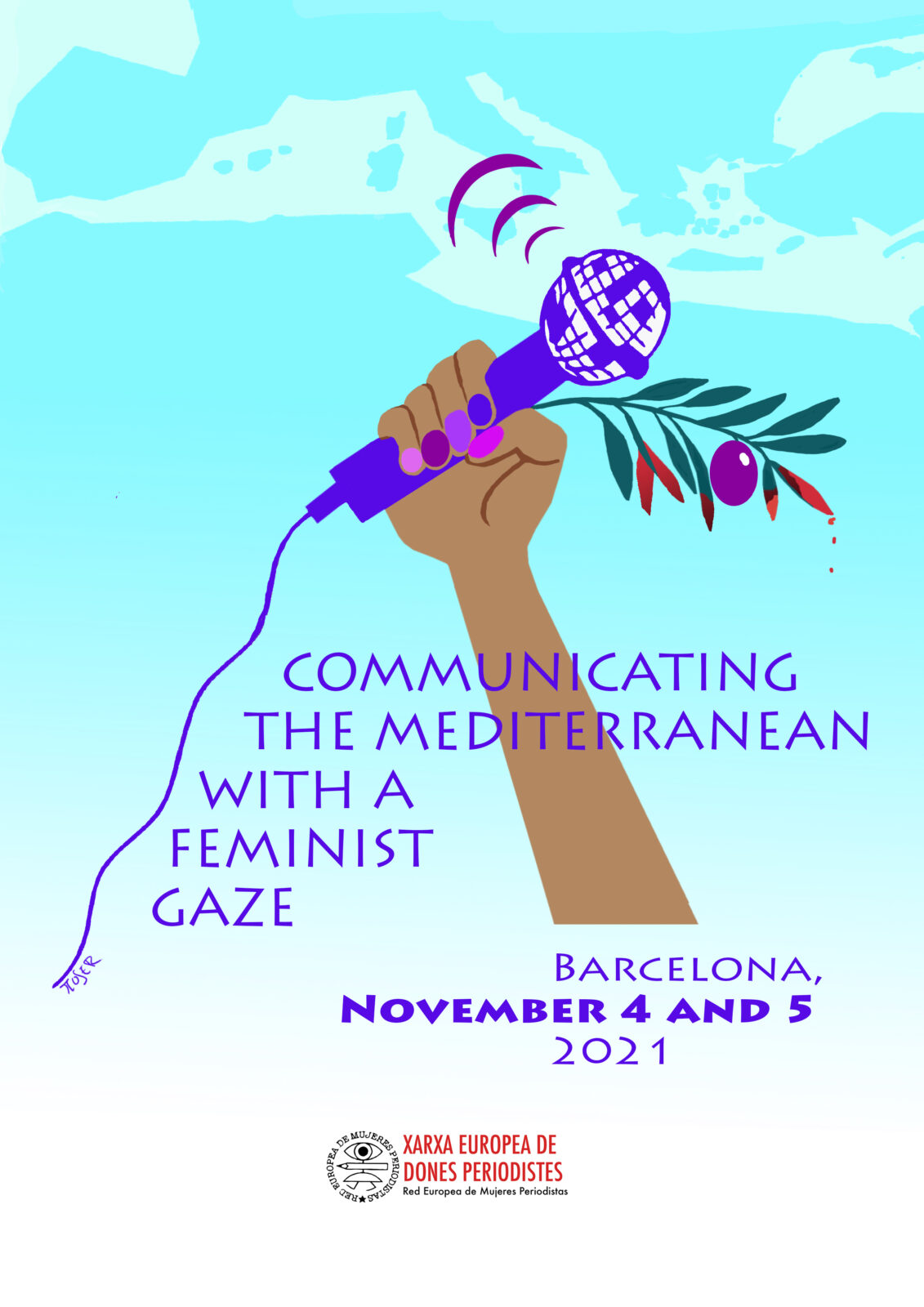 A very well organised conference in Barcelona, 4 and 5 of November, with dozens of contributions from women journalists and/or activist journalists (like the undersigned), from Barcelona and many parts of the Mediterranean. They gave a strong picture of the conditions of women journalists but also the situation in each country or periphery, and most of all it was obvious that the feminist movement and the demands of women for equality and social justice are embracing broader audiences and are in the centre of the discourse in many societies.

The undersigned, coming from Greece, had undertaken the presentation of the latest ecological and climate problems in this soutnern edge of the Mediterranean. The agenda 2030 that was at the heart of the conference, has as one of its very important goals the protection of the environment.

Soon we are going to post other contributions in this conference, when they arrive in our website, tomov.gr. 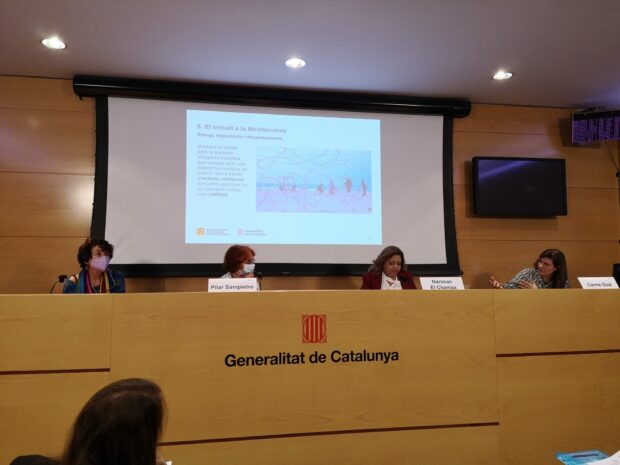 Photo description for persons with visual disability: A panel in the conference, with four women sitting and behind a board for power point show.

Ecological problems and peoples’ movements in Greece for the last few years
Sissy Dionysia Vovou
Feminist activist, member of the editorial board and journalist in the feminist website tomov.gr.

We are speaking these days about global warming, environmental destruction, renewable forms of energy, on the occasion of the Glasgow international official conference on climate. We are also speaking about resistances to the commodification of the climate crisis, the entrance of the people, the movements, in the realm of the environmental crisis. And, of course, about the presence of women journalists and women activists who have a pioneering role in the proposals of solutions, often at very dear and personal cost.

In my contribution, I would like to highlight some elements from a small country in the end of Europe, which has its own small history of environmental problems followed by capitalistic non-solutions.

In Greece, there is a combination of many aspects of the environmental crisis, since it suffers from acute weather phenomena, with drought, fires and floods, which were the worst during the last year. It is in the “green transition” in the worst possible capitalistic way. It is “fighting” with the neighbouring country of the Mediterranean, Turkey, for the discovery of the “black gold” and gas, and is bying great weapon systems (only recently the agreement with France for the purchase of 18 Rafalle war planes) in order to “confront” the enemy. We also have many earthquakes, which are not due to the environmental demise of course, up to now, but they contribute to destruction of local societies. One of the big deals for the green transition, are the windturbines, which are placed every and anywhere. The ever more uncontrolled installation of REU (Reneable Energy Units) inside forests, virgin ecosystems, in NATURA protected areas, on shores, islands and Islets, within archaeological sites and landscape of unique natural beauty, causes an unprecedented destruction but also the occupation of public land, which  is surrendered for free to big undertakers and phantom companies. The same model is followed for the photovoltaic which started spreading on agricultural land, but also to public forest lands and pastures, covering thousands of acres. 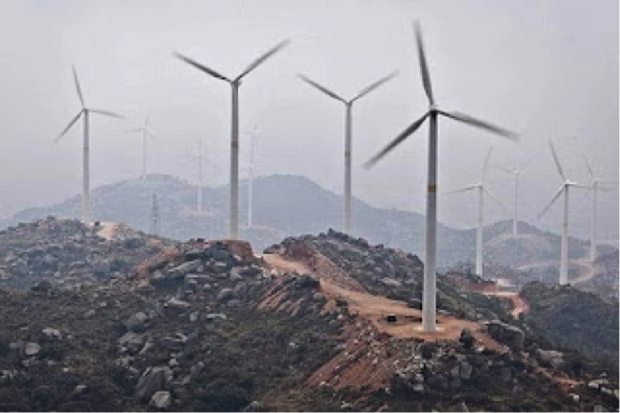 Photo description for persons with visual disability: Wind turbines scattered on mountaintops at very short distances, like an odd forest. 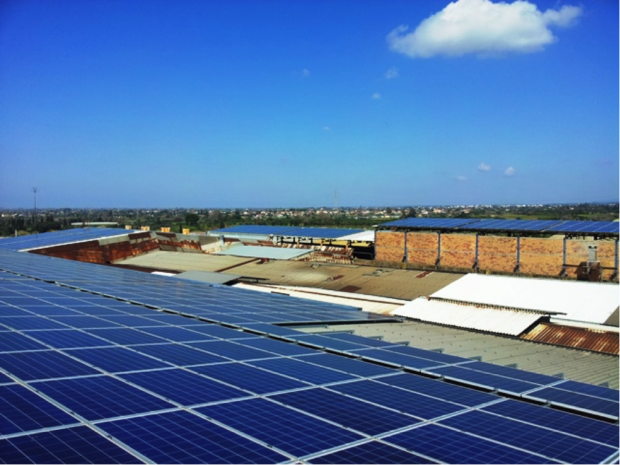 As a result of all these, there is a strong wave or reaction, in the whole continental country and the islands. Cities and villages, holiday or recreation resorts are undermined, productive activities like agriculture, livestock work, apiculture, tourism, are threatened with disappearance. In most of the studies for environmental inpact, many objections are registered.

All experience up to now, shows that it is not enough to have renewable sources of energy in order to safeguard whether their use will be mild or not. There are crucial factors like the size, technology, spaces for installation, energy planning and the system in which they are integrated.

The ecological brochures of the last few decades wrote that the renewable sources, sun, wind, water flowing, are everywhere, in every state, in every place. Democracy, decentralisation, combatting of energy poverty are the advantages for their use. The access of local societies, of local government, of co-operatives, of groups of consumers, even of self-producers of REU, would give the possibility to smaller social entities to gain democratic control, independence or even power autonomy. Photo description for persons with visual disability: A giant Rock in Epirus, with a banner reading NO OIL

In the mountain area of Epirus, there have been drills for the discovery of hydrocarbons, including in some natura areas, against the will of the local popuation, or what remains of it, since most young people leave for the cities, a trend that will most probably be accelerated after the demise of the mountaineous environment and the agrucultural, livestock and touristic activities. And even the method of fracking will be probably used, it is not excluded in the contracts, which apart from other destructions will cause earthquaqes and landslides as has happened in other areas where this method has been used. Due to the recent developments concerning the gas prices, the project is at a standstill for the moment. A massive and strong movement of citizens fought for the last few years, now we know that one of the companies left, but the project is not abandoned, so the people are vigilant, and very worried, since these plans were supported by both right wing and left wing governments. 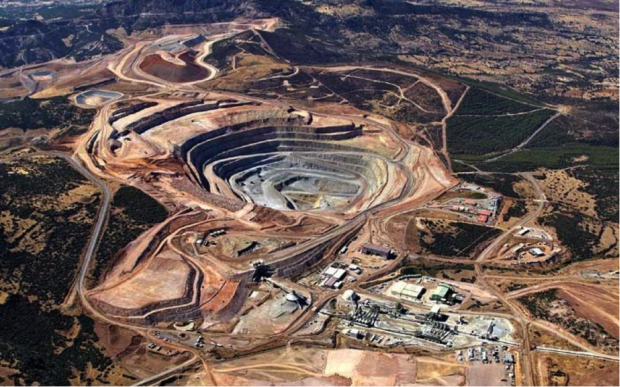 Photo description for persons with visual disability: Devastated mountain tops In Chalkidiki, due to works of the Gold extraction.

A giant project in Chalkidiki area of Northern Greece, for the extraction of gold by the Company Greek Gold (Ελληνικός Χρυσός). There have been long term massive fights of the local population, embraced by environmental movements from all over Greece for the cancellation of the project, because it will cause, and has already caused, extended environmental pollution on the land as well as in surface and deep waters. Unfortunately, the project is continuing despite some delay caused by the movement and long judicial struggles. There were many arrests of fighting local activists, many court cases, strong terrorization of the protesters for years. Legal struggles are continuing, and it is characteristic that the company has lost some court cases and they have been convicted for pollution in recent years. The case reopened the last few days, as there is a court case against a woman journalist called Stavroula Poulimeni, of Thessaloniki electronic alternative newspaper, ALTERTHESS. She is accused of writing in the electronic medium the names of the company people who are already convicted, and the plaintiff demands compensation of 100.000 euro, or if the journalist cannot pay it, she should go to jail for one year. Worth noting that very little is written against the harmful impact of the company’s activities for the extraction of gold, perhaps because the company pays commercials to many newspapers and R/Tv. Here we must say again that, unfortunately, all recent governments, right and left, allowed the Investment and gave way to the company that made it. 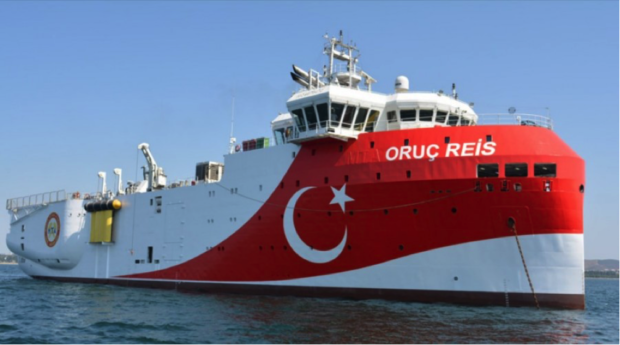 Photo description for persons with visual disability: A ship called ORUC REIS, which carries drills for the discovery of oil and gas

The most important environmental destruction is foreseen in the Aegean sea, where field research is taking place with boats that carry out drills for the discovery of gas and oil. And here we have the big antagonism of the two states, Greece and Turkey, which causes daily nationalistic discourse and poisoning of the peoples. In the end of 2020 the Greek Parliament voted in favour of the field research, with two parties expressing reluctance on the grounds that it is not carried out by state companies, while only one party (MERA 25) voted against based on the principle of environmental protection and with the call for the green transition. Photo description for persons with visual disability: A huge area where gatbage is laid in the open air, with many vehicles emptying garbage.

The use of any kind of waste is another area of environmental destruction in Greece. Most of the waste, about 90%, are either burned or buried in the earth in certain spaces, and there are no plans and installations for ecological treatment of any waste, for recycle, reuse and limitation of the production of waste. There was a National Plan for the treatment of waste in the end of 2020, which was published, but according to analyses from ecological organisations, the only result of this Plan is the enhancement of the burning of waste rather than recycling and reusing. 80% of the European funding for investment in the field of waste use, is led to investment to the burning, and the creation of dozens of units for the treatment of waste. Only 20% will be directed to projects and actions for prevention of the production of waste, of reuse, compost, recycling. According to another study, about 90% will be buried or thrown uncontrollably and only a 5% will be led to recycling. 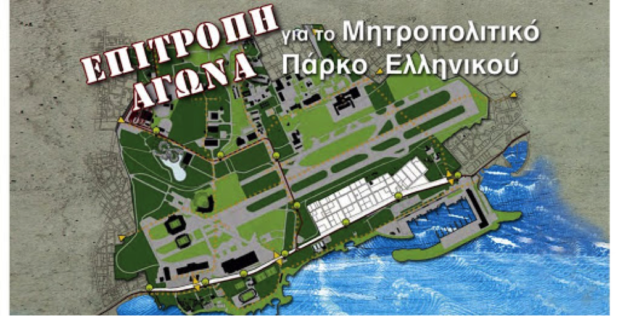 A large new city is planned in the broader Athens area, the old and abandoned for two decades airport called Ellinikon, where there is a big project for the “development” of this huge area, of 6.000 acres, so called Metropolitan Pole. One side touching the sea, is the bigger urban “development” plan in Europe today, and a huge destructive urbanization.
On the contrary, the plan of the proggressive movement was and still is the creation of an open area for the people, a forest within the broader area of the capital of 5 million people (The area is located 8 klms south west of Athens which has very little green), with sports installations and recreation activities. Also and very important the safety of the existing archaeological treasures.
The state’s plan is for an inward looking city of 35.000 inhabitants, offices, multi storey and huge buildings, 6 skyscrapers that can be seen even from the Akropolis, all kind of uses, and of course a casino. The height of the buildings will be up to 50 and 70 metres, and in some cases they will reach even 115 m. from the sea. 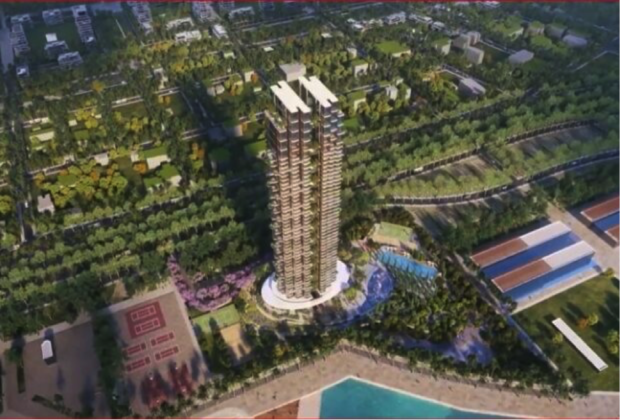 Photo description for persons with visual disability: A picture given by the company which has undertaken the project, showing an area of Green and beauty, and in the middle of it a huge skyscraper

There was a big fight against this kind of “development” unfortunately with little success, this fight managed to curb some of the projected plans, but the heart of the project remains. And all this “development” area is donated by the Greek state to a private company called Lamda Development, which has hardly given any money. The Greek state gives away all this precious land, and the parties in government, both right and left, carry it out.

Speaking about women journalists focussing in particular about climate and environment protection, we can see that the only women focussing in environmental protection are the activists, as in Greece we may not have a strong environmental movement, but we have innumerable small and larger initiatives working in local areas where these threats existed and still exist. These activists are at the forefront of the information of the public about these dangers, on many occasions with scientific analyses, and their presence is crucial for these movements. And the few women journalists working in progressive media that highlight these antisocial and antienvironmental activities, are often punished or led to courts. 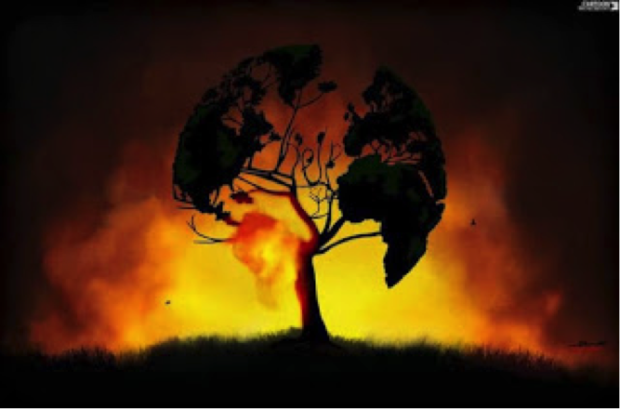 Photo description for persons with visual disability: The planet is like a burning tree.

I thank my friends ecological activists who contributed to my presentation with information and analysis used for my contribution, ms. Despoina Spanoudi, ms. Kyriaki Klokiti and mr. Ioannis Papadimitriou.