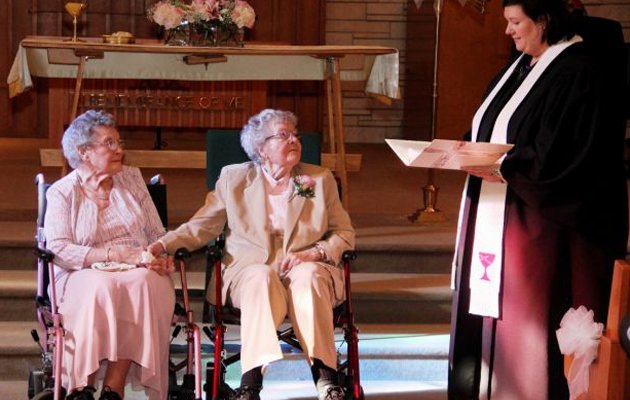 Ninety-year-old gay couple marries in Iowa after 72 years together
Vivian Boyack and Alice ‘Nonie’ Dubes, 91 and 90, met in hometown of Yale, Iowa, while growing up

More than seven decades after beginning their relationship, Vivian Boyack and Alice “Nonie” Dubes got married.

Boyack, 91, and Dubes, 90, sat next to each other during Saturday’s ceremony, the Quad City Times reports.

“This is a celebration of something that should have happened a very long time ago,” the Rev Linda Hunsaker told the small group of close friends and family who attended.

The women met in their hometown of Yale, Iowa, while growing up. Then they moved to Davenport in 1947 where Boyack taught school and Dubes did payroll work.

Dubes said the two have enjoyed their life together and over the years they have traveled to all 50 states, all the provinces of Canada, and to England twice.

Boyack said it takes a lot of love and work to keep a relationship going for 72 years.

Longtime friend Jerry Yeast, 73, said he got to know the couple when he worked in their yard as a teenager.

“I’ve known these two women all my life, and I can tell you, they are special,” Yeast said.

Iowa began allowing gay marriage in 2009. The two women say it is never too late for a new chapter in life.