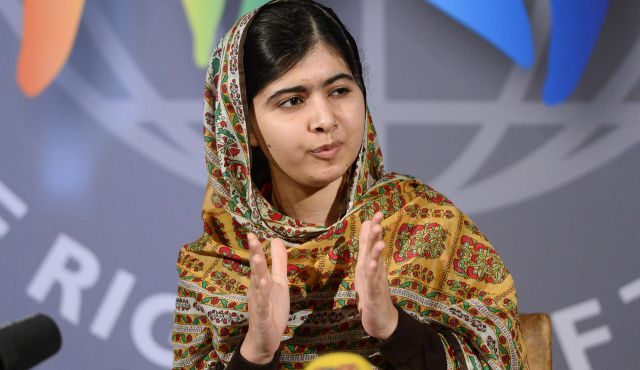 Pakistani teen who won Nobel Peace Prize for education advocacy donates entire sum of World’s Children’s Prize to UNRWA schools damaged during summer’s Gaza war.
Malala Yousafzai, the 17-year-old Pakistani girl who was shot in the head by a Taliban gunman for speaking out for girls’ right to education, has announced that she is donating the $50,000 she received for winning the World’s Children’s Prize to rebuild UN schools damaged during the summer’s fighting in Gaza.

She said the money would go the United Nations United Nations Relief and Works Agency for Palestine Refugees, to help rebuild 65 schools damaged during the 50-day war between Israel and Hamas.

“Innocent Palestinian children have suffered terribly and for too long,” said Yousafzai, who won this year’s Nobel Peace Prize for her advocacy efforts in Pakistan. “We must all work to ensure Palestinian boys and girls, and all children everywhere, receive a quality education in a safe environment. Because without education, there will never be peace. Let us stand together for peace and education because together we are more powerful.

Pierre Krahenbuhl, the commissioner general of UNRWA, said the recognition of someone who has “campaigned so valiantly for the essential right of a child to receive an education” will lift the spirits of the 250,000 Gazans who attend the UNRWA schools and the 9,000 people who teach there.

UNRWA shares with you the profound belief in the importance of education as a means to lift young girls and boys out of isolation, exclusion or oppression,” said Krahenbuhl. “Acquiring skills and knowledge to improve prospects for the future is profoundly engrained in the Palestinian consciousness.”