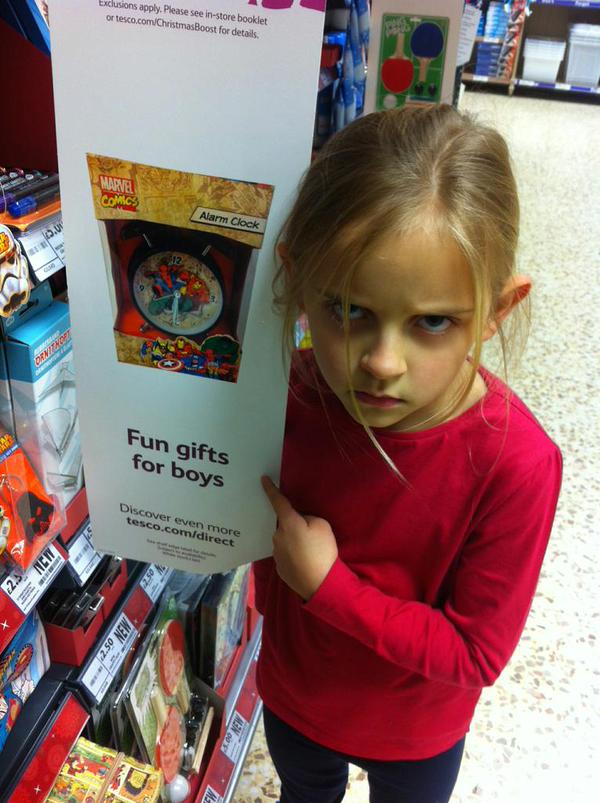 When Karen Cole tweeted a photo of her seven-year-old daughter Maggie holding up a Tesco advertisement, people took notice.

The powerful photo shows Maggie at the Tower Park branch of Tesco in Poole, Dorset, angrily holding a superhero alarm clock ad with the caption “Fun gifts for boys.”

“My superhero loving 7yo daughter not impressed when she spotted this sign in @Tesco today @LetToysBeToys,” reads the caption of Cole’s tweet.

The photo was tweeted at Tesco and LetToysBeToys, a social media campaign that aims to stop advertisers from gendering toys, and sends the message that boys and girls should be comfortable playing with whatever toys they like.

Since being posted earlier this week, Cole’s photo has been retweeted over 10,000 times, and even reached Tesco whose spokesman apologized saying, “The sign has been removed and we’re sorry if it caused any confusion.”

Cole told BBC News she had explained to her three children that “all toys were for all people.”

“When she [Maggie] saw the sign I think she was cross because it was saying the opposite of what I had told her,” Cole told BBC.