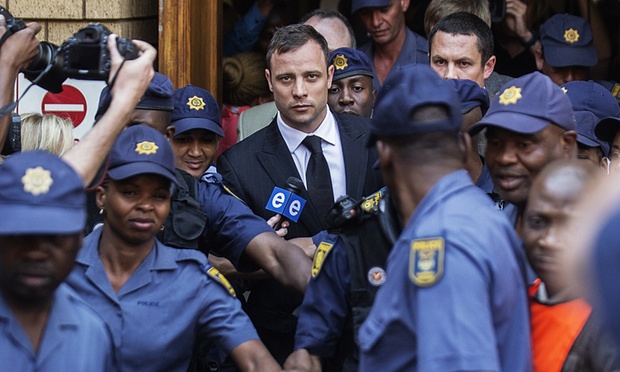 “Oh, how fast five years passes in South Africa … feels like 10 months,” one Twitter user wrote in response to the news of Oscar Pistorius’s imminent release. It was a response which summed up the prevailing public sentiment in the country: resignation, cynicism, and a touch of dark humour.

For blood-fatigued South Africans, the realisation that it is possible to pump four bullets into an unarmed young woman and yet spend less than a year in prison will be further evidence that violent crime is not taken seriously enough in a country ridden with it.

In situations like these, allegations of corruption often fly. But Pistorius’s parole, 10 months into a five-year sentence, is procedurally above-board. South African law provides for an offender to be released into house arrest after serving one-sixth of his or her jail term, provided the original sentence did not exceed five years.

If Pistorius had been convicted of murder, there would be no chance of an August release: his minimum sentence would have been 15 years. There is no prescribed minimum sentence for the crime Judge Thokozile Masipa chose to convict him of instead – culpable homicide. It isn’t over for Pistorius in this regard yet. The state’s appeal against his murder acquittal begins in November, and if it succeeds the athlete could be sent back to prison after just a few months outside.

Though Pistorius’s August release may be well within the prescripts of the law, it will not escape the attention of his compatriots that the treatment meted out to the athlete has not been typical.

Pistorius’ entire experience with the South African criminal justice system is taken as emblematic of what it means to be rich and white, as opposed to black and poor. At any given time, a third of prisoners in South African jails are awaiting trial. The longest-duration remand prisoner in the country, Victor Nkomo, was released earlier this year after waiting eight years for the completion of his trial.

By contrast, Pistorius managed to be arrested, bailed, stand trial and complete time behind bars within two-and-a-half years. Pistorius took a life; Nkomo was accused of armed robbery.

The parents of Pistorius’s victim Reeva Steenkamp told his parole board in a letter that they did not consider 10 months’ imprisonment to constitute sufficient punishment for extinguishing their daughter’s life. The Steenkamps have since expressed disappointment at the fact that the athlete will be released notwithstanding their concerns.

Again, though, this is permissible. Following an amendment to South Africa’s Criminal Procedure Act in 2003, relatives of the victim have the right to make submissions to the relevant parole board in cases of serious crime. Their view on whether the offender be granted parole, however, is just one of a number of factors taken into account.

In Pistorius’s case, the parole board at his prison would have considered aspects like whether the athlete was likely to re-offend and whether he posed any kind of danger to the community. We know from South African prisons boss Zach Modise that Pistorius has also completed a number of rehabilitation programmes while incarcerated, which the parole board would have added to the balance sheet.

Judging by the tenor of responses on talk radio and social media, these details are virtually meaningless to many South Africans, who simply see a famous man who killed his girlfriend walking free in what seems like the blink of an eye.

When Pistorius’s lawyer Rohan Kruger told a newspaper last month that the athlete hoped to work with children upon leaving jail, his words were met with derision. Release from prison may be imminent, but rehabilitation in the public’s eye seems a distant dream for Oscar Pistorius.