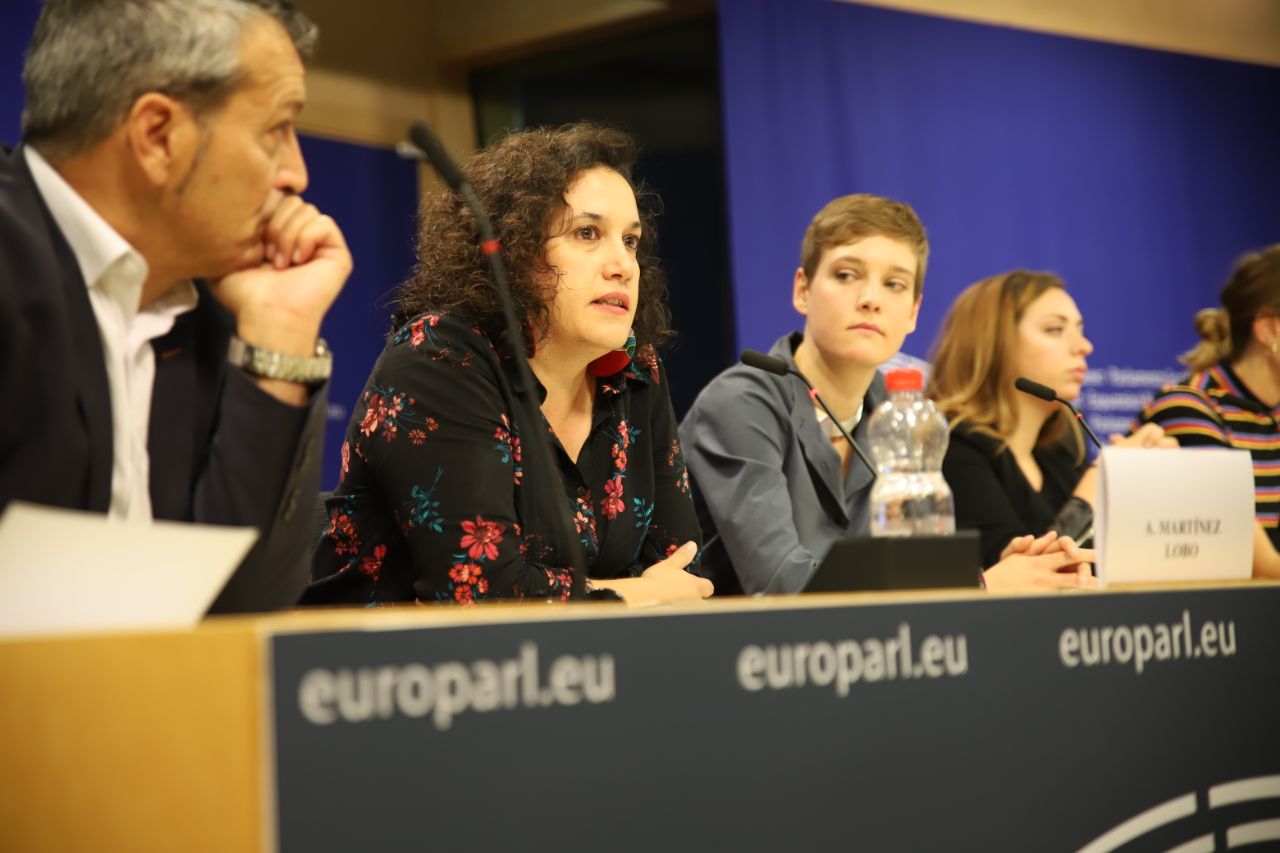 *Interview with Amelia Martinez Lobo, member of the MeTooEP, Parliamentary Assistant for PODEMOS

“What we need is to transform reality, to make the society and therefore institutions like the EP a safe place for women. We do not believe in merely imposing sanctions, our constant demand should be re-education through gender mainstreaming”. This was the concluding remark of Amelia Martinez Lobo, member of the MeTooEP movement, that was launched on the 8th of March 2018 at the European Parliament (EP) in Brussels. A few months earlier, on 26th of October 2017, the EP voted a Resolution on combatting sexual harassment and abuse in the EU. The launching of the MeTooEP initiative required just a few months of self-organizing among the parliamentary workers from various political colors and a demonstration inside the premises of the EP, that has resulted in the collection of more than 1000 signatures of support and a clear demand to fully implement the 2017 EP Resolution.

“There is almost no progress at all, still a lot to do for the proper implementation of the resolution. We, as a movement do not want to substitute the work of the official bodies, our job is to push them to act, but mainly to support the victims, show our solidarity.  We also offer them advice on how to move forward with their complaints either towards the respective EP committees or with the police. We want to address the lack of protection for the victims and we are trying to collaborate together with the official bodies so that we bring about the improvements needed” stated Ms Martinez Lobo, “our role is to help break the culture of silence” she emphasized.

The movement was born after one parliamentary assistant who has been noting down in her personal notebook various harassment and assault experiences confessed to her by her colleagues decided, prompted by the Hollywood scandals, to make it public. Many parliamentary assistants, trainees and staff members have joined in, one male included. The main tool of the movement is its blog -metooep.com -where anonymous testimonies of victims of harassment and assaults are being collected.

Blog post 11.10.2018: “I received a text from a Member of the European Parliament with whom I was working on a file last April. The message read; “I am interested in further cooperation with you”. It was 2AM”

Regarding the system of complaint within the EP, there are currently two committees, one is the Accredited Parliamentary Assistant/APA committee, responsible for dealing with complaints than involve MEPS. It has received for the moment 11 complaints, all on psychological harassment. Financial sanctions regarding the daily allowance have been imposed to only one MEP, no sanctions though concerning salary or parliamentary life participation. Sanctions ofcourse mean something only if they are proportionate and can act as a deterrent. To make it even more complex and bureaucratic, the committee makes a recommendation but it is the President of the EP Antonio Tajani, who decides if it will be implemented or not.

“The second, the Staff committee is not transparent. We only know of one sexual assault complaint filed in October 2017 and one year after, there is still no resolution on it. There is not even a clear protocol with information about rights and obligations, no timetable, no formal written guidelines, the victim is not informed and this is another of our requests. In this case, it is the Secretary General Klaus Welle the one to decide on the implementation of any committee recommendation. The fact that we only know of one complaint does not mean that we do not have many cases but that the victims do not trust the system. They do not feel comfortable or even know where to go, it’s a mess” said Ms. Lobo, “after all, the reality of the harassment and assaults cases at the EP is more than apparent in our blog. This is a struggle against male power not against male sexuality; 98% of the victims are women and quite a few are men but the perpetrators are always men. Men against women, men against men”.

How did the EP authorities react to the movement ?

“We have targeted the Quaestors and the Vice Presidents  – all members of the EP bureau –   in charge of the roadmap on the implementation of the 2017 Resolution. Some never replied while others did accept to meet with us, without any enthusiasm. We have also met the Ombudswoman who in turn was very supportive”. It seems that the EP has lately put in place some “make up measures”, a pilot project for a voluntary training and the appointment of Counselors as links of trust between victims and the institution. “In reality, these do not comply with the Resolution,” remarks Ms Lobo.

The demands of the MeTooEP are clear: -External independent evaluation on how the institutions are working for the protection of the victims – Mandatory training for all, MEPs including -One unique committee to deal with sexual harassment, composed by independent experts, without the participation of MEPs and with a simplified and efficient process

And what do the victims ask for?

“What they always ask for. Truth – Justice – Reparation – Non repetition”.

The MeTooEP is slowly gaining momentum and according to the PODEMOS representative, it is a feminist movement standing further away from the neoliberal narrative on women’s rights. “Our fight is a feminist struggle, a fight to show that even if intimidation and targeting of the woman’ s body is common behavior, it is not a normal behavior. The patterns are difficult to break even within the Left. Bringing more women into leadership positions is a step, a useful tool but it will not ensure a rupture in the patriarchal stereotypes unless it is based on pure feminism. Women can also reproduce patriarchal behaviors, we should watch out for the right wing, neoliberal -feminism-, we are more radical that”.

Abuse is so often when there is a relation of power, this is why it is widespread also in the EP. “Immunity of the MEPs cannot mean impunity. I believe that we should further collaborate with similar movements. We are privileged white women working in institutions. There are women – black, migrant, domestic workers, disadvantaged- with a life much more difficult than ours, we always have to work in perspective.  Our fight here is concrete and bureaucratic. We should further connect with movements in Brussels and push national and regional Parliaments towards the prompt set up of reporting mechanisms for the victims that in Spain for instance do not exist”.

Although highly positive as an initiative, it will require increased level of courage and determination and most of all, an integrated approach towards mainstreaming feminism. Addressing the individual perpetrators will not make the problem go away, the problem is deep and structural. It remains to be seen whether the MeTooEP will manage to break the long-lasting patriarchal stereotypes and bring MEPs and staff to face the consequences of their actions. What else would make sense, if not the demand to uphold the totality of women’s rights, all at the same time, straight against male dominance and abuse of power.