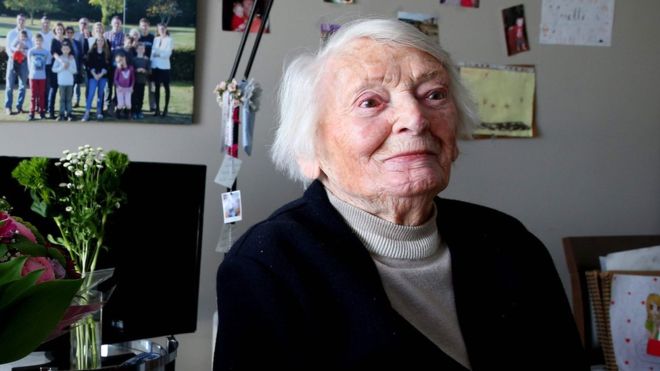 Yvette Lundy, a well-known member of the French Resistance and a Nazi concentration camp survivor, has died at the age of 103. Authorities said she died on Sunday in the northern French town of Epernay.

In 2017, she was made a Grand Officer of the Legion of Honour, one of the highest civilian decorations in France. She also inspired a character in the 2009 French film Korkoro, which follows a Gypsy family under threat from the Nazis.

Ms Lundy was remembered on Sunday for her work as a member of a resistance network known as the Possum Escape Line.

Starting in 1940, she supplied fake papers to people who were then hidden at her brother’s farm. She was arrested in June 1944, when she was 28, and taken to the Ravensbruck concentration camp in Germany.

Ms Lundy spoke frankly about the dehumanisation she suffered there from the outset, when she was forced to strip in front of SS officers. “The body is naked and the brain is suddenly in tatters. You’re like a hole, a hole full of emptiness, and if you look around it’s more emptiness,” she said.

The former school teacher was later transferred to Buchenwald concentration camp, which was liberated in April 1945. She remained silent about her experiences for almost 15 years. But in 1959, Ms Lundy began sharing her testimony with French and German students, promoting a message of reconciliation.

“Still today, I think of the camp at one point each day… often at night before I fall asleep,” she told AFP news agency in 2017.

Mayor of Epernay Franck Leroy paid tribute to Ms Lundy on social media on Sunday, calling her “an example for all of us.” She “represented the honour of France during the darkest hours of our history,” he wrote.

Eric Girardin, a deputy in the French National Assembly, tweeted that he “learned with sadness of the passing of Yvette Lundy, great lady of the Resistance.”