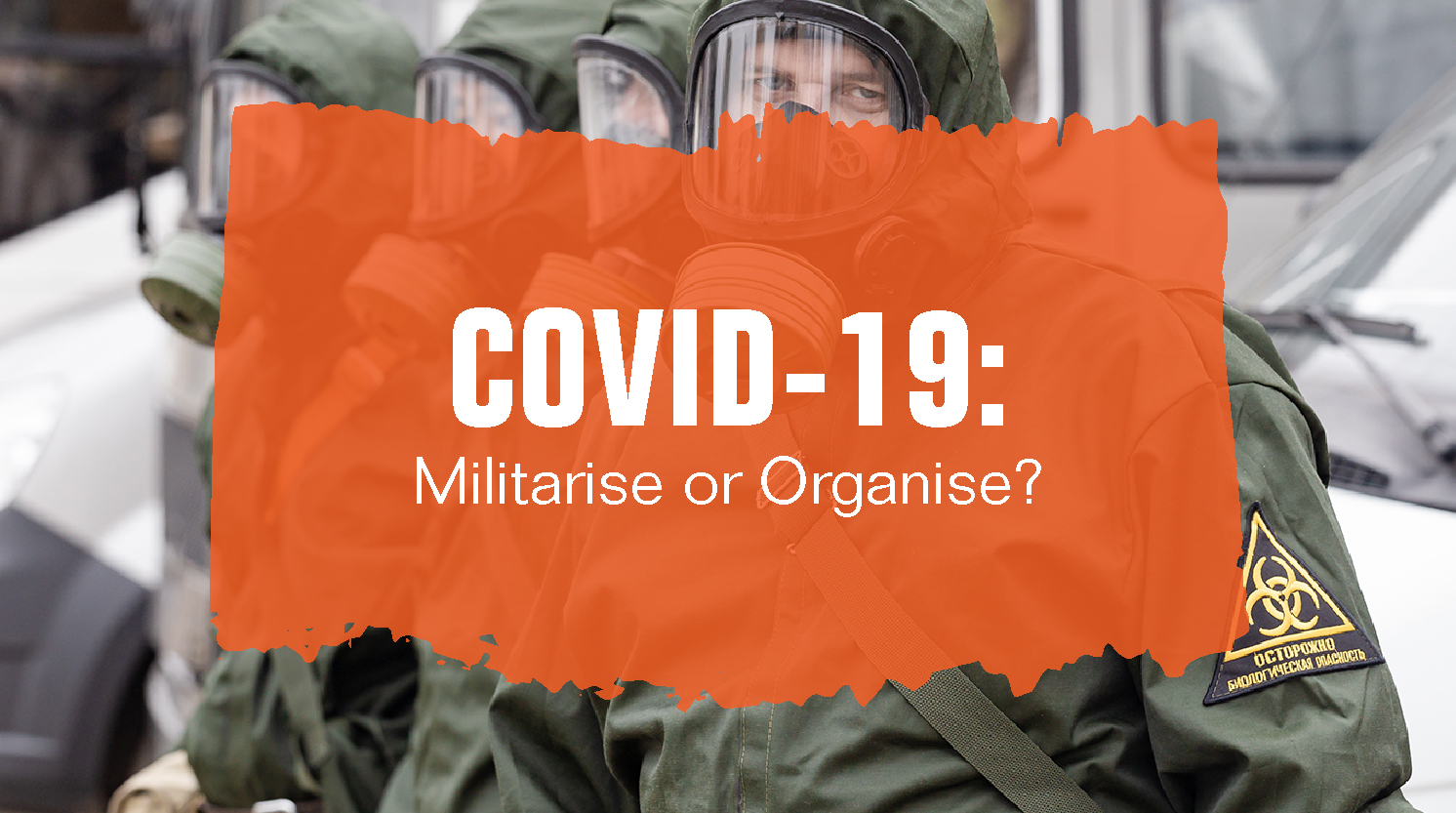 By Ray Acheson, from Women’s International League for Peace and Freedom

In the last week as cities around the world have entered into lockdown, and as fear of the many uncertainties associated with our latest global crisis mount, some people have turned to what they have been told by their leaders always brings security and solutions to crisis and fear: guns.

Looking for safety through violence

In the United States and Canada, people are buying guns and ammunition in record numbers. Some governments are exacerbating this by increasingly using militarised language in a poor attempt to try to calm people, choosing the wrong analogy for what we collectively need to do in these perilous times. “Waging a war against an invisible enemy;” “we will defeat;” and “patriotic duty” are some of the phrases we have heard used by governments around the world.

But militarism is one of the things that got us into the situation. Not to the virus itself, but to the unconscionable amount of money that is spent on weapons globally—money which is now not available for things we actually need.

Collectively, governments around the world are investing nearly two trillion dollars a year on militarism at the expense of public health infrastructure and research and every other aspect of social wellbeing.

In 2018, US military spending reached $649 billion—more than the next top eight spenders combined. And that figure does not include nuclear weapons. The cost of maintaining and expanding nuclear forces in the nine nuclear-armed states is budgeted to run into billions—and in the US case, one trillion—dollars over the coming decades. Even those countries that do not have a nuclear arsenal or those that do have decent social systems and health care, such as some of those in Europe and Canada, have spent increasing amounts of money militarising their borders and manufacturing weapons for export.

Equipped to fight wars, not pandemics

We are a world equipped to fight wars, not pandemics. The militarised systems designed to keep people from crossing borders cannot keep a virus from doing so. The nuclear bombs that we are told are meant to “deter” adversaries will have no effect on deterring diseases.

But having invested so much for so long, financially and intellectually, in militarised security, we now face the situation where militarism becomes the answer to every perceived or actual threat. In Serbia, for example, the government has enforced curfew hours and deployed its fully equipped army to the streets to maintain order, although there is nothing that indicates that regular police forces could not do the job. The army is further tasked with “protecting” the hospitals and medical staff. But the reality is that the medical staff don’t need guns to protect them, but adequate equipment, staff, and infrastructure.

Furthermore, the turn to militarism in situations like this escalates what levels of militarism we are willing to accept in our lives. It impacts what becomes the new normal. In the US, for example, before 9/11 there were not soldiers with machine guns in airports and train stations; now that is part of the every landscape: automatic weapons as you commute to work.

It also exacerbates racism, xenophobia, and an outsider-insider mentality. The vast economic investments in militarism have always relied on tensions between communities and groups. In a time of crisis, these are easy tropes to fall back on and reinvest in, or create anew. Doing violence to others to protect one’s self or one’s group is portrayed as a natural, even noble response. But in reality, it is just allowing the worst of the human spirit to prevail at the expense of what could be collective good.

Instead of militarism, we need redirection of funds to social and environmental wellbeing. But we also need a radical reimagining of our security infrastructure and ideas. We are all in this together (separately). We cannot overcome this crisis—or any of the future crises waiting for us in our highly interconnected, interdependent world. We cannot wall ourselves from others. We cannot kill those who we think threaten what is “ours”.

This is also the time to recognise that inequality kills and that solidarity, as a proactive, political act, is what will help us overcome this crisis and those that await in the future. We share a common fate—if nothing else, this pandemic should help illuminate that for us all.

Everyone everywhere in the world is suffering and will suffer, to greater or lesser extents, from the health, economic, social, and psychological impacts of this virus. It is a global, shared experience, and requires a global, shared response. Some countries are better equipped to deal with the aftermath of the pandemic, while some countries are already depleted of resources and ridden with problems. Their ability to respond to the pandemic and the inevitable economic crisis will greatly depend on the level of solidarity we manage to muster.

Organising for peace and prosperity

Part of that global response of solidarity means investing in the local: local food production, local systems for support. It means investing in preventative healthcare, community health and human well-being so that we create resilient communities. But local does not mean isolationist. Local does not mean we cut ourselves off or reinforce an us vs. them mentality. Instead it means a turn away from the exploitation of humans, animals, and the environment that goes along with our current overreliance on transnational corporations that put profits over people and planet. It means a turn towards developing more resilient local economies and food production. It means a turn away from the production and sale and use of weapons and violence to “secure” states or citizens, towards disarmament and demilitarisation.

Compassion, care, and collective action will see us through this crisis, and will be the bedrock upon which we can build a world beyond capitalist exploitation, militarised security, and environmental destruction. The time to start imagining and structuring that world is now.